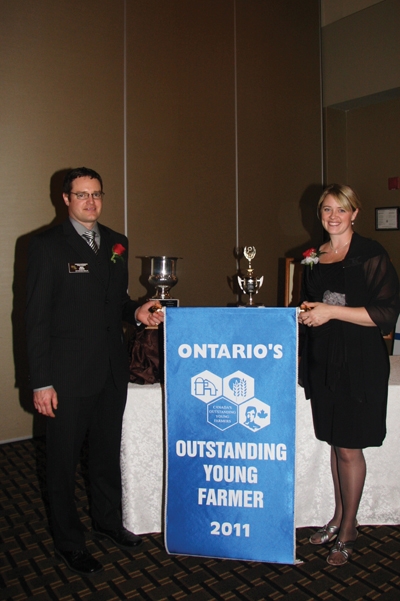 When you do something, you do it to the best of your ability, and whatever is done in the present, will have an effect on the future.” Those words sum up the philosophy of Wes and Briar Wiens, the 2011 Ontario Outstanding Young Farmers.

The Wienses, of Gemmrich W. Nursery in Niagara-on-the-Lake, received their award at a banquet held in Ajax on March 11. They will represent Ontario at the national OYF event to be held later this year in Brandon, Man.

Nominated by the Grape Growers of Ontario, Wes Wiens was born and raised on a grape and tender fruit farm in Niagara-on-the-Lake and learned two important lessons early on in life – that agricultural success is built on innovation and adaptation, and that agricultural survival is attained through commitment and stamina. He feels that “both of these life lessons have helped me become one of Canada’s leading grapevine propagators.”

As one of Canada’s leading propagators, Gemmrich W. Nurseries (www.gwnvines.com), named after Wes’s mentor and former partner, Martin Gemmrich, a third-generation propagator of grape vines, has been able to benefit from steady market share gains. Within the last five years, the nursery’s production has almost doubled to respond to customer demand.

Commitment to quality supersedes all other aspects of management practices at Wes and Briar’s nursery. They add value to the operation by providing services such as producing potted vines, doing custom grafting and brokering for imported vines. They are also affiliated directly with another family operation that provides custom planting, trellising and harvesting services, making them a one-stop operation. In the future they would like to add vineyard GPS mapping, soil sampling, viticultural consulting, missing vine counting and over-grafting to their list of services.

The Wienses find that keeping up with new developments in the industry is challenging, as there is no educational institution that deals specifically with viticulture propagation. Because of this, they and their management team have travelled to more established wine regions around the world in order to learn more about their practices and technological advancements. Wes has also made it a priority to focus on the farm’s own research and development program, but conducts joint research projects with various educational
institutions, including the Vineland Research and Innovation Centre, Brock University and Niagara College.

Wes has also been a director for the Grape Growers of Ontario, a member of the Canadian Grapevine Certification Network and a member of the American Society of Enology and Viticulture. The whole family, including their four children, Kaityn (8), Berlin (6), Rowan (4) and Addisyn (1) are heavily involved with their Community Church, and with regional minor hockey and base-ball teams.

Winners of the award are chosen based on career progress; environmental and safety practices; crop and livestock production history; financial and management practices; and
contributions to society. The judges, Jim Glenn (OOYF winner in 1986), Terry Daynard (retired from Ontario Corn Producers’ Association and the University of Guelph), and Marlene Werry (Durham Region economic development officer) chose the Wienses in part because of their industry-leading innovations and commitment to their product quality and customer service.

“Spending time with such imaginative and successful young farmers reminds us all that farming is a rewarding occupation and we need to keep that in mind more as we deal with our daily challenges,” said Eadie Steele, co-chair of the 2011 event. “The Ontario finalists showed the diversity of Ontario agriculture too, representing the dairy, horticultural, wine, goat, cropping and agri-tourism sectors.”

Celebrating 31 years of identifying great agricultural successes, Canada’s Outstanding Young Farmers’ program is an annual competition to recognize farmers that exemplify excellence in their profession and promote the tremendous contribution of agriculture. Open to participants 18 to 39 years of age, making the majority of income from on-farm sources, participants are selected from seven regions across Canada, with two national winners chosen each year.

For information on all of the finalists, visit the Ontario OYF website at www.oyfontario.ca.