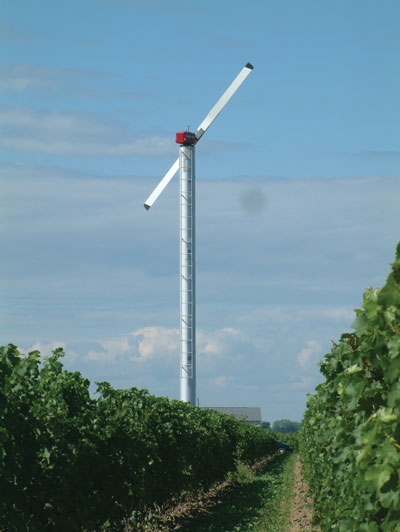 Growing vine grapes in cold climate areas can be a challenge, particularly when winter temperatures dip below -25 C and late spring frosts strike just as the vines are preparing for warmer temperatures.

A wind machine can be a useful machine for wine growers with vines in frost susceptible areas, according to Joe Pilliteri, owner of Lakeview Vineyard Equipment. And in 2012, some weather made it seem like everybody was in a susceptible area.

“This is one piece of equipment you are going to borrow money for,” said Pilliteri during the 2012 Atlantic Canada Wine Symposium held in Halifax, N.S. “This is a machine it makes no sense not to borrow for.”

Ken Slingerland, who joined Lakeview recently after 36 years with the Ontario Ministry of Agriculture, Food and Rural Affairs as a vineyard specialist, explained winter stress injury can cause vine collapse and aggressive sucker growth. Most winter stress injury occurs about four to six inches above the ground in the vineyard, he said, adding crown gall is endemic in Canada as a result of winter injury.

“That is why we can get sub-zero temperatures and the grapevine will continue to grow.”

But even with a well-planned vineyard, growers are still at the mercy of Mother Nature. On one night in 2005 when the temperature plunged to -25 C in the Niagara area of Ontario, more than $25-million worth of grapes in farm gate value was lost, explained Slingerland.

“After that, a lot of growers decided [that] if they were in the industry for the long haul, to get wind machines.”
As a result, the Ontario vineyard industry has been swift to adopt wind machines.

With one wind machine, about 15 acres of vineyard can be covered, protecting about $100,000 worth of crop, he said.

When positioning a wind machine on a cement pad in the vineyard, Slingerland advised growers to consider the vineyard’s slope, the drift of the land that directs the airflow over the vineyard’s surface and the prevailing winds over the site. The blade of the machine should angle down about six degrees from the horizontal plane.

“If the hill is steep we use a tilted head,” he said.

The capital cost for one machine – which has a service life of about 35 years – is about $34,000 with an annual fuel cost of about $840 on average, said Slingerland.

While wind machines are equipped with mufflers and are very quiet, they can also create an oscillating sound as the machine head rotates every five minutes. It’s recommended they be set back at least 400 feet from property lines and away from neighbouring homes if possible.

“Be proactive,” said Slingerland. “Visit your neighbours before you install the machine.”

If wind machines are beyond your price range, Slingerland said, oil-fuelled heaters are another protection method. Smoke will rise, then spread out showing the height and location of the inversion layer. Under freezing conditions, the heaters can be effective but also expensive as many of the burners will be required, he added.

An intense bonfire in the vineyard can also help break up an inversion layer, as will a low-flying helicopter, said Slingerland, adding that it is expensive to rent a helicopter at $1,000 an hour and it must return over the vineyard every six to eight minutes to ensure the air doesn’t stratify again.

A forced-air displacement system will also work by pushing air up into the inversion but it will only work on very small acreages and in very small spots.

“It is a very site-specific system,” Slingerland said.

Spraying water is another age-old frost preventive method but “if you run out of water, it will freeze on the vines,” he said.