For the 2017 Grape King, Doug Whitty, being a grape grower comes first and a winery owner second 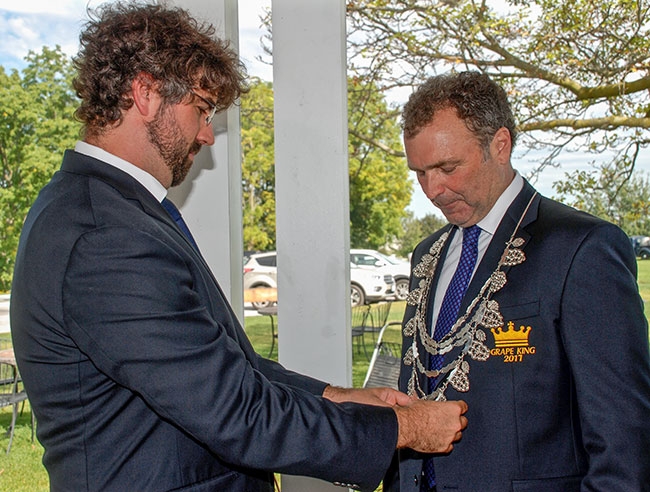 From one winery owner and grower to another: Jamie Quai passing over the chain of office to 2017 Grape King Doug Whitty. Photo by Jim Meyers

It’s often been said that a grape grower’s heart and soul is in the vineyard. Even though Ontario’s new grape king, Doug Whitty, may be the latest of three kings to either own or have strong ties to one winery, he believes that future royalty will be stand-alone growers, as in the past.

Whitty is co-owner of 13th Street Winery, located just outside St. Catharines, Ont., and is the 61st titular head of the Niagara Wine Festival. In Ontario, many winery owners are growers first because they are compelled to have a minimum amount of vineyard acreage on the winery site.

While having a Grape King – or Queen – may seem like a quaint nod to the past, the title serves as reminder to folks sipping wine at festival events that what they’re enjoying started in the vineyard. Some 500 growers are members of the Grape Growers of Ontario, which has always been a major financial contributor to the festival, held in mid-September when the grape harvest begins.

Each year, a hand-full of growers is nominated by their peers and their vineyards are judged by a trio of experts from grape-growing academia. The crowning ceremony is most often held in the new grape king’s vineyard and is attended by previous kings and queens and by those affiliated with grape growing.

“Many are my friends and neighbours from whom I have learned a great deal,” said Whitty, 54. “It is a humbling experience to find myself listed among them (grape kings) now.”

One of those is Whitty’s uncle, Rodger Whitty, crowned in 1983.

With the title goes the bling – a chain of office with the names of past recipients designed and created by former grape king Howard Staff. As well, there’s a tailored jacket to be worn at ceremonial events, such as the annual trip to Canada’s other large grape growing region in British Columbia.

At an evening festival awards banquet two days after Whitty’s crowning, the new grape king commented on how fast celebrity status can come in an age of social media. He had received some 21,000 comments on his Facebook page by that afternoon.

“I don’t feel a whole lot more powerful than I did when we were posting [putting in posts] for a new Pinot Gris vineyard [the day before the crowning],” he admitted.

13th Street Winery isn’t the home farm – neither is it at that address – but it’s become a home-away-from-home for Doug’s 92-year-old father, Joseph, who can be found most afternoons – in good weather – on the front porch “surveying his domain and talking to customers.”

“He still comes out every day to make sure we’re doing things right,” said Whitty. “Look at the size of his hands. He has done a lot of hard work in his life and more than anyone else made today possible for us.”

The “us” is Doug, his wife, Karen, and their three sons: Luke, 24, Ben, 22, and Thomas, 18. There is also some 30 employees at the winery and bakeshop plus on Whitty Farms, a roadside market garden and pick-your-own just down the road.

“It started out as a skid of peaches and a roadside cardboard sign and then a tent in season,” Whitty said about the market near the 110-year-old family farm. His ancestors left Ireland during the historic potato famine and came to Canada in the 1840s to farm near Kingston. His great grandfather – one of 13 children – came to Niagara in 1906 and worked on a fruit farm in Grimsby before buying his own farm in 1908.

Seven years ago, Doug and Karen partnered with another couple they knew who grew grapes. Together, they bought an existing winery (on 13th Street) founded in 1998 by four amateur winemakers. They kept the name at its current location where 55 acres of grapes are grown.

Whitty is the operational manager of the winery and bakeshop and, like any good businessperson, knows success means having good employees. He heaped praise on his long-time farm and vineyard manager, Randy Gillespie, for what judges didn’t find in his vineyards.

“They asked to see the Chardonnay specifically because it had been a wet summer and the white grape variety is prone to mildew,” he said. “I wasn’t worried about what they would see. I was confident, primarily because of [Randy’s] work. Anyone who knows our farm well knows that to a large extent, the wheels turn here because of his efforts over the last 20 years.”

A late spring combined with rainy and cold weather over the summer gave way to two weeks of unseasonably hot, dry weather just as the harvest was about to begin. That gave grapes the bump needed to make the sugars needed to produce what may be a notable vintage year with a predicted harvest of some 45,000 tonnes.

For the Grape King competition, growers are judged on nine categories. Seven are what would be expected — cultivating harder-to-grow varieties; management of diseases and insects; weed control; soil management; canopy control; overall vineyard management, and a miscellaneous category based on cold and frost risk. Potential Grape Kings can be in a close race up to that point, but behind on outreach – a grower’s activity and involvement in research projects in the industry – and innovation – the adopting of new technology and growing practices.

“Over the years, we’ve participated in a lot of pest and soil research projects,” Whitty said.

Since the winery is close to the city limits, one research project has examined the effectiveness of netting to control birds compared to the use of bird bangers.