Catching up with the B.C. fresh potato industry in a pandemic year. 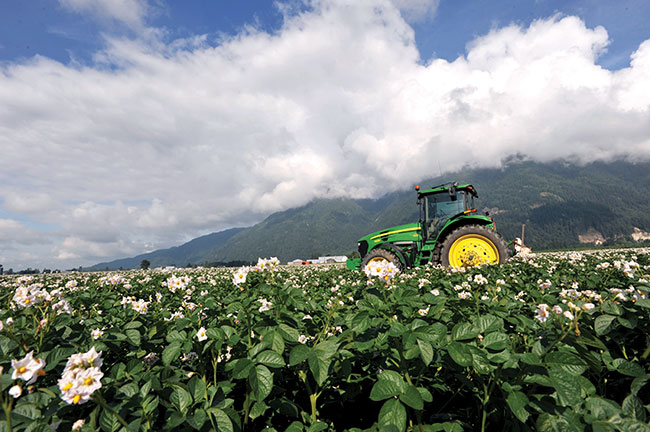 With COVID-19, demand for potatoes increased substantially as consumers first began to stay at home and eat their home cooked potato choices. Photos courtesy of BC Fresh.

The COVID-19 pandemic may have slowed down other industries, but not British Columbia’s fresh potato industry. Farmers across the province saw excellent conditions and an increased demand leading to a successful fresh potato growing season.

“It’s been a great growing year, probably one of our best,” says Peter Guichon of Felix Farms in Ladner, B.C., which grows 13 varieties of potatoes.

“We planted early which is key. We’ve only finished planting in May three times in the past 25 years and that’s really key in a good year. The earlier you plant there’s longer growing days. Two weeks planning time is critical.”

Guichon says that other than extra health and safety precautions on the farm, the pandemic didn’t affect their growing season.

“COVID-19 did not affect our season. We just had to take precautions with our staff. It was a challenge, but manageable.”

The pandemic did affect the BC Potato and Vegetable Growers Association potato variety field day, which Felix Farms participates in. The field day was capped at allowing only 20 people an hour in.

As they go into the next growing season, Guichon says that they’ll proceed as usual.

“We’re just going to keep growing potatoes, as long as we keep selling them, we keep growing them. Our business doesn’t change a lot. We’re always experimenting with new varieties. Some things suit this area better than others. Some varieties do well here and not do well elsewhere.”

A popular yellow variety for them this year has been the Agata and the Orchestra.

“The Agata, it’s an oblong, yellow and it yields very well. It’s a pretty looking potato.”

The United Potato Growers of Canada (UPGC) noted earlier this year that the amount of potatoes in storage for Canada’s fresh potato sector was 11.3 per cent below the three-year average. The lower volumes in storage were due to the increased demand from consumers who were cooking potatoes with their meals at home.

“B.C. tends to be one of the earlier provinces to move their crop so a lot of production had already gone to market when the COVID-19 pandemic appeared in early March. Initially, as in other provinces, demand increased substantially as consumers first began to stay at home and eat their home cooked potato choices. Demand did level out over time but was still above average for fresh or table potatoes,” says Kevin MacIsaac, general manager for UPGC.

MacIsaac says that overall, it’s been an excellent growing season for B.C. growers.

“The season has been an excellent growing season for B.C. growers, in fact one of the best regions in the country, due to timely rains, good temperatures, timely planting and now good harvest conditions. Yields are expected to be above average (likely record setting at 330 cwt./acre) which would be above last year’s 325 hundred weight per acre.”

MacIsaac adds that red and yellow varieties continue to be popular across B.C., with the Russet Norkotah being the most popular.

“Generally red varieties are very popular and have been increasing in demand. The largest acreage of red potatoes in B.C. has been the variety Chieftain. Yellow potatoes have also maintained their popularity. Yukon Gold has been the most popular variety in B.C. over time but we are now seeing a shift to more yellow varieties of European parentage which are higher yielding.”

In Alberta, fresh potato storage is 75.7 per cent lower than the three-year average.

Russ Van Boom of Ruskei Farms near Edmonton grows seeds for fresh and processing. The farm currently seeds close to 5,600 acres each year but saw some losses due to the pandemic and weather conditions.

“It was difficult to do with all of the uncertainties and with what the impact was going to be with COVID and peoples eating habits and such. We were able to toll ahead anyways. We cut back a little bit, but decided to plant fairly close to our typical acres,” Van Boom says.

Van Boom’s farm experienced some setbacks due to rainy conditions.

“Through the months of June and July we had an inordinate amount of rain which led to some negative results in the field where we lost between 10 to 15 per cent of our acres due to drown out,” he adds.

Van Boom says despite this, he’s optimistic about the future.

“I think, like all farmers hopefully, we are optimists and want to see things return, maybe not to exactly how it was before but very near. At the end of the day we know that people still need to eat, so whether that be in the format of a french fry or people cooking potatoes for themselves at home, I do believe that the potato will continue to be a very good fit. It’s nutritious and economical and we’re choosing to believe that it [COVID] might change the way our business goes a little bit in terms of what varieties we grow and markets that we’re trying to hit, but in the bigger picture of total potato acres, I would hope it would stay somewhat similar.”

Cory Gerrard of Rod Swenson Farms also recounts a successful growing season. They grow several types of potatoes, including Kennebec. They have a farm in Delta, B.C., but also have land in Abbotsford as well as a farm in Kamloops.

“We had a really good weather year for potatoes, that was definitely the positive. There was a bit of a scare in September, we got 3.5 inches of rain, but I’m pretty sure everyone has gotten their potatoes out now into the market for the winter,” Gerrard says.

Gerrard says that while things slowed down for processing potatoes, there was no impact on the fresh variety.

“We had a really good growing year, yields are above average for sure. We obviously had a bit of a scare in March when COVID hit. Sales slowed for fresh cut french fries but sales for other potatoes on the market grew.”

Across the Canadian potato markets, the pandemic brought a market rush to fresh and chip potato growers. While processing and seed growers were not as fortunate, uncertainty is the only constant in farming and growers like Van Boom are choosing to remain optimistic.