Jordan and Alex McKay of Willowtree Farm have developed a number of innovative ideas to boost their direct sales. 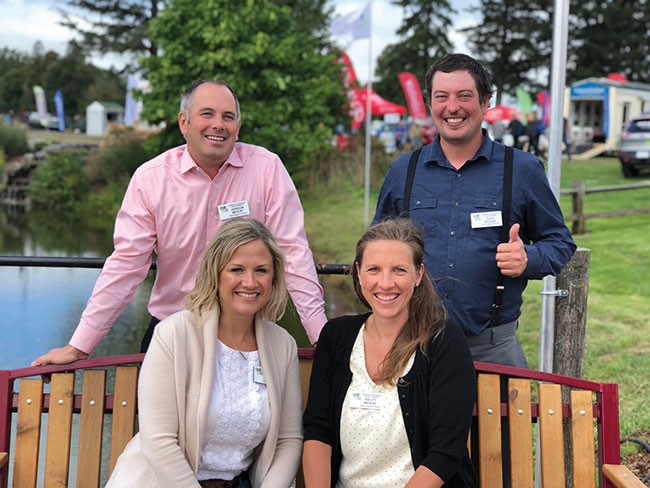 Jordan and Alex McKay, with their wives Alyson and Kelty, operate Willowtree Farm, one of the most diverse direct-sales operations in Canada.

Selling directly to consumers is a strong trend in farming these days, and it’s no wonder why. More profit is kept by the farmer and demand for local food is higher than ever. Consumers also want to get to know, if they can, who produces their food.

While Cathy Bartolic, executive director of Ontario Farm Fresh, an association for farmers who focus on direct sales, says there is no official record of how many farmers in Ontario sell directly, membership at her organization has just about doubled over the last few years and now totals approximately 300 farm businesses.

“There seem to be a lot more people interested in trying direct sales and also trying their hand at farming as a second or first career. About 15 years ago, you didn’t see a lot of the next generation coming back to the farm to take over, and now they’re doing this. Direct farm marketing is a factor,” Bartolic says.  She adds that there are also more farmers who are diversifying their direct sale offerings to include honey, maple syrup, meat, wool products and much more.

Among the most diverse direct-sales operations across Canada is Willowtree Farm in Port Perry, Ont. In addition to wholesaling some berries and garlic, Williowtree Farm owners Jordan and Alex McKay, with their wives Alyson and Kelty, sell directly to customers through CSA (community sourced agriculture) memberships, farmers markets, pick-your-own, on-farm events and online orders. They also sell products made with farm ingredients at their bustling on-farm store. In 2016, the young farmers expanded the operation with a café, butcher shop and commercial kitchen.

For all this, and for also employing a variety of innovative and sustainable cropping practices, the McKays were named Ontario’s Outstanding Young Farmers (OYF) for 2018. They also went on to become one of two sets of farmers nationally recognized as Canada’s Outstanding Young Farmers. These achievements follow not one but two regional Premier’s Award for Agri-Food Innovation Excellence, in 2011 for their custom planter and drying system for garlic, and in 2016 for their fresh produce box school fundraiser program.

Farm origins
Willowtree Farm was started by Jordan and Alex’s parents Rod and Marlene McKay, who sadly both passed on in recent years. Rod had farmed cash crops and dairy, and in 1979, he surprised Marlene with four acres of strawberry plants. As the years went by, they grew that acreage and also planted other horticulture crops. Marlene started selling produce at farmer’s markets, and in 1990, she and Rod built their own market on the farm. By 1993, they moved out of dairy production to focus on horticulture crops and beef cattle.

Meanwhile, their sons Jordan and Alex had grown, attended university and done some travelling, at which point, both had settled on the idea of returning to the family business. Alex had inherited their father’s love for the art and science of growing crops, and Jordan their mother’s passion for direct marketing.

“Our strengths are different and complimentary,” Jordan says of his brother. “With our wives, we very much run the farm as a team of four. We have a weekly meeting to go over everything and we respect each other. We each have our part of the business to grow and change as we see fit, to pour our passion into.”

In 2015 the McKays pursued building a year-round store with a café, which was completed by 2016. They currently do a CSA program of meat and produce for 300 customers and sell at 12 farmers markets. However, Jordan says their overall goal is to drive customers to the store and café.

Currently, the CSA and farmers market business add up to about a quarter of retail sales, but Jordan says both marketing streams remain a good way to bring customers to the farm. The Willowtree team also markets a number of on-farm events every year.

Besides growing a customer base, Jordan says the focus on bringing people to the farm is also driven by hot competition for direct sales.

“Mamma Earth is a huge direct food delivery firm in the Toronto area, Longo’s grocery chain also does this, and Amazon Fresh is coming,” he observes. “As important as the CSA is, when everyone jumps in the margins get smaller. And, it’s not an innovative concept anymore. We have to stay ahead of the curve. Our present and future success is focused on providing a farm visit experience where you can see your steaks being cut fresh in front of you, eat fresh soup or meat pie made with on-farm ingredients, picking your own, learning about maple syrup and more.”

For Willowtree, this strategy is definitely working. In spring 2018, the farm store and café increased sales by nearly 60 per cent from the year before, and (even with road construction this past summer) it was still almost 25 per cent ahead of 2017.

Crop cultivation
On Williowtree Farm, Alex McKay uses a wide variety of sustainable practices, such as rotation, Integrated Pest Management, and cover crops. Mainstay horticulture crops are garlic and strawberries, along with sweet corn, tomatoes and about 25 others. Daikon Radish, Mouse melons, tomatillos, eggplant, collared greens and other specialty crops are used in café dishes, but also keep interest in CSA baskets strong.

Alex is currently experimenting with raised beds, which provide drainage of the farm’s clay soil. He is also working with trickle irrigation, and is using plastic for weed control and to get crops started early. He has increased specialty crop seedling production every year, which now runs in a heated plastic greenhouse. The ambitious young grower also started microgreens this past fall.

Willowtree’s day-neutral strawberries suffer from several pests and diseases, which requires a lot of scouting. Nematodes in the garlic have also been a concern. To minimize this threat he plants visibly nematode-free cloves in raised beds and uses a five-year rotation, and also sprays once for leek moth.

Jordan and Alex McKay, with their wives Alyson and Kelty, operate Willowtree Farm, one of the most diverse direct-sales operations in Canada.

Looking forward
Sales growth is expected to continue at Willowtree’s store, and bigger online sales of various products and programs, such as a dinner club and custom-made gift baskets, are also expected. The Willowtree team also wants to hold more successful on-farm events.

As you read this, the McKays are busy planning a 2019  Willowtree maple syrup event, complete with homemade pancakes and maple sausages, wagon rides to the bush and a big campfire. Easter activities will follow, as will the farm’s second annual asparagus festival in May. The farm always holds a corn roast in August, and ever-bearing strawberry events in September to show consumers the long season, followed by a Pumpkin Palooza fall festival.

In 2019, they may also repeat a very successful, ‘Bacon, Brussel sprouts and Brews’ event. First held in November 2018, the event featured craft beer and cider paired with on-farm food, and pick-your-own brussel sprouts. The Willowtree team is also greatly looking forward to the OYF national event.

“We are honoured to be recognized,” Jordan says. “It’s humbling, as it’s such a progressive and dynamic group. The big strength of being recognized is that we’ve now made so many connections with other farmers and alumni. There were alumni there from 20 years ago, welcoming us ‘into the family.’ We can’t wait to attend OYF 2019 later this year.”

Jordan adds that part of the farm’s mission going forward will be continued public education. While the four young farmers believe the demand for safe, local food is stronger than ever, they also believe there is a distinct disconnect between consumers and agriculture.

“The challenge is to get your story across, no matter what sector you’re in,” Jordan asserts. “When people can see a face and family behind their food, it makes them feel better. We all need to work together to get our stories out, no matter what we produce.”