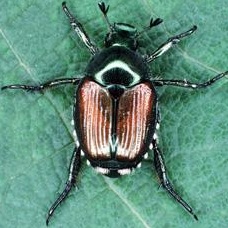 March
12, 2010 – Geraniums may hold the key to controlling the devastating Japanese
beetle.

March
12, 2010 – Geraniums may hold the key to controlling the devastating Japanese
beetle.

The
beetle, Popillia japonica Newman, can feast on a wide variety of plants,
including fruits and vegetables. But within 30 minutes of consuming geranium
petals, the beetle rolls over on its back, its legs and antennae slowly twitch,
and it remains paralyzed for several hours. The beetles typically recover
within 24 hours when paralyzed under laboratory conditions, but they often
succumb to death under field conditions after predators spot and devour the
beetles while they are helpless.

Agricultural Research Service
entomologist Chris Ranger at the agency’s Application Technology Research Unit
in Wooster, OH, is working on developing a way to use geraniums to control the
beetles.