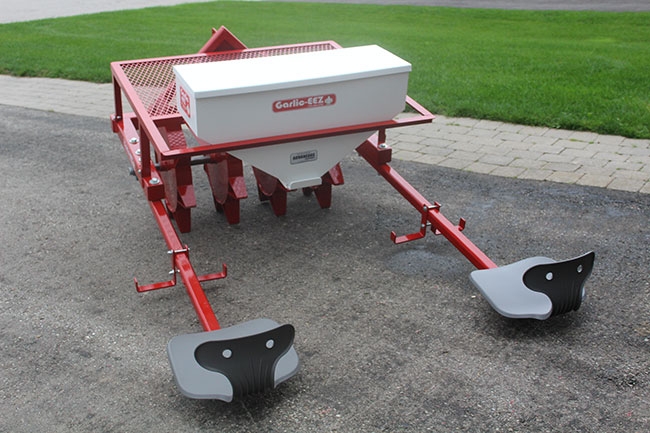 The Garlic-EEZ planter is available in a standard or customizable model, and weighs in at about 450 pounds. Contributed photo

When a new crop takes off, it’s not unusual that specialty equipment is designed and commercialized in order to make things easier. In this case, the crop is garlic, and the equipment is a planter and an add-on under-cutter (both pulled behind a tractor), designed and manufactured by Garlic-EEZ of Dundalk, Ont., owned by garlic grower Ken Hunt.

After building several prototypes in 2015, Hunt started marketing the Garlic-EEZ equipment over the winter of 2015/2016 and sales have gone very well. The planter is available in a standard or customizable model, and weighs in at about 450 pounds. With two people on it, Hunt says you can plant up to 2,400 cloves per hour. The under-cutter (attached to the planter) is used at harvest, scooping the earth under the bulbs to loosen them for hand pulling by workers sitting on the planter.

Hunt says bringing the machinery to market could not have happened without the assistance of his good friend Doug Gilbert at AdvanEdge Technologies and Welding in Dundalk, Ont.

“In addition, my wife Shelley and my daughters Hollie and Emma have all contributed to help make Garlic-EEZ successful,” he says. “We are not only equipment manufacturers we are also lovers and growers of garlic. We are currently renting farmland where we grow two to three acres.”

Hunt says the biggest challenge in building the planter prototypes was making them progressively heavier.

“It just wasn’t strong enough, so we went to heavier gauge steel, heavier shaft and bearings, and that took time to work out,” he notes. “We also added the storage hopper and the storage shelf so that you can stay in the field planting or harvesting for a long, long time. We were determined to not give up on this planter. And still to this day, we continue to improve it. We recently added a hinge to the hopper lid, for example.”

With the under-cutter prototypes, Hunt also upgraded the steel and eventually went with a knife-edge bevel for cutting through the ground more easily.

Customization requests for the planter have included swivel seats and a sun umbrella. Some people also want extra wheels, which Hunt says allow more rows to be planted all at once of garlic or other crops such as ginseng and potatoes. Some customers also want to use the machine with only one person on the back, which requires an extended foot bar. He believes that “pricewise for the little guy, this is the unit you want to have. This has been told to me again and again. People have also commented that they like that there’s nothing that can break. It’s a simple, solid design.”

Paul and Lorraine Irwin of Boar’s Rock Farm near Meaford bought both a Garlic-EEZ planter and under-cutter in spring 2016. He harvested 9,000 plants this year and planted 32,000 seed this fall.

“I’ve always had a huge vegetable garden and had always wanted to try garlic,” he says. “I started with a few bulbs five years ago and have established my own seed stock. I’m very concerned about disease and parasites from other farms.”

Irwin has stuck with the variety Music and made his first sales this year. He plans to sell mostly through local retailers.

“I saw Ken’s ads early in 2016 on Kijiji and called him up and went and saw the machines,” Irwin remembers. “Ken’s place is only about an hour’s drive away.”

He says buying both the planter and under-cutter have been very worthwhile.

“If you are planting 2000 or more a year, you should get them,” he says. “They should last you decades, a lifetime. I’ve had no problems. I called Ken about having the seats closer to the ground and he was unbelievably helpful, explained about subbing in different bolts.”

In early October, Irwin had just done a practice planting, and with two people planting four rows at once, he says they easily planted 2,000 seed in an hour.

“You have to prepare your soil in advance and the planter makes little holes set at whatever spacing or row width you want,” he says. “With the under-cutter, we harvested our entire harvest of 9,000 bulbs in a short period of time, and I asked my son what he thought afterwards and he said it saved us an entire day. I agree. You could harvest an entire acre of 40,000 to 50,000 plants in one day. It was very dry in our area this year and it would have been very tough to harvest without it.”

Irwin says Garlic-EEZ equipment is great for the small operator.

“We’re excited that Ken is looking at designing a splitter/separator to split the cloves in bulbs,” he says. “That’s a very time-consuming, labour-intensive job and I’ve spend thousands of dollars this year on labour for that.” 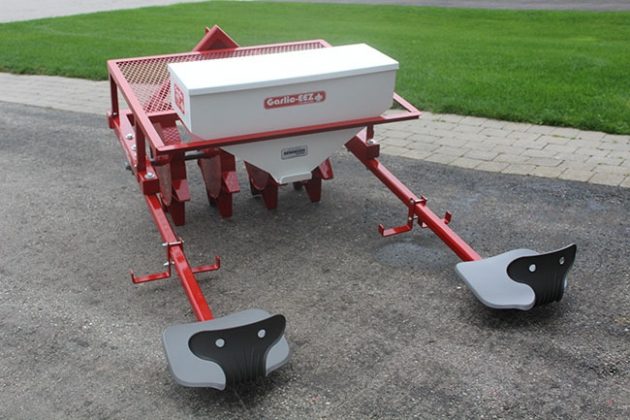 The Garlic-EEZ planter is available in a standard or customizable model, and weighs in at about 450 pounds. 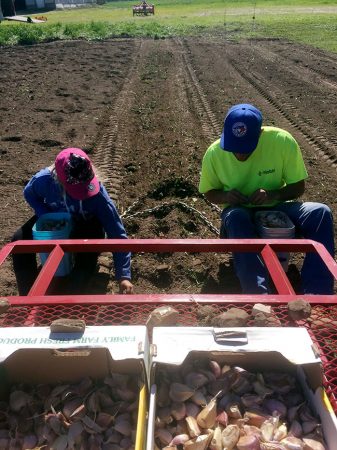 Joanne Stroud is in her first year of major garlic production (about 1.5 acres of Music and Purple Stripe varieties) in St. Mary’s after years of growing smaller amounts for fun, to give to family and friends.

“We were thinking of building a planter ourselves and I was on Kijiji and put in ‘garlic planter’ and found Ken’s machine,” she explains. “I bought the planter recently and I didn’t find it expensive at all for what you’re getting. We’ve done a test run so far and I’m very pleased. It’s a really well built machine, solid with huge bearings and doesn’t have a lot of parts that could break down. It’s a simple design and very practical. I will for sure be buying the under-cutter next summer; it’s a no-brainer. And Ken’s been very helpful with everything; the machine, growing garlic, everything.”

Hunt says Garlic-EEZ has sold many planters and under-cutters across Canada with not one complaint.

“Ontario, British Columbia and Quebec seem to be our main focus, with many potential customers contacting us from the United States and from around the world,” he shares. “We plan to ship to the U.S. in the near future. We have a sales rep in Montreal, in Eastern Ontario and independent salespeople in B.C., but word of mouth has been huge, as well as Facebook and Kijiji and the website.”

Hunt has been very surprised at how much it has cost to design, build prototypes and market a new product. His prototype for a garlic harvester has not worked out well and he’ll return to the project this winter.

“You don’t get your money or time back when a prototype doesn’t work, but you do learn a lot of lessons,” he says. “The expense of the whole process has been a bit astounding, but if I had to do it all over again, I would not do anything differently. Collaborating with experts is so important. Doug has been indispensable. And having family support is great. My daughters have done things like help with painting and they also came up with the name. What’s also been really important is asking questions and listening to all kinds of people – farmers, equipment builders, friends, relatives. You learn so much by asking all sorts of people their thoughts, but especially those of older generations with years of experience.”