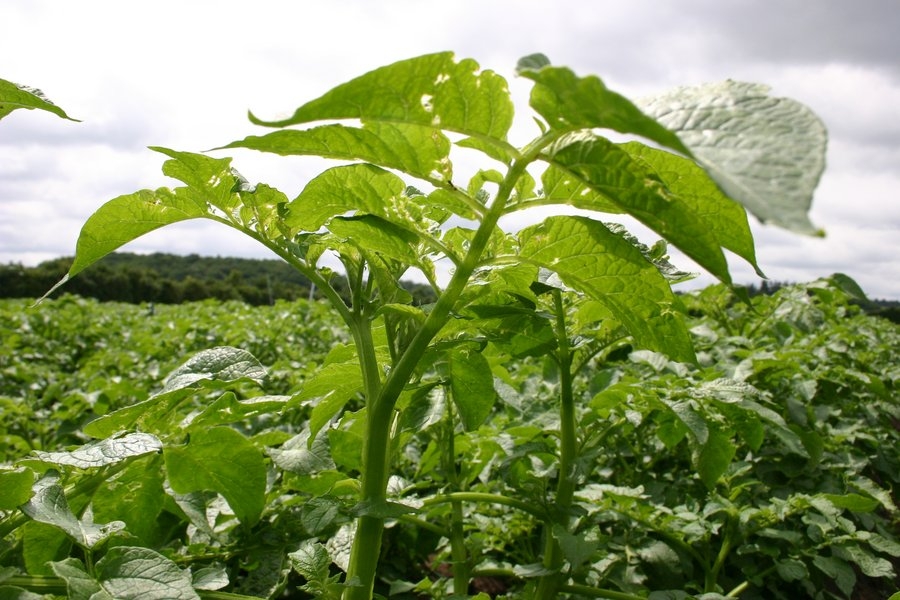 A special group of fungi can support the potato plant when it is stressed by a deficiency of water and nutirents. Janne Hansen

October 5, 2016, Denmark – Life can be difficult for a potato plant when the soil is thirsting for water and nutrients – unless the plant is given a helping hand from a certain group of fungi.

Water and phosphorous are limited resources, so agriculture needs to use them economically. The problem is that saving too much can affect yield negatively. Since the world’s population needs food, the trick is to produce as much food per unit of water and phosphorous as possible by using the resources optimally.

One of the ways in which to do this is to take advantage of a special group of fungi – the so-called arbuscular mycorrhizal fungi (AM fungi). The fungi live symbiotically with plant roots. Previous studies at Aarhus University have shown that the fungi can improve growth and yield in wheat that is stressed by drought.

In the course of her PhD studies, Caixia Liu from the department of agroecology at Aarhus University, investigated if the same was the case for potatoes that are stressed due to a deficiency of phosphorous and water. Potatoes are quite sensitive to drought and phosphorous deficiency because of their relatively small root system.

Previous studies at Aarhus University have shown that significant amounts of water can be saved if potatoes are irrigated alternately on each side of the ridge while leaving the other side dry – the so-called alternating partial root zone drying.

Liu carried out a series of trials with various combinations of irrigation (either full irrigation or alternating partial root zone drying), phosphorous fertilization (none or 0.11 mg P/g soil) and inoculation with AM fungi (inoculation or no inoculation). She found that minimal irrigation reduced the potatoes’ uptake of nitrogen and phosphorous and reduced yield.

This is where the AM fungi come to the rescue. Liu found that inoculating potatoes stressed due to a scarcity of water and nutrients with AM fungi cancelled out the negative effect. That was not all. In potatoes that were not stressed by drought or nutrient deficiency there was also a bonus.