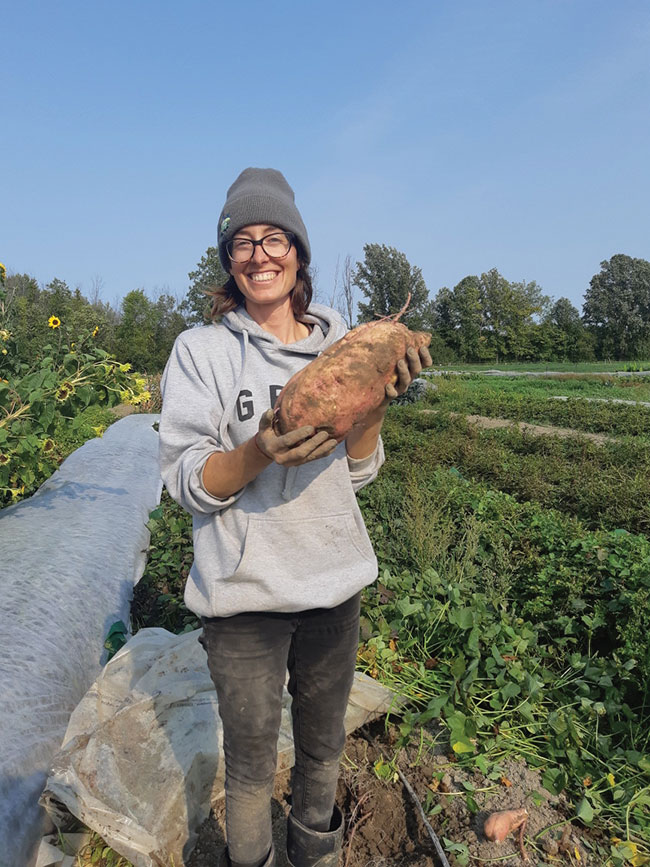 Kate Garvie of Heartbeet Farm hoists a sweet potato from the collaborative short-season crosses trial her farm participated in. photo courtesy of the Ecological Farmers Association of Ontario.

2020 marked the fifth year of the Ecological Farmers Association of Ontario (EFAO) Farmer-Led Research Program. The goal of the program is to help EFAO’s member-farmers combine their curiosity with scientific rigour to answer their most challenging on-farm questions. In its first five years, more than 60 different farmers have conducted over 70 practical, on-farm trials.

You can read project reports, listen to audio summaries by farmer-researchers and watch videos from the trials at efao.ca/research-2020.

Project: Regeneration of fallow fields for vegetable production
Why they were curious – Because land cost is high and land access is difficult, many vegetable growers have to start growing on degraded soil. Before they can start growing vegetables profitably, they need to raise soil organic matter and balance nutrients. Eric Barnhorst of Eva Mae Farm compared five methods to regenerate a fallow field in preparation for expanding his organic vegetable operation.

Cost to implement was correlated with active carbon: There was a nearly $3,000 difference to implement the control and the most intensive treatment with micronutrients, cover crops, chicken manure and woody compost. Balancing cost and soil health benefits, Barnhorst will focus on micronutrient application and full-season cover crops in areas that require regeneration, and he will use compost and heavy amendments to continue regeneration when the land is in production.

You can’t just bootstrap to healthy soil in one year: Even with gains in active carbon within the test plots, production areas in other parts of the farm that have had nutrient balancing and organic amendments over a period of years looked better than the highest input treatment he compared. 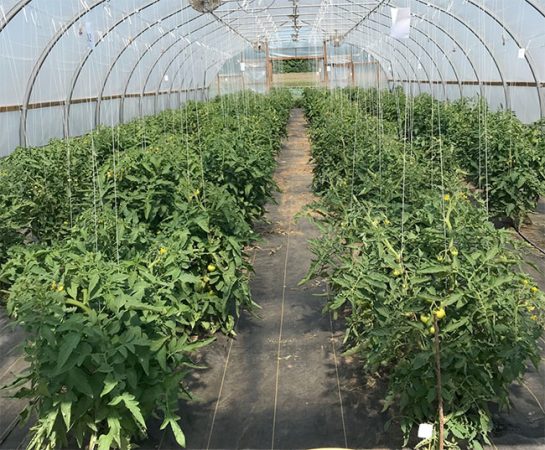 In search of short-season northern sweet potatoes: Variety trials of new sweet potato (Ipomoea batatas) crosses
What they were curious about – In the past 10 years, sweet potato consumption in Canada has doubled. As demand for sweet potatoes grows, three growers – Kate Garvie of Heartbeet Farm, Erin Richan of Highland Gem, and Lise-Anne Léveillé of BeetBox Cooperative Farm – wanted to identify the best-performing crosses of sweet potatoes for organic farming systems in the Ottawa area.

What they compared – Working off of data Garvie collected in 2019 and taste test data from winter 2020, they chose the top 12 crosses for slipping and then used the top nine slip producers as the crosses for this trial. They chose Covington as a check variety. On each farm, they set up a randomized complete block design with two replicates.

What they found – Three to five crosses are worth continuing to develop: All farmers recorded similar observations for the ten crosses. For Covington, the check variety, they all observed that it produced smooth tubers with no cracking and a large number of marketable tubers per plant, but farmers rated it lower compared to the trial crosses. For the trial crosses, they will continue three of the ten (SP2, SP5 and SP9), with an additional two (SP6 and SP7) that were also noteworthy.

What they were curious about – To maximize profitability of organic low-tech greenhouse tomatoes, Victor and Nathan Klassen of Nith Valley Organics wanted to find compatible rootstock for grafting large tomatoes (F1 and heirloom) and cherry tomatoes.

What they found – Not all rootstocks graft alike: They found that the best choice of rootstock was specific to the scion, with some rootstocks producing no yield improvement. The Caiman F1 yield was highest when grafted onto DR0141TX rootstock. They found no improvement to the “heirloom-like” hybrid varieties, but a significant improvement for open-pollinated Striped German grafted onto Fortanimo. However, they are unsure if this result is repeatable. For cherry tomatoes, Sakura on Fortanimo or Estanimo doubled the yield. •

The Ecological Farmers Association of Ontario (EFAO) is a membership-based non-profit that supports farmers to build resilient ecological farms and grow a strong knowledge-sharing community. Established in 1979 by farmers for farmers, EFAO focuses on farmer-led education, research and community building. EFAO brings farmers together so they can learn from each other and improve the health of their soils, crops, livestock and the environment, while running profitable farm businesses.