Despite continuous research on
late blight management, Dr. William Fry believes there’s nothing that
can beat management-intensive field scouting and forecasting for
preventing the disease in potato fields. 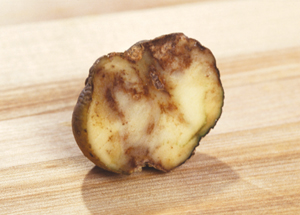 Despite continuous research on late blight management, Dr. William Fry believes there’s nothing that can beat management-intensive field scouting and forecasting for preventing the disease in potato fields.

Even with a belief in scouting and forecasting, Dr. Fry, a professor of plant pathology and senior associate dean of the College of Agriculture and Life Sciences at Cornell University, says cultivars with greater resistance are currently in development. The Solanum bulbocastanum wild potato has a resistant gene, he says, and some newer fungicides offer some promise against foliar and/or tuber blight.

The research is coming none too soon, he adds, since today’s late blight pathogen also has a broader range of hosts, including petunias, calibrachoas, some nightshades and some tobaccos.

“Tomatoes and potatoes are traditional innoculum, but petunias are another host,” says Dr. Fry. “Infected petunias have started infestations in tomatoes. The nightshade flowers, like hairy night shade, are also sources.”
In addition, late blight can no longer be considered a sporadic problem, he says. Instead, it’s a perennial disease producers need to anticipate dealing with each season.

For effective control, Dr. Fry says potato farmers need to implement a regimented spray program and monitoring system. Late blight is fast-moving and once a plant is infected, the pathogen is in the plant for three to five days before any symptoms are visible. Once it becomes visible, the whole disease cycle can happen quickly. Producers need to plan their spray effectively to ensure all new growth is protected.

“Increased frequency at low dosages of applications will trump increased dosages at less frequent application,” he says. Dr. Fry points out there is no silver bullet to control late blight, but a management-intensive, integrated approach can help suppress the disease.