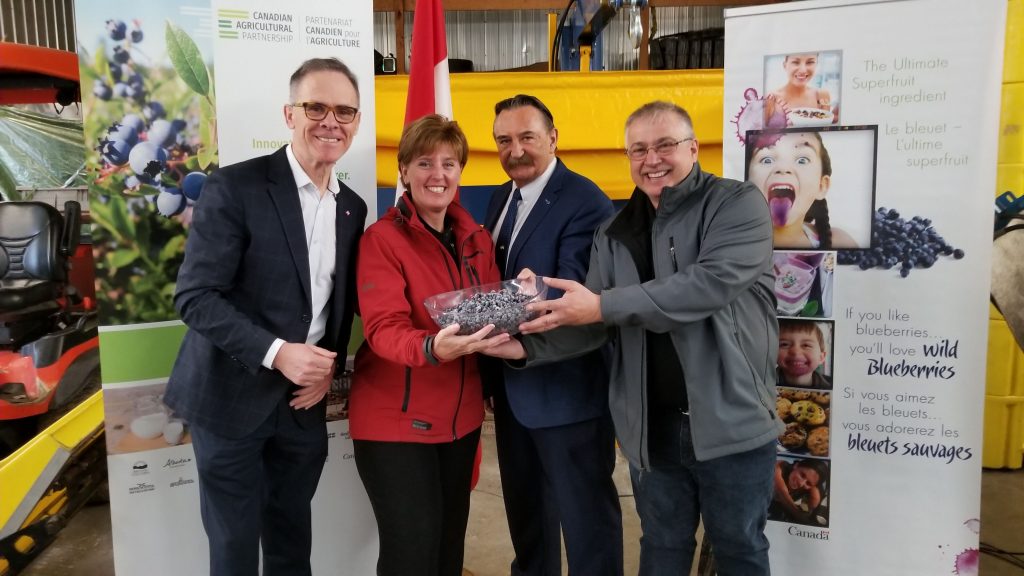 Marie-Claude Bibeau, Minister of Agriculture and Agri-Food and Pat Finnigan, Member of Parliament for Miramichi – Grand Lake recently announced over $1.6 million to the Canadian Division of the Wild Blueberry Association of North America (WBANA Canada) to market and promote Canadian wild blueberries internationally.

The funding will help WBANA Canada increase demand for wild blueberries through the development and implementation of international marketing and promotion strategies in key markets. Promotional activities will include social media campaigns, health and baking seminars, as well as Canada branding campaigns that will focus on the taste, safety and health benefits of frozen berries and processed products.

“With their sweet rich taste and incredible health benefits, Canadian wild blueberries are a crop with enormous potential. This investment is helping WBANA Canada showcase to existing and new markets around the world their delicious and nutritious products, while growing their sector and contributing to the government’s goal of $75 billion in agri-food exports by 2025,” said Minister Bibeau.

Canada is the world’s largest producer and exporter of wild blueberries, with exports worth an estimated $239 million reaching over 30 countries.

“WBANA Canada members, producers and processors, are very fortunate to have federal programs like the AgriMarketing program in place to assist them in expanding their industry by helping to create more demand for Canadian wild blueberries,” said Neri Vautour‎, executive director, WBANA (Canada). Founded in 1981, WBANA Canada is a national, not-for-profit sector organization representing approximately 2,500 growers and four major processors from Eastern Canada and is focused on promoting the use and consumption of Canadian wild blueberries internationally.

This funding of $1.6 million was provided under the AgriMarketing Program of the Canadian Agricultural Partnership.