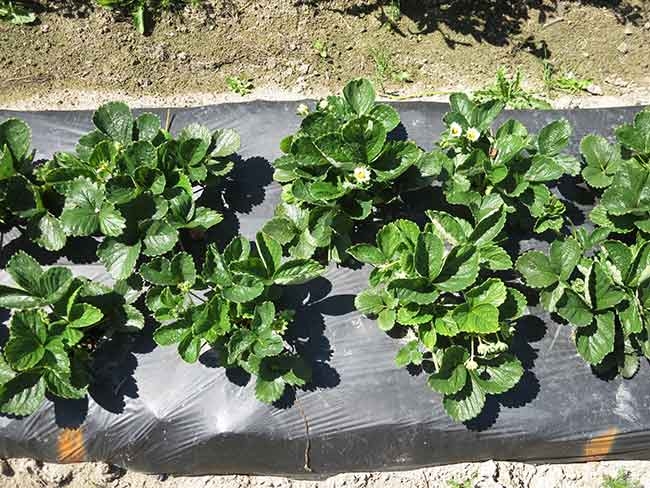 Using mulch to improve strawberry and raspberry crop maintenance and plant vigour is nothing new to berry growers. What is, however, is the growth in development and use of biodegradable mulches in berry fields.

A trial of five mulch treatments took place in Mount Vernon, Wash., during the 2014 day-neutral strawberry growing season while a non-scientific study was conducted by raspberry grower Randy Honcoop of Lynden, Wash. The findings of both tests were certainly not conclusive and more research is needed, but there are definitely more than just hints and nudges that biodegradable mulch use could be beneficial to berry crops.

Lisa Wasko DeVetter of Washington State University (WSU) in Mount Vernon spoke about the Mount Vernon trial at the recent 2016 Pacific Agriculture Show in Abbotsford, B.C. She noted that traditional mulches present a significant plastic waste issue in the U.S., and this issue is likely similar in Canada. The objectives of her study were to identify if biodegradable mulches are suitable for day-neutral strawberries and see if these mulches have any issues with chemical migration.

Chemical migration is a potential issue because mulches do not currently require the same handling procedures as other food contact materials. If chemicals can leach from the biodegradable materials into the soil or onto the plants, this presents a potential risk.

“There are questions as to whether biodegradable mulches have the potential for chemical migration,” Wasko DeVetter said. “They are not currently treated as a food contact substance.”

“My thought was it would create a greenhouse and it did,” Wasko DeVetter said of the mulch’s impact on early results she witnessed in the study.

As expected, yields were comparable for all mulched crops with the un-mulched crop yield being lower. However, there were some other differentiators at this early stage of study.

She added that the third product – the cellulose based paper-like material – may need different installation practices to be most effective. It is important to note that while biodegradable mulches are approved for organic growing in the U.S., the standards imposed are so rigid only one product meets them.

“The paper-based product blew off multiple times,” she said.

In her summary, Wasko DeVetter noted: “We need more research to understand how this can be applied.”

In another Washington field, Honcoop explored with a trial of biodegradable mulches in his raspberry fields to create a better environment for his tissue culture plug planting.

“I wondered: ‘How can I develop a system that is feasible, manageable for me to use these tissue culture plugs?’” he said during his presentation.

He had two basic criteria at the start of the installation. Honcoop wanted to avoid using black plastic and he needed something to control the weeds that would impede the growth of the tissue cultures.

“I did not want to place polyethylene sheeting in my raspberry field because it does not go away unless you remove it,” Honcoop said.

He ordered 4,000-foot long and 36-inch wide rolls of film from Organix Solutions, a company dedicated to eliminating waste to landfills. It was late May when the process of installation began.

“I was really late in the game,” he said, “but I really wanted to give this a try.”

Through experimentation with equipment, he developed a tool to punch through the plastic while planting the tissue culture plugs. The beds were created at about five inches above grade with 18 to 20-inch wide tops. Drip tape was installed under the film.

“The plants seemed to establish very well. There was minimal shock,” he said. “The moisture control is fantastic. With the film on there, I think I probably used a third of the amount of water.”

The control row he planted with tissue culture plugs has a lot of weeds, prompting Honcoop to determine the film “did a fantastic job on weed control.”

Given the process of installation, wind did not affect the film, which was snugged under the soil at the edges.

While yields are obviously not available yet from Honcoop’s trial, he felt there was more growth on the cultures in the mulched rows than in the non-mulched control row.

“I think there might be a future for this in our industry,” he added.