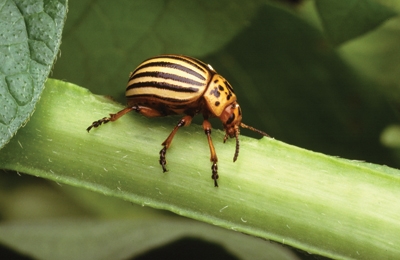 Using GM potatoes could eliminate the need for Colorado potato beetle (above) and most green peach aphid (below) insecticide applications.

“We have the highest yielding potatoes in the world,” says the president of Agriculture Development Group Inc. “The cost of production is low as compared to other vegetables. The product is nutritious and affordable and cosmetically, it is nearly perfect.”

On the other hand, he notes, “affordability” has been achieved by forcing the lowest possible cost of production and massive consolidation throughout the entire industry chain. Because growers are only earning about six cents a pound and pest tolerance is near zero, many are forced to rely on pesticides – and specifically on the cheapest, most effective pesticides – rather than having the luxury of going to an effective integrated pest management (IPM) program.

“I am not being critical of the significant efforts of potato pest management research, extension and other providers of IPM,” Schreiber says. “There is very good and significant work being done in virtually all of the big and medium potato growing provinces and states. My point is that market forces do not allow the growers sufficient latitude to do much more than select the most cost-effective pesticide. As a result of this we have, for the most part in most regions, only rudimentary IPM programs. Our IPM programs are not comparable to tree fruit, cotton, berry or vegetable IPM programs.”

Schreiber quotes University of Idaho entomologist Juan Alvarez as saying that grower manuals, such as the PNW (Pacific Northwest) Insect Management Handbook, are “just telling growers how to use insecticides.

“The late blight management program in the PNW is largely based on telling growers on what schedule to spray
fungicides,” Schreiber says. “Yes, there is a lot to the disease IPM program; but what is communicated to growers is spray intervals and what type of products to use. I know because we use the program on potatoes at on our farm.”

Schreiber suggests there are a number of insecticides that could significantly advance IPM programs – products such as Fulfill, Beleaf, Coragen, Rimon, Success, Radiant, Avuant – but, “at six cents a pound, most growers cannot afford to use them,” he says.

“Growers have to use the cheapest products, which often means pyrethroid insecticides or other products that are the least IPM-friendly. The use of cheap insecticides forces a trade-off: cheap and very effective versus the flaring of mites and aphids, which necessitate more pesticide applications.”

And, he added, potato IPM programs out there are facing challenges, such as the growth of herbicide-resistant weeds, bedding plants bringing diseases into new areas, or the arrival of new pests, such as potato tuber worm, beet leafhopper, new alternarias, phytoplasmas and thrips.

He notes that for growers who rely overly on neonicotinoids, the loss of options such as Monitor, Furadan, Temik, endosulfan, Guthion, and Di-Syston will only make this worse.

“Resistance to neonicotinoids is somewhere between inevitable and already here,” he says.

“There are elements of society that consider the use of pesticides, particularly conventional pesticides, as not good. Non-governmental organizations representing these elements exert pressure on the end users. Buyers are responsive to these elements that reflect this trend in society. I understand the politics of reducing pesticide use, which is what some vocal elements of society want. But, if you want a socially responsible pesticide policy, then maybe we should discuss reducing pesticide risk instead of pesticide use.”

Schreiber believes there should be a lot more research and development funds earmarked for potato IPM.

“R&D investment should be doubled,” he says. “It is my belief there is less potato IPM (research and development) funding than for other commodities of comparable size. I do not see the same kind of leadership in potatoes as I see in other crops, such as vegetables, cotton, tree fruit, corn or soybeans.”

Schreiber suggests the adoption of genetically modified Newleaf potatoes would cut insecticide use in half and red-
uce health risks. “In my research with this technology in the ’90s, the adoption of this technology would have resulted in an 80 per cent reduction in use of insecticides in the PNW,” he says. “It would eliminate the needs for Colorado potato beetle and most green peach aphid applications. This represents more than half of insecticide use on potatoes in North America.”

He also called for allowing the use of Defender and other pest-resistant varieties.

“Allowing only a limited number of accepted disease-susceptible varieties for french fries sentences growers to a fungicide treadmill,” he comments. “By preventing access to pest-resistant varieties, growers are being denied one of the most cost-effective and important components to IPM programs.”

And a couple more pennies a pound would also help, he adds. ❦