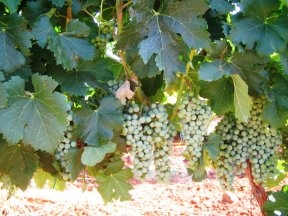 September 28, 2016, Lawrence, KS – A greenhouse experiment featured in the most recent issue of the journal Weed Technology shows that herbicide spray drift from the 2,4-D and dicamba can severely damage wine grapes planted near agronomic crops.

As glyphosate-resistant broadleaf weeds like Palmer amaranth and horseweed have emerged in corn, soybean and other crops, 2,4-D and dicamba are being increasingly used to treat weeds that escape control. Grape growers and other specialty crop farmers have become concerned that increased use of 2,4-D and dicamba will result in crop losses from spray drift.

To determine whether their concerns are warranted, researchers from Ohio State University conducted greenhouse experiments to simulate the impact of 2,4-D, dicamba and glyphosate spray drift on five economically important wine grape cultivars. Plants were evaluated at one week, 42 days and 357 days after treatment.

Researchers found that 2,4-D and dicamba treatments, both with and without glyphosate, caused significant injuries to test plants.

“We determined that spray drift from 2,4-D and dicamba can severely injure each of the five grape varieties in our study, with those injuries increasing with greater exposure,” says Mohsen Mohseni-Moghadam of Ohio State University, lead researcher for the study. “Simulated drift from glyphosate alone, though, produced only slight vine injury.”