Features Production Research
Ethylene: Why peppers do not mature after picking 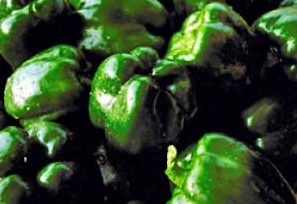 August 3, 2012 – The plant hormone ethylene lets green tomatoes ripen even after the harvest, whereas the closely related chili peppers show no such effect. Researchers from the Max-Planck-Institute of Molecular Plant Physiology wanted to understand the reason for that and compared gene expression levels and metabolic pathways of both plant species. Understanding the ripening process is important to minimize the amount of food that festers on the way from the producer to the consumer.

Tomato breeders scored a coup several years ago when they identified tomatoes with a genetic defect that made the fruits mature very slowly, even under the influence of the phytohormone ethylene. Traders and growers were delighted as it gave them more time to transport the crop, initially still green, from where it was harvested to where it would be sold. At the stores, the tomatoes could then be treated with ethylene to bring them to maturity. Other fruits, like peppers, grapes and strawberries, generally do not mature after picking; they need to be harvested when ripe and consumed as soon as possible. Scientists from the Max Planck Institute of Molecular Plant Physiology in Potsdam investigated why ethylene causes some plants to mature after picking and has absolutely no effect on others.

In order to make it easier to compare the metabolism and the gene expression level of climacteric and non-climacteric plants, the scientists concentrated their work on two closely related species: the climacteric tomato and the non-climacteric habanero chilli pepper, both of the nightshade family. The team studied the plant metabolism at different times of day, before and after the so-called breaker point, the day on which the fruit begins ripening, as evidenced by a visible change of colour.

What happens with tomatoes is that – on this very day – they release huge quantities of ethylene, experiencing what is known as “ethylene shock.” The gaseous phytohormone ethylene activates its own synthesis as soon as the plant comes into external contact with ethylene. That is why green bananas turn yellow quicker when they are stored next to apples, as apples represent an excellent source of ethylene.

Two enzymes are instrumental in the synthesis of ethylene. These are called ACC synthase and ACC oxidase. During the ripening process, climacteric tomato fruits produce much more of these enzymes, which causes ethylene levels to rise continuously. The ethylene then sets a cascade of signals in motion in the tomatoes, causing the fruits to ripen. Green chloroplasts convert to colourful chromoplasts, the hard cell wall components break down, sugars are formed and the nutrient content changes

Chili peppers do not show any reaction to heightened ethylene concentrations

“It looks like the ethylene has absolutely no influence on the gene expression or the metabolism of habenero chilli peppers,” says group leader Alisdair Fernie, who studied the fruits’ metabolism and gene activity with his team.

“The genes for breaking down the plant cell wall or the carotenoid biosynthesis during the plant’s normal process of ripening were produced in greater quantities in the tomatoes and peppers alike,” explains Fernie.