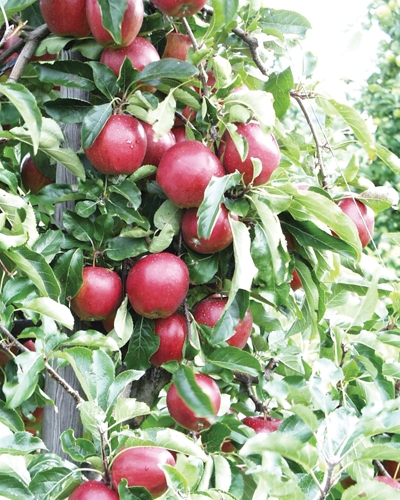 Apples of the variety Elise can be consumed safely by most people with a mild apple allergy.

This is the outcome of research performed by Wageningen UR (University & Research Centre) and the University Medical Centre Groningen (UMCG) in the framework of the
European ISAFRUIT project.

In taste and storability Elise complements Santana, previously the only apple variety marketed as low-allergenic, being suitable for most individuals with a mild apple allergy. The combination of Santana and Elise in a supply chain of growers, traders and retailers could make low-allergenic apples available from October to June.

Two to four per cent of northwestern European citizens suffer from apple allergy. These allergies are caused by proteins in the apple that, while harmless in themselves, can lead to itchiness and irritation to the mouth, lips, tongue, throat, nose and eyes.  People allergic to apple are often allergic to other types of fruit as well, thus limiting fruit intake and a well-balanced diet.

In the Netherlands, Santana has been marketed since 2006 as suitable for most individuals with a mild apple allergy. Santana apples are harvested, stored, transported and packaged in a controlled manner in order to ensure consumers trust their identity. Packaging includes an information leaflet giving test instructions in the case of first consumption. Approximately 50 to 75 per cent of individuals with mild apple allergies can consume Santana without unpleasant allergic reactions.

Unfortunately, Santana apples are only available from October until mid-January, as they are not suitable for long storage, and although the flavour of Santana is valued by most, people allergic to apple still have only one taste to choose from.

This choice can now be broadened with the variety Elise. Elise is a sweet and firm apple that, according to the experts, has a full aroma. In addition, Elise apples keep well and, as a result, Dutch-grown apples of this variety are sold until June.

Consequently, a good supply chain approach could ensure availability of low-allergenic apples from October to June.

This year, availability of Elise will still be limited, as Elise, being a relatively new variety, is grown on limited acreage.

Although the apples of Elise are easily recognizable by their full bright-red blush, for people allergic to apple, it is important to consume fruit only from controlled chains to prevent them consuming the wrong type.

It has not yet been clarified whether all apple-allergics who can consume Santana can automatically also safely consume Elise. It is therefore important to use caution when first consuming Elise, thus requiring an instruction leaflet like that for Santana.