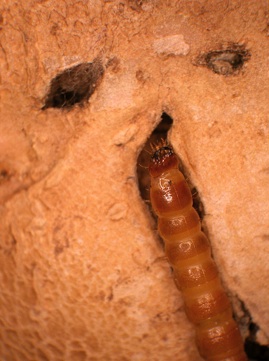 Developing potatoes to fight wireworms
When wireworms feast on potatoes, the results aren’t pretty. For the past few years, USDA scientists and their colleagues have sought a solution in the form of spuds with genetic resistance to the worms, with special attention focused on two wild potatoes from Chile and Bolivia.


September 22, 2011,
Aberdeen, ID – When wireworms feast on potatoes, the results aren’t pretty: The
spuds’ surfaces are left punctured, pitted and unappealing. For the past few
years, U.S.
Department of Agriculture (USDA) scientists and their colleagues
have sought a solution in the form of spuds with genetic resistance to the
worms, with special attention focused on two wild potatoes from Chile and
Bolivia: Solanum berthaultii and S. etuberosum.

Previous studies showed
that the wild potatoes resisted Colorado potato beetles and green peach aphids,
two very different pests. Given this broadspread resistance, the researchers
decided to see how the spuds fared against wireworms, which are the click
beetle's larval stage.

To do this, the
researchers crossed germplasm derived from the wild potatoes with a cultivated
variety, and then selected 15 top-performing plants from three generations of
progeny. Their next step was to plant the progeny lines, called “breeding
clones,” in wireworm-infested field plots and compare the damage they sustained
with that seen in flanking rows of Russet Burbank potatoes – some treated with
insecticide and some that hadn’t been treated.

The results showed that
the resistant clones fared just as well, and in some cases better than, the
insecticide-treated Russet Burbank potatoes. The research has been accepted for
publication in the Journal of
Economic Entomology.

Growers now use
organophosphate- and carbamate-based insecticides against wireworms, notes Rich Novy,
a plant geneticist with the Agricultural
Research Service (ARS) Small Grains
and Potato Germplasm Research Unit in Aberdeen, Idaho. However, the
continued registration of some of these insecticides is uncertain. Also, the
chemicals don't always eliminate the slender, brownish-orange pests, which can
survive beneath the soil for as long as five years before emerging as adults.

The researchers suspect
natural compounds called glycoalkaloids may be protecting the breeding clones.
Fortunately, the total glycoalkaloid concentrations in many of the resistant
clones are well below levels deemed harmful to consumers.

Read more
about this research in the September 2011 issue of Agricultural Research
magazine.