A University of Guelph researcher is breeding Ontario peaches with better colour, taste, texture and available in stores two weeks earlier than other local peaches.

Timing is everything – even in peaches. Ontario peaches with better colour, taste, texture and available in stores two weeks earlier than other local peaches is the goal of University of Guelph research. For Canadian growers, early maturing peach varieties can help them compete with U.S. growers.

Tender fruit breeder Jayasankar Subramanian, who works out of the University of Guelph’s Vineland Campus, has been developing new peach and plum varieties to appeal to both consumers and growers.

Canada is the northernmost latitude where peaches are grown, and even Guelph, Ont. is considered too cold compared to the Niagara region where Subramanian conducts his breeding work.

“You cannot simply bring peaches from the U.S. and put them down here and expect them to be successful,” Subramanian explains.

The goal of his breeding work is to get better peaches that are ready for harvest sooner. The peaches would be better equipped to withstand the cooler Canadian climate and extend Canada’s already short peach season, which averages around six to six and a half weeks.

Older peach varieties from two decades ago mature near the end of July, but Subramanian’s work is producing varieties that can mature as soon as July 18 – an almost two week difference.

His aim is to create an early fruiting variety that would hit the market at the same time as imported peaches, allowing Canadian consumers to support local farmers for the whole peach season.

His aim is to create an early fruiting variety that would hit the market at the same time as imported peaches, allowing Canadian consumers to support local farmers for the whole peach season.

“Before the peach season picks up in the U.S., if we could get something that is locally available that would definitely help the farmers as well as the consumers.

“Peach is a great fruit once it’s tasted locally. Once you store it and ship it, it loses most of its punch,” he explains.

Subramanian developed a peach variety called Veeblush that is bigger, redder, and tasty, but also matures quickly. It was made available to orchards five years ago and is already in high demand among Niagara peach growers.

He explains demand has been “going like crazy” because it’s one of the very successful early peach varieties. There aren’t exact numbers, but Subramanian estimates 15,000 Veeblush trees have been planted within the past two to three years in the Niagara region.

“[It’s] the one thing I’m most proud of, I have developed varieties that will be grown by the growers for the next 20 to 30 years,” Subramanian says.

Veeblush matures by July 25, and there are two more early-fruiting varieties in the pipeline, and as many as six new Ontario peach varieties by 2025.

Two “selections” (a variety that hasn’t been officially released) were scheduled for 2020 but delayed due to the COVID-19 pandemic. Subramanian expects the two new selections to be available in 2021 and 2022, and they mature earlier than Veeblush by five days and eight days respectively. These new varieties can mature as early as July 18 or July 20 depending on where in the Niagara region they’re grown.

These new varieties can mature as early as July 18 or July 20 depending on where in the Niagara region they’re grown.

Not all of the new varieties in the pipeline are early maturing, but prioritize other features that are valuable.

“You can’t just make a peach that matures early . . . if it doesn’t taste good, if it doesn’t size up, then the growers are not going to grow it.

“This is a two-way street and there has to be communication from the growers and what they are looking for, what they want, so we can develop it,” Subramanian explains.

“This is a two-way street and there has to be communication from the growers and what they are looking for, what they want, so we can develop it,” Subramanian explains.

At Vineland Campus, everyone throughout the value chain is involved with the selection process: growers, breeders, nursery people, packaging stakeholders, and extension staff. There is no one to represent the consumer, but Subramanian says everyone is a consumer at the end of the day. 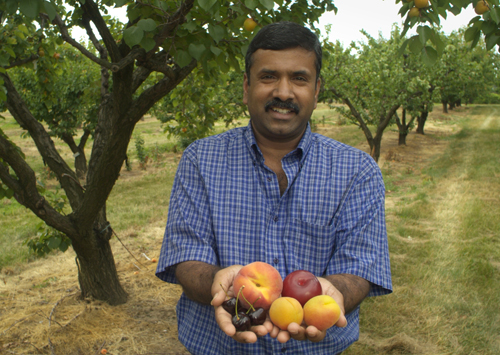 Breeding a peach variety is a long process that takes between 25 to 30 years normally. It starts with a control pollination, but the fun work happens in the field where breeders use their senses to evaluate the size, colour and taste of the peaches.

“Everyone thinks that ‘oh it’s peaches, great, you can go on eating peaches’ – it’s not like that. There are probably one or two good peaches for every 10 not-so good peaches,” Subramanian shares.

“Everyone thinks that ‘oh it’s peaches, great, you can go on eating peaches’ – it’s not like that. There are probably one or two good peaches for every 10 not-so good peaches,” Subramanian shares.

The selections with potential get grafted and propagated, and then tested for a few more years to ensure that the variety is producing consistent results.

Over the years, Subramanian has streamlined the genetic selection process to quickly determine the genes that affect peach fruit development. His refined molecular breeding process reduces the time needed to perfect fruit, from 25-30 years down to 10 or 12.

Streamlining is key because there are approximately 30,000 genes within the peach genome and Subramanian investigates more than 350 peach types.

By using a technique called a genome-wide association study (GWAS) he can zero in on the peach traits he and fruit producers want and develop a new hybrid using a fast hybridization process.

Traditional plant breeding meant raising seedlings into mature fruiting trees to find the breeds with the best-looking and tasting fruits that produce fruit earliest. Subramanian can simply run what’s called a polymerase chain reaction (PCR) on a leaf from each seedling, a process that amplifies a small sample of DNA into an amount large enough to be studied in detail. From the PCR, he can identify the small handful of plants carrying the early fruiting gene along with other desirable taste and colour traits.

By raising these plants only, the genetic selection process is reduced from the 10 years it takes to raise a fruiting tree to the few months it takes a seed to become a seedling.

“This saves producers a lot of time and space,” Subramanian says. “If you were to plant and raise 5,000 peach trees, you would need 20 acres and 10-plus years, whereas the hand-selected group of seedlings would likely only require one row, and you could be sure they all have the traits you want.”

Molecular breeding means researchers can also determine which peach varieties will be most resistant to certain diseases.

Subramanian’s next project is to reduce the spread of black knot disease, the most devastating fungal disease affecting plum varieties. The disease favours Japanese and European plums, but also attacks, to some extent, sour cherries.

“It’s like a cancer. Unlike other fungal diseases or bacterial diseases which take a short time to develop and show up in the plant, [black knot] takes a year, or sometimes up to two years, before it manifests and shows up in the tree,” Subramanian explains. “And by the time it shows up it’s too late.”

The cure for black knot doesn’t exist. Growers have to cut down the branches and let a tree “clean itself” and grow back. Even then, it’s not guaranteed to be fully free of disease. The difficult nature of the disease in the field and in the lab means that not many scientists choose to work with it, and only a handful of scientists have worked on black knot in the past.

By sequencing RNA – the molecule responsible for regulating and expressing genes – Subramanian looks for disease resistance markers, or sequences in the RNA that correlate to lower susceptibility to diseases like black knot. Eventually he hopes to breed plum varieties that are resistant to black knot.

By sequencing RNA – the molecule responsible for regulating and expressing genes – Subramanian looks for disease resistance markers, or sequences in the RNA that correlate to lower susceptibility to diseases like black knot.

Because the only solution so far is to cut down branches, income drops drastically during the recovery stages and Subramanian wants to eliminate that problem altogether for growers.

“By identifying small mutations that have a huge impact, we can get closer to perfecting Ontario peaches,” he says.

Aside from his recent work with peaches and plums, Subramanian has been working for almost 34 years with fruit. He completed postdoctoral research in grapes and a PhD in mangoes at the University of Florida, and before that was working on mangoes and citrus fruit at the Tamil Nadu Agricultural University in Coimbatore, India.

He says if he could work on one other fruit it would be apples and to use his breeding techniques to develop a variety that is resistant to fire blight. Within an apple orchard, apple trees infected with fire blight look like they have burnt, dead branches.

“But I don’t think I’ll be able to get to it. I’m not young anymore so it’s a long process,” Subramanian says jokingly.

Subramanian research is done in collaboration with researchers at the Vineland Research and Innovation Centre. Funding is provided by the Ontario Tender Fruit Producers Marketing Board, the Niagara Peninsula Fruit and Vegetable Growers’ Association, the Ontario Ministry of Agriculture, Food and Rural Affairs (OMAFRA) and the Innovation Superclusters Initiative.

With files from The University of Guelph