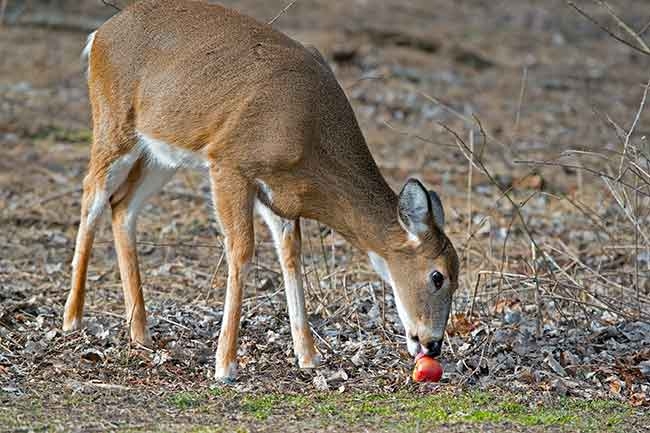 Before putting up fencing, Ben Hindmarsh, environmental specialist with the Ontario Ministry of Agriculture, Food and Rural Affairs, advises you be sure deer are the problem and that the losses are quantified. Photo: Dreamstime

The trick to determining who or what is damaging your crops lies in being able to differentiate between damage caused by deer or damage caused by other wildlife, says Ben Hindmarsh, environmental specialist with the Ontario Ministry of Agriculture, Food and Rural Affairs (OMAFRA).

Deer tend to eat grains as long as they can but when the snow gets to six inches deep, they will change their food source to the available flora.

“It’s initially hard for their digestive systems to make the switch from grains to vegetation, such as cedar trees, but after that they are fine,” says Hindmarsh.

There are home remedies that can help deter deer from trespassing into fields. A suet or mesh bag can be used to hold heavily scented soap, or wads of fabric softener sheets. Human hair, attained from the local barbershop, can be used as well. Deer also avoid the smell of rotten eggs. The scent deterrents should be suspended from trees, posts or fencing or wherever deer can catch the scent.

Scent deterrents also come in commercial remedies, such as ammonium soaps or sprays containing thiram. Taste deterrents are also available, such as capsaicin, which is the active component in chili peppers, or blood or bone meal, which can be spread to deter deer, rabbits and rodents.

There are some audio and visual deterrents that vary in effectiveness, such as suspending pie plates, mylar ribbons or scary-eye balloons. Propane air cannons can be quite effective, as are frightening devices such as sprinkler systems triggered by motion sensors.

Auditory, scent and visual deterrents must be cycled regularly to avoid becoming “white noise” that the deer ignore.

Hindmarsh says one other popular deer deterrent available to farmers is recreational hunting, which is free and generally available from October to December.

Deer removal is another firearms option and involves shooting out of season. For this, there are many application criteria accompanied by site assessments and visits. There are also seasonal restrictions, he says. Similar paperwork is required for harassing deer with rubber bullets.

Dogs can also be used to harass deer and keep them out of orchards. Hindmarsh says some producers use a buried or “invisible” fence to keep the dogs on site and to intimidate and chase away deer.

The fencing option is up to 100 per cent effective but with it comes some operational considerations, construction and maintenance costs. Poly fence, for example, is the cheapest option and is easy to work with. Posts can be set at 20 feet apart and the fence pinned to guide wires at two and seven feet. At the high end of the cost spectrum is the eight-foot wire fence with cedar posts at 16 feet, says Hindmarsh.

He adds to warrant the cost of any fencing, one has to conduct a damage estimation in the orchard in the spring.

“Sample three to five per cent of the orchard at random. Pick three representative one-inch branches off each tree. Count the damaged buds and divide by the total number of buds, then multiply by 100 to estimate the damage.”

Hindmarsh says this estimate will help you decide whether you should lay out the money for fencing and tell you how many years it will take to recoup your investment.

To do this, he uses the example of a 50-acre field surrounded by 1,650 by 1,320 feet of fence. If this fence were 7.5-foot poly with cedar posts every 20-feet, he estimates it would cost $1.87 per foot for materials. If the fence were eight-foot woven wire with posts every 16-feet, he estimates $2.43 per foot for materials. If eight-foot tensile steel fence with pressure-treated posts at 16-feet, he figures the cost at $6 per foot, including installation by a contractor. All include one gate at $600.

“Compare the capital investment of fencing with your losses, then you’ll have your answer,” he concludes.