Features Production
Decades of potatoes from processing to seed

A Delta, B.C., family rooted to their land focused on the processing and fresh potato industry before growing certified seed potatoes 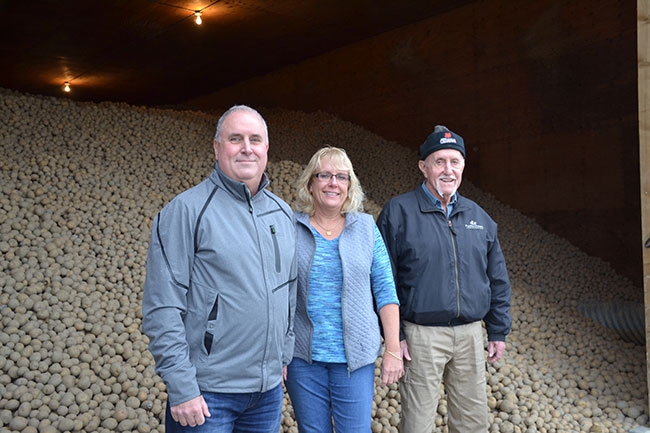 (Left to right) Trevor Harris, his sister, Val Fair, and their father, Jim Harris, stands by a full storage of seed potatoes at Pacific Potatoes. They represent the fifth and sixth generation of the family to operate the Delta, B.C., farm. Photo by Ronda Payne

There are now seven generations of farmers in Delta, B.C. behind (and in front of) Pacific Potato Corp., and while the potato was always a dietary staple, it wasn’t until recent generations that it became this family’s mainstay.

The Harris’s, who farm on a section of land in Delta known as Crescent Island, descend from David Harris, who came to Ontario in 1870, but the lineage goes back even further. David and wife, Sarah’s, son John James Harris settled in Delta where John married Francis (Fanny) Burr, granddaughter of William Henry Burr, who began farming in the region in 1820.

In a letter in the family Bible, David describes his family as being “well-to-do farmers.”

Burr emigrated from Ireland – the contested home of the mass-produced tuber – and snapped up 867 acres of land south of the Fraser River, starting a family tradition of farming. Throughout the generations, the has land changed hands by inheritance and by sale with cousins still farming together, according to Trevor Harris, the sixth generation and co-owner/head of operations at Grove Crest Farms and Pacific Potato.

Trevor’s daughter, Melissa, plus his sister and co-owner Val Fair’s sons, Spencer and Lucas, will make up the seventh generation if they choose continue in their parents’ footsteps.

“We’re partners,” Trevor says of Val, who runs the sales side of the business. The duo bought their dad, Jim, and mom, Merillee, out in around 2002, but 79-year-old Jim is still up on what happens around the business. After all, he was the one who decided to go into potatoes in a big way.

Like the Crescent slough, the story is long and winding. Crescent Island had been dairy farms for many years, Jim explains.

“Every single one. From this road right here to the river,” he says. “When I was young, we grew three acres of potatoes.”

At that time, cows were fed potatoes as part of their forage. It was a hearty root vegetable for the family and, if there were any leftover, they would be marketed. The dairy farm became a pea farm when there were a few processors in the area but as that dropped off, production was gradually converted fully to potatoes.

Together with his cousin, Ron Harris, Jim established H & H Farms, which grew Kennebecs for the processing market in the mid-1970s when a plant was built in the region.

“We grew processing and fresh market potatoes then and then we upped our acreage a bit,” Jim says. “Maybe 100 acres in total.”

When processing left the region, the family turned to growing fresh-market potatoes, which led to growing seed potatoes in the mid-1980s when Jim started Pacific Potato, thanks to the input of a helpful federal food inspector.

“The federal inspector said, ‘You know Jim, you’re growing actual seed quality, you should register for it,’ so we listened to him,” he says. “Basically, we didn’t have to change anything because the seed we were buying was good quality enough to grow seeds.”

But, the switch wasn’t easy.

One of the first types of seed sold by Pacific Potato was Russet Burbank, which Jim says required travel all over the Columbia Basin in the U.S.

“We went down, knocked on doors and started peddling seed,” Trevor recalls. “At the time we switched to seed, the fresh market wasn’t doing very well. It’s rebounded now, but it’s specialty [potatoes].”

Money was hard to come by in the russets and other processing potatoes that had prices locked down by large processors. Jim made another switch.

“The first one we switched to was Yukon Gold table stock,” he says. “Then, we went to specialties like white potatoes, yellow potatoes and red potatoes. The difference is [seed potatoes] are inspected and tested [to be virus and disease free], which fresh market aren’t.”

The Harris’s have about 1,000 acres in their rotation and crop about 600 acres per season. In order to keep the land rotation happening, they work much the way their ancestors did – together with their neighbours.

“We trade with our neighbours for crop rotation,” Trevor says. “Mainly corn for silage for their cows. We rotate in peas and beans for processing. We plant potatoes back every third year. We’re a seed potato farm; it’s more critical to keep things disease-free.”

The family also plants barley and daikon radish as a cover crop, which they plow under.

Of the five main farmers on Crescent Island, only two aren’t descendants of the Burr’s or Harris’s, but the principles of being good to neighbours is no different to this clan when it comes to land trading.

Except for potatoes that size out and go to the fresh market, Pacific Potato only grows seed potatoes. They obtain Elite 2 seed from Pemberton, B.C., which they grow to Elite 3, then sell to commercial fresh market potato growers.

“If we want to start a new variety, it takes three to four years,” Trevor explains.

The changes in the farm’s practices have continued because, like in every sector in agriculture, the advancements are constant.

“The average that was used for the industry [decades past] was 12 tonne,” Jim adds.

The increases have come from the continuous improvements, according to Trevor.

(Left to right) Trevor Harris, his sister, Val Fair, and their father, Jim Harris, stands by a full storage of seed potatoes at Pacific Potatoes. They represent the fifth and sixth generation of the family to operate the Delta, B.C., farm.

“Our seeds, our new varieties. It’s management and seed varieties and new technology,” he says. “I’ve been planting with GPS guided tractors for years. The list goes on and on.”

“Every aspect of the operation has been improved,” Jim confirms.

Pacific Potato has slowed down the speed of planting, going from a rate of four miles per hour to two to allow for more accurate planting.

“In 2016, we grew 18 varieties. In 2017, we narrowed it down to 12 because of breeder’s rights. New varieties are coming out of Europe so we have to get on the bandwagon, which we have,” Trevor says. “I’d say 39 per cent are yellows, reds are probably 43 per cent and the whites and russets are about 18 per cent. Yellows are probably trending higher. They yield better, look better, taste better and they market better too.”

In 2004, Pacific Potato added organic seed potatoes to their lineup, which Jim notes can be a tricky prospect for seed potatoes.

Trevor says when the farm is in production, they spray a fungicide once a week as a preventative measure on the conventional crop and for the aphids in the organic potatoes they use mineral oils.

About 80 per cent of the seed potato crop from Pacific Potato goes to the U.S. grower market and finding the right varieties for that market are key, but Trevor notes the BC Fresh campaign has helped boost the demand for local potatoes.

One of the new varieties Pacific Potato is bringing to market is the high disease and bruising-resistant Merida. This high-yielding, early, yellow potato has shallow eyes and won’t discolour when boiled. Pacific Potato will be the only seed potato grower in North America to offer this short oval shaped, uniform tuber that looks similar to the Yukon Gold (which Pacific Potato continues to grow). It’s the perfect addition for the Harris’s heavy clay soil, which produces a smooth, shiny skin and taste that appeals to the fresh market.

Trevor continues to work closely with the Canadian Food Inspection Agency to ensure potatoes grown on the farm meet the specified standards to be certified as seed. It’s a long process from tissue culture to fresh-market potatoes, but not nearly as long as the Harris family roots have grown in Delta soil.