The Ecological Farmers Association of Ontario’s Farmer-led Research Program has united many Ontario growers to cultivate their curiosity, help them test their ideas and make informed decisions. 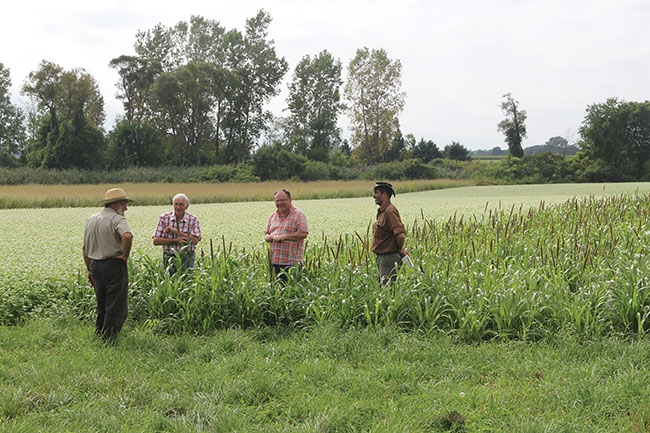 The Farmer-led Research Program kicked off in 2016 and is the only program of its kind in Canada.

As Ontario farmers Brent Preston and wife Gillian Flies lugged their heavy tarps out during each new planting season, they pondered ground cover options for their farm at Creemore. The tarps were working well but would lighter weight ground cover fabric do the same job with less expense and less hassle?

Contemplating an outlay of as much as $10,000 for new tarps, the couple turned to the Farmer-led Research Program to search for some answers. Started by the Ecological Farmers Association of Ontario (EFAO) in 2016, the unique program lets farmers do the nuts-and-bolts research and then share it. EFAO is a membership-based organization dedicated to supporting farmers to build resilient ecological farms and grow a strong knowledge-sharing community, and farmer-led research is one way it does this.

“You can actually see the results clearly in the field,” says Preston, citing the rigorous research involved on the couple’s acreage at the New Farm. “It was an incredible learning experience.”

That’s the kind of outcome Sarah Hargreaves, research director at the EAFO, wants to see.

“The farmers are the ones who choose the trials that are selected for funding,” she says of the program that connects farmers, and lends technical and financial support. “It’s farmers who are coming up with the research ideas and we have few restrictions. The only restrictions are around whether it is moving our knowledge forward in the realm of ecological agriculture.”

Sample research
The conclusions about subjects like efficient ground cover and reduced soil disturbance have been valuable, Hargreaves says.

“Last year, Brent and Gillian’s no-till vegetable trial was very exciting. They grow organic salad greens and relied on tillage for weed control so they wanted to test using a silage tarp to minimize tillage. After harvesting a succession of greens, they laid silage tarps without tilling. After two weeks, they removed the tarps, tine weeded if necessary and then direct seeded. They also had control plots, where they tilled as per usual right beside for each succession, and did this comparison multiple times throughout the season”

The results were impressive. “What they were able to see is a huge difference in crop health. The salad greens in the no-till plots were ready a week before the other salad greens, which was unexpected,” Hargreaves says. “We think it had to do with soil moisture and leaving the ground undisturbed, but we didn’t test this specifically. They also saw a reduction in labour for spinach and lettuce because the crops grew so fast there was no weed pressure.”

The farmer-led no-till research documented an 82 per cent reduction in tillage, which was huge, and Hargreaves says that got members excited. The next question was, can landscape fabric do the same thing as silage tarps?

“There are some technical issues with the silage tarp. Burying the edges is the main issue [for farmers], and also the durability and the weight – lugging these huge tarps around. The landscape fabric can be pinned, it’s lighter and it’s anecdotally more durable.”

This year three farms are doing follow-up research, testing landscape fabric against the tarp and the regular tillage routine.

The start
The Farmer-led Research Program kicked off in 2016 and is the only program of its kind in Canada, according to Hargreaves. She became interested in the approach after seeing a similar program when she lived in Iowa. The Canadian program is modeled after the Practical Farmers of Iowa’s Cooperators’ Program, which has promoted farmer-led research for the past 35 years.

Hargreaves saw her Canadian program begin with nine farmer-researchers doing 11 different trials. By 2017 and 2018, 37 different farmers received funding to conduct 30 varied trials. Currently, the program supports over 20 trials, some of which are being done by farmers previously in the program. She affectionately calls those farmers “repeat offenders,” and enjoys seeing their continued enthusiasm.

“What we’re finding is that the interest and the enthusiasm among EFAO members is growing, as well as within the general agricultural community, around the importance of farmer-led research,” Hargreaves says.

With the emphasis on working with nature and observing soil health and the fluctuations in climate, the program turns farmers into citizen scientists. Once approved for funding, participating farmers get a $500 farmer fee stipend, which is just a small token.

“We also then reimburse for approved research expenses, which would cover crop seed or stakes that you need, or soil tests,” Hargreaves says. “That’s something that the Iowa program doesn’t do. And we like multi-year trials because it adds that second year of data under different weather conditions.”

The Farmer-led Research Program kicked off in 2016 and is the only program of its kind in Canada.

Protocols
Once a project is chosen, Hargreaves helps the farmer design a rigorous protocol. That protocol is posted online and made public so anyone can see it, and, if successful, repeat it. Then she and the farmer do check-ins and field days throughout the year. At the end of the growing season, they submit their data.

“I do all the analysis and write it up, with them helping me interpret the data to turn it into a formal research report that’s posted online so the knowledge generated from these trials is all open access,” she adds.

For produce growers, the idea is to map the experimental area, account for variation like changes in topography, take good measurements and keep accurate records. Plots must be comparable and factor in cultivation activities.

“The process must be rigorous enough to get reliable data,” Preston emphasizes, adding that there must be enough randomization of plots so the measured outcomes show no predictability or bias. True data is better than mere over-the-fence anecdotal evidence, according to the farmers involved in the research.

Hargreaves says that she’s aware when working with farmers that they have real lives and very busy schedules. Her job is to pave a path between getting enough data and letting the farmers get their work done. After all, one of the program goals is financial profitability.

As Hargreaves compiles data and furnishes analysis, she is often in uncharted territory.

“Sometimes the results don’t really tell the farmers what they wanted or maybe the experiment didn’t go exactly as planned. But what we’re finding, which is exciting and very positive, is that overwhelmingly the farmers feel that just the process of being involved in farmer-led research is so helpful.”

Complement to academia
Working four days a week as the research director, Hargreaves takes her job seriously as she also works on her own family’s farm, which produces pasture-raised livestock and chickens. Her co-researcher, Heather Coffey, is a vegetable grower from eastern Ontario. The two immerse in various projects, seeing farmer-led research as a necessary complement to academic research and experimental field stations. At any given time, both Hargreaves and Coffey are out in the province, touring with farmers, seeking new crop ideas, better soil health and entrepreneurial marketing trends.

“Right now, we’re working on a trial that will support eight growers to test different lettuce varieties for fall harvest. In a single year, they’re all working together,” Hargreaves says. “We also have a lot of trials that are set up as one year studies and then they want to continue their observations over the next few years. They may not have seen a result, but they feel like maybe it has a longer term impact, so they’re still really committed to tracking changes.”

Growing excitement
Currently, farmers are experimenting with red pepper varieties, sweet potato breeding, winter hardy garden peas and seedless cucumbers, among others. And by adding program-related presentations and symposiums, this allows the farmers to gather together and share even further.

“Having nearly 70 people in the room for the Farmer-led Research Symposium in London in 2018 was really exciting, because it wasn’t just those involved in the program. It was a lot of new faces and there was so much excitement and buzz around the research,” Hargreaves says. “Farmer-researchers did poster presentations to present their results. I think that’s probably my proudest moment. Everyone’s in a room geeking out on research.”

Bringing a variety of backgrounds to the farm table, the Farmer-led Research Program has united many Ontario growers to cultivate their curiosity, help them test their ideas and make informed decision.

Hargreaves sums it up, “Farmer-led research is on working farms, in a real environment, where a farmer sees a need to change to benefit the soil, for example, and make a living, both of which are really important.”