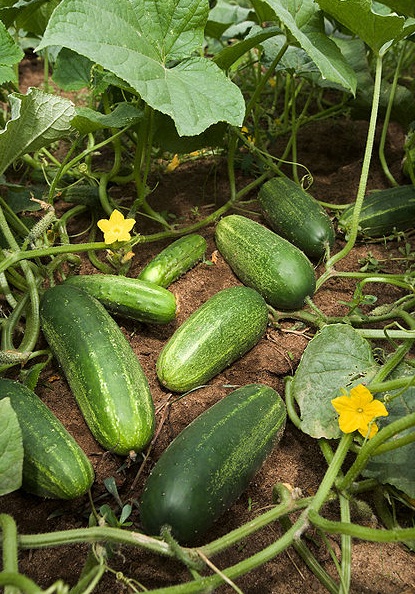 November 4, 2009 – The
genome of the cucumber has been sequenced by an international consortium lead
by Chinese and U.S. institutions.

November 4, 2009 – The
genome of the cucumber has been sequenced by an international consortium lead
by Chinese and U.S. institutions.

The annotated genome has
been published online by the journal Nature Genetics.

The cucumber genome will
give insight into the genetics of the whole cucurbit family, which includes
pumpkins and squash, melon and watermelon, and be a platform for research in
plant biology, said William Lucas, professor and chair of the Department of
Plant Biology at the University of California, Davis. Lucas helped with the
development and management of the project.

“This is going to help a
large community – we can now go 10 times faster than we could before,” he said.

Lucas studies the vascular
transport systems, phloem and xylem, that plants use to move nutrients,
minerals and signaling molecules throughout the body of the plant. Pumpkins and
cucumber are model plants for studying vascular transport, because their
vascular system is large and easy to access.

The Lucas research group
has shown that plants use both proteins and RNA – molecules copied or
transcribed from DNA – as signaling molecules that are transported around the
plant through the phloem. These signals can affect plant growth, coordinate
activity through the plant and help it fight infection. For example, in 2007
they showed that florigen, the signal that tells the growing tips of plants to
make flowers in response to seasonal changes, is a protein transmitted through
the phloem.

The new study identified
800 phloem proteins in the cucumber genome. With the help of the genome data,
researchers will be able to rapidly identify and characterize all the protein,
RNA and other molecules in the phloem sap, Lucas said.

There are already
indications that far more is going on in the phloem than anybody, “including
me,” had previously expected, he said.

The study shows that five
of the seven chromosomes in cucumber arose from ten ancestral chromosomes
shared with melon, and gene-coding stretches of DNA share about 95 per cent
similarity to melon. Preliminary studies in the Lucas lab at UC Davis have
established comparable similarity between cucumber and pumpkin.

The cucumber genome will
also provide insights into traits such as disease and pest-resistance, the
fresh green odor of the fruit, bitter flavours and sex expression.

The cucumber is the
seventh plant to have its genome sequence published, following the well-studied
model plant Arabidopsis thaliana, the poplar tree, grapevine, papaya, and the
crops rice and sorghum.

The sequencing effort,
begun earlier this year, was coordinated by Professor Sanwen Huang of the
Chinese Academy of Agricultural Science and included the Genome Center at the
Beijing Genome Institute-Shenzhen and UC Davis as well as several laboratories
in China and others in the U.S., Denmark, the Netherlands, Australia and South
Korea.

Part of the effort relied
on new methods developed by the Beijing Genome Institute to assemble short
pieces of DNA, about 50 base pairs, into the sequence. The Beijing Genome
Institute-Shenzhen can now sequence and assemble genomes much faster, and at
lower cost, than previously possible, Lucas said.

“This will be the
forerunner for many genomes done at a cost-effective rate,” he said.