One of Canada’s leading distributors of fresh fruits and vegetables celebrates its centenary with the planet’s biggest fruit salad. 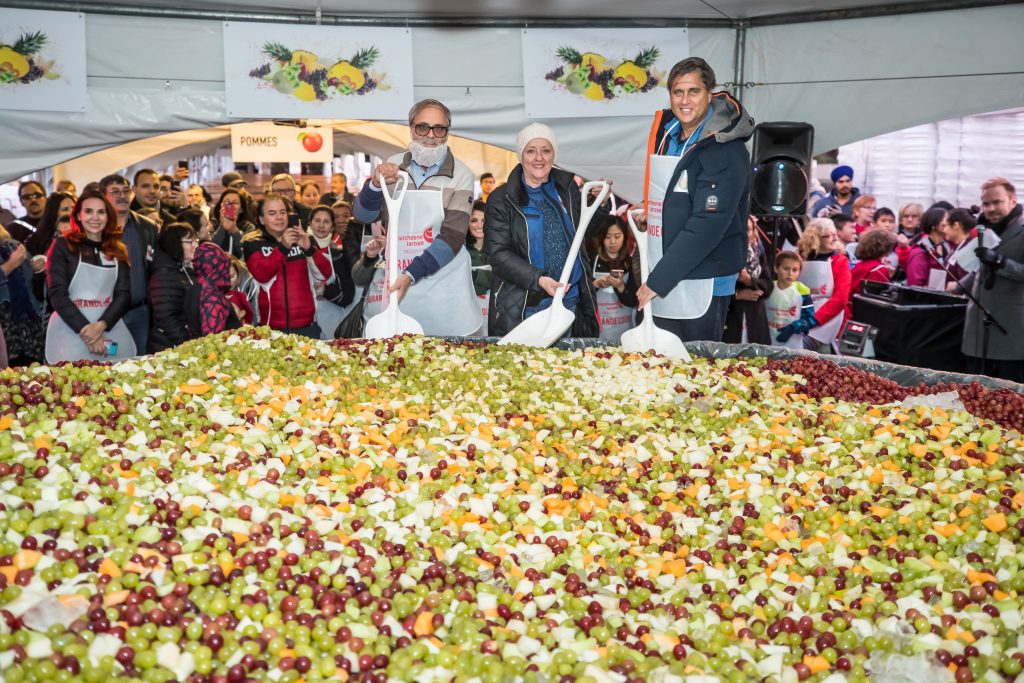 Courchesne Larose, one of the country’s leading distributors of fresh fruits and vegetables, set an unconventional world record as more than 600 participants gathered to assemble the largest fruit salad ever seen on the planet.

Weighing a total of 10,160 kilograms (22,400 pounds), the record-setting concoction, expected to be ratified by Guinness World Records in the coming months, was the crowning touch of the centennial celebrations of the company, which has been established in Montréal’s east end since 1918.

The event, dubbed “La Grande Coupe” and held at the Esplanade Sun Life Financial outside Olympic Stadium as part of First Fridays, brought together a host of Courchesne Larose partners and employees. For three hours, participants peeled and sliced fruit, faithfully following a recipe developed especially for the occasion by Québec pastry chef Patrice Demers.

“We extend warmest thanks to all our employees, suppliers and partners, without whom this one-of-a-kind event would not have been possible,” said Courchesne Larose president Alain Routhier. He continued, “A hundred years, for a family-run business, is exceptional, and we wanted to do something big to celebrate the occasion. We couldn’t have asked for better support from those who helped achieve this world record. At Courchesne Larose, teamwork has been key to our proud tradition of success since 1918, and teamwork is what allowed us to achieve this ambitious goal today!”

The entire process unfolded under the watchful eyes of a team of independent third-party auditors. The final data will be transmitted to the organization responsible for ratifying Guinness World Records, with approval expected by 2018 year-end.

Distribution for a good cause
After the gigantic fruit salad was completed, it was divided up and distributed to community groups serving Montréal’s neediest citizens, via the Moisson Montréal network and the Tablée des Chefsfood-recovery program.

“It was important to us that this event have a community dimension, because giving back to society has been part of our company’s DNA since the very beginning, for example through our efforts on behalf of Louis-Charles Routhier Foundation,” said Michel Routhier of Courchesne Larose.