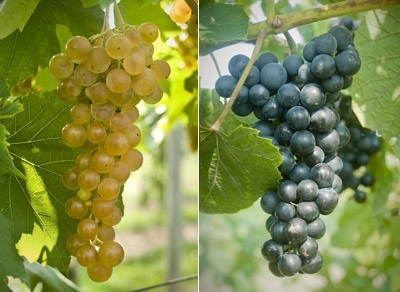 February 12, 2013, Ithaca, NY – After a novel naming challenge drew more than 1,000 suggestions from around the world, a Cornell University breeder has revealed the secret identities of two new wine grapes: Arandell and Aromella.

Bruce Reisch, professor of horticulture in the College of Agriculture and Life Sciences, introduced the grapes at Viticulture 2013 in Rochester, N.Y., Feb. 7.

Arandell – a mash-up of “arandano,” the Spanish word for blueberry, and the “ell” from Cornell – is the first grape released from The New York State Agricultural Experiment Station’s no-spray vineyard.

Reisch hopes its hint of blueberry will attract wine lovers, while its superior resistance to downy and powdery mildews will appeal to growers interested in more sustainable practices. The name was suggested by Michael Fleischhauer, a retired computer analyst and wine enthusiast from Juneau, Alaska.

Aromella, an aromatic, muscat white wine grape, was named by Michael Borboa, a Californian winemaker and songwriter who used a lyric exercise he uses for writing songs. Aromella ranks high for winter hardiness and productivity. Reisch says its release is timely given the growing popularity of muscat wines.

The project emerged almost accidentally when Anna Katharine Mansfield, assistant professor of enology, suggested emailing colleagues to introduce two varieties ripe for naming. As news of their appeal spread through the proverbial grapevine, it attracted coverage from outlets including NPR’s Morning Edition and Bon Appétit online.

“At one point, messages were popping up in my inbox every five to 15 seconds,” Reisch said. “People proposed names but many also shared stories.”

Family tributes were a popular theme. One person suggested a grape be named for his wine-loving mother-in-law; another thought they should be named after his lively twin sons.

“One thoughtful person asked if I had a grape named for me, suggesting Breischling,” Reisch said.

But grape naming is serious business. With 7,000 plus existing varieties on the market, new grapes face an uphill battle.

“You want something unique but it has to be marketable, reasonably easy to pronounce and conjure positive connotations,” Reisch said. Names that sound foreign or similar to existing varieties are often popular, he added.

“The trickiest part is ensuring the name isn’t trademarked or already used in the industry,” said Mansfield.

Once the list was pruned to 120, Reisch researched each name then gathered opinions on 19 finalists from growers and winemakers.

They admit it was hard crossing off personal favorites. Many submissions had Cornell associations, like Big Red (Cornell’s mascot), A.D. White (Cornell’s first president) and Llenroc (Cornell spelled backwards). Others, like Genevieve, were inspired by the grapes’ birthplace in Geneva, N.Y.

Reisch hopes winemakers will now experiment with the grapes just as people did with their naming. Double A Vineyards in Fredonia, N.Y., and Grafted Grapevine Nursery in Clifton Springs, N.Y., have vines of Arandell and Aromella available for sale.