The University of Guelph’s Simcoe Research Station’s Providence is a new red-fleshed apple for the cider and processing industry. 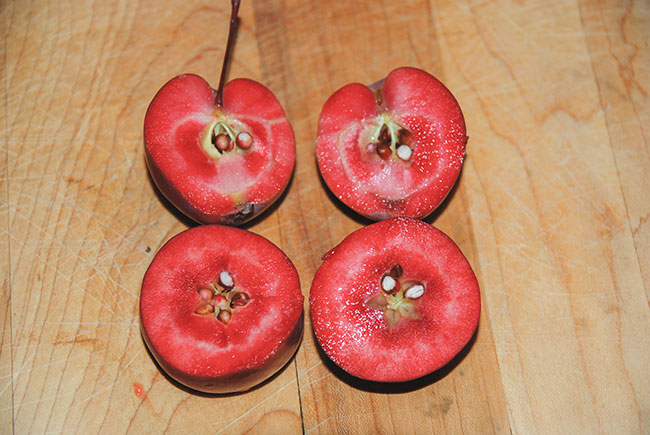 Cross-section of Providence showing the red mesocarp and red seeds. All photos courtesy of J.A. Cline.

A new apple cultivar developed by the University of Guelph is set to paint the cider and processing industries red.

The new apple cultivar, “Providence,” has very red flesh, which produces crimson-coloured juice for cider, jams and jellies. It was tested as “B17Crab7” for nearly 20 years and has several unique features well-suited for the apple cider and processing industries.

Origin
Providence was bred and developed by John A. Cline, professor of pomology and tree fruit physiology with the University of Guelph, at the Simcoe Research Station in southwestern Ontario. It originated from an open-pollinated cross conducted in 2000, with the Empire apple as female parent. Seeds from the offspring were germinated and the seedlings were transplanted to an orchard in 2002.

One selection, numbered “B17Crab7,” was selected for its fruit qualities and propagated onto clonal M.26 rootstock for further evaluation. Trees were then planted in 2007 in replicated and randomized fashion of two trees per plot with other crab apple selections, as well as the reference cultivars for further evaluation. Several trees have been grafted on dwarfing rootstock and, as of 2015, are in production at the Simcoe Research Station.

Providence has been grown for over 10 years, providing consistent results. The tree is consistent in size and growth habit, and the fruit has been consistent in size, shape, flavour and colour characteristics annually. No variants or off-types were observed during the cultivar’s development.

Tree
The tree is relatively vigorous, with a spreading growth habit. It typically flowers in mid-May in Simcoe, Ont., with prolific deep pink blossoms. Early in development, spur leaves are red in colour, which later – along with extension leaves – change to green with red veins and petiols. The bark of younger shoots also has red colouring.

Trees have yielded up to 100 kilograms of fruit per tree from 11-year-old trees on M.26 rootstock. Crop load ranged from 16 to 32 fruits per centimetre squared of trunk cross-sectional area. 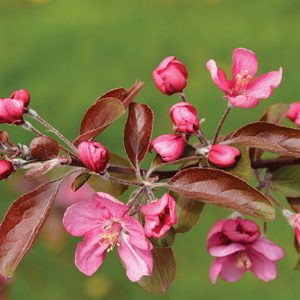 Close-up of flowers, showing the red colour of spur leaves and developing extension leaves, and the shoot apex. 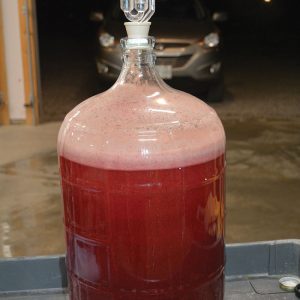 Freshly pressed juice from Providence in a 20-litre carboy, ready for fermentation into cider. Juice retains its crimson colour when fermented alone as a single varietal.

Fruit
The Providence apple is unique for its distinct red-purple skin, ovoid shape and red flesh. Fruit are plum-shaped, have long pedicels, and range in size from 20 to 43 grams when trees are not thinned. Each spur regularly sets two or four fruits, which mature in late August to early September in Simcoe. Providence is cold-hardy to at least zone 6a, having survived at the Simcoe Research Station for well over 15 years without any notable winter injury. (Crab apples are generally considered very winter hardy.)

In Simcoe, Providence has been grown in a conventionally managed orchard with no notable pest and disease susceptibilities. However, resistances to fire blight, apple scab, woolly apple aphid or powdery mildew are unknown, as they have yet to be evaluated.

The fruit produces a distinct crimson red juice, which maintains this colour when fermented. Extracted juice is high in acidity, has a Brix percentage of around 12 per cent, is high in polyphenols, has an astringent and bitter flavour, and good colour stability following fermentation. The juice is classified as a “bittersharp” using the Long-Ashton Research Station cider classification system.

Potential development
Providence has several potential uses. The most obvious is for producing red-fleshed juice with high acidity and tannins for the cider industry. Craft cider makers in Ontario who have created test-batches with Providence have reacted positively.

The variety has also been used experimentally to create non-alcoholic juice products for the beverage industry. It also makes an excellent tangy, crabapple jelly with bright, clear colour. As well, the fruit is a rich source of antioxidants (flavonoids, flavanols, and anthocyanins).

Canadian Plant Breeders Rights were applied for in the summer of 2020. The University of Guelph, owner of the Providence cultivar, is currently negotiating licenses with nurseries showing interest.

Interested in Providence? Contact Rattan Gill, manager of technology transfer in the University of Guelph’s Research Innovation Office, at (519) 824-4120, ext. 58878, or at rattang@uoguelph.ca.