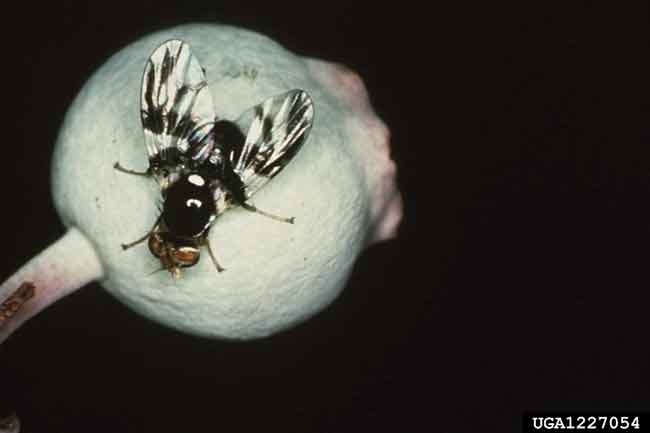 Both China and South Korea have zero tolerance for blueberry maggot. If any are found, the export program will be suspended. Photo courtesy of Jerry A. Payne, Invasive.org

It is taking a lot longer than expected to get B.C. blueberries into China and South Korea but B.C. Blueberry Council (BCBC) executive director Debbie Etsell continues to push their potential as export markets.

“China is a growing market for blueberries,” she told growers at the recent Pacific Agriculture Show held in Abbotsford, B.C., pointing out Chilean blueberry exports to China have increased from just 200 tonnes in 2012 to 4,000 tonnes last year.

After almost a decade of effort by BCBC, China and South Korea finally signed memorandums of understanding (MOUs) covering fresh blueberry imports last September. However, protocols are still being finalized and, to date, just two small shipments of fresh berries have actually made it to China.

Etsell says the efforts the council has put into developing the Chinese fresh market are well worth it. With a population of 1.4 billion people, it has massive potential and B.C. already has a built-in advantage over many of its competitors.

“China already knows Vancouver. That’s a marketing advantage we don’t have to work on,” says Etsell.

South Korea also offers potential. It has limited local food production so must look to imports to sate its growing appetite.

“Koreans eat a lot of fruit and love smoothies.”

“Since 2010, there has been over 100 per cent growth in our Korean market and it now surpasses Japan,” he says.

However, Japan is still the largest fresh market, taking more than half of U.S. fresh blueberry exports.

Growers and packers needed to apply to the CFIA before mid-February to be considered for an export certificate this year. They must then sign a compliance agreement and register both the packing plant and the field(s) their berries come from with CFIA on an annual basis.

Packing houses need to be GAP-certified, have such pest exclusion devices as insect screens or automatic doors in place, provide product traceability from field to package, handle approved fruit separately, use forced air cooling and test for spotted wing drosophila (SWD). Packing lines can include automated equipment but must also have trained hand sorting to ensure all contaminants are removed. There must be a dedicated work area for CFIA inspectors who will watch the shipments being wrapped.

Growers must hire third-party IPM consultants and maintain complete pesticide and monitoring records. Early season IPM must be completed by the first week of May.

B.C. Ministry of Agriculture (BCMA) berry specialist Carolyn Teasdale says the IPM consultant needs to provide field maps and monitor for all pests of concern, including SWD, mummyberry, cherry and cranberry fruit worm, rhagoletis, leaf rollers (South Korea) and fruit rot (China). There is a two per cent limit on mummyberry and a five per cent limit on leafrollers. Monitors also need to look for blueberry maggots.

Since the two countries have zero tolerance for blueberry maggot, the program will be suspended “if we find any,” Peterson stressed.

The IPM consultant must monitor fields weekly from pink tip to the end of the harvest and need to inspect at least one to two plants per acre, with a minimum of 12 plants per field.

First found in B.C. blueberry fields five years ago, cherry fruitworms have now spread throughout the Fraser Valley. BCMA entomologist Tracy Hueppelsheuser told growers to set at least one trap per 20 acres, and start searching for eggs as soon as they trap at least six moths. That was the case in 10 of the 28 fields the BCMA monitored for cherry fruit worm last year.

Teasdale says cranberry fruit worm has become a major pest in other blueberry growing areas but has only been found in a few cranberry fields in B.C.

Even though China and South Korea may impose onerous conditions, Payne says growers and packers have “no choice” but to look east for their markets to avoid a confrontation with the wild blueberry sector, which exports most of its berries to Europe.

“If we try to displace them in Europe, they will compete with us in North America and Asia and we can’t afford to lose any of our market,” he says. “We have a billion pounds of blueberries to move.”