As planting decreases level off and growers look to the future, are club varieties the answer to expanding a marketplace some might already consider saturated? 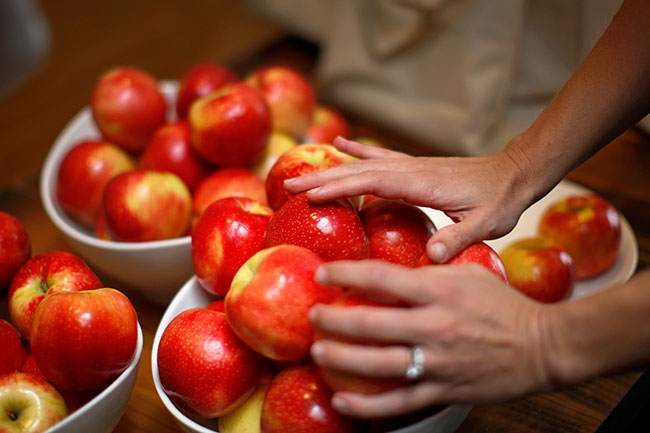 Scotian Gold secured the rights to grow and market SweeTango in all of Canada. Photo courtesy of SweeTango

A representative of Enza Fruit Products, the U.S. subsidiary of New Zealand-based Enza/T&G Global, recently shared with B.C. fruit growers his views on club varieties and how they are influencing the market.

The quality control and packing manager for Enza’s Washington state operations, Chris Willet explained that Washington growers have lots experience with club varieties. Indeed, the top nine of the United States’ leading 15 growers are from Washington.

“That accounts for 50,000 acres of apples and pears,” Willet pointed out. “Of those nine in Washington, seven are actively working with at least one club variety and often have more planned within the system.”

“That’s about 2.2 million cartons for 2015 with a goal of five million by 2020 and beyond that in five years,” Willet said. “We have 60 acre growers, who are considered niche growers in Washington. And vertically integrated partners who have 5,000 acres of apple production alone.”

What is the attraction? In an industry that is essentially flat, the consumer interest and the grower returns that have come with Ambrosia and Honeycrisp are tempting. But there is a point at which any market can become saturated. Indeed, B.C. growers voted to support a continued marketing levy for Ambrosia in 2016. The need to find markets for what is likely to be double the current crop is of paramount concern.

“The club program is a go-to market strategy that is profitable (in theory) for everyone in the chain from the breeder, the variety manager, the grower, the packer and the marketing company,” Willet said.

Managing the volume of a new variety in the market place will “drive better value for the orchard, by selling fruit at a better price,” he added.

But there is more to it than just keeping the supply below the demand. Growers need a good product and need to grow and pack that product to a high standard plus find markets.

“One of the things I really like about my job is that Enza is always looking for the next variety whether it is five, 10 or 15 years from now.”

And that is where a club program can provide support. Enza has the capital to develop a variety to commercial viability, something that is difficult for grower groups to do on their own.

SVC is licensed to manage Ambrosia in Canada and internationally and has launched several successful cherry varieties in the last 10 years.

And growers can be reluctant to take on the risk.

“You have a variety that seems good in development but you have to grow it on a farm scale and find the potential flaws and have enough to bounce it over the packing line and then get a marketing program started,” Kappel said.

New York state growers have worked with Cornell University and produced two New York exclusive apple varieties, RubyFrost and SnapDragon. Kappel said that would be possible in B.C., on a smaller scale.

“I would love it if they would come to us and say they want a club variety for B.C., or other parts of Canada, or for a major Canada-wide retailer,” he said.

Members of the Nova Scotia cooperative, Scotian Gold, were the first to embrace the club concept in Canada. They are part of the international group that grows and markets the University of Minnesota bred SweeTango.

Scotian Gold CEO David Parrish explains that it came out of N.S. growers working with Honeycrisp.

“Our guys in 1996 were probably some of the first to plant Honeycrisp,” Parrish said. “As that crop came on in the early 2000s, Dennis Courtier from Pepin Heights Orchard in Minnesota was doing a good job of marketing them.

“We began selling our Honeycrisp to Dennis when his were finished. Dennis had been talking to the University of Minnesota about this new apple that was going to be even better than Honeycrisp and the university wanted to know if Dennis was interested.”

Scotian Gold secured the rights to grow and market SweeTango in all of Canada.

A cooperative was formed and growers in Washington, Minnesota, Michigan, Wisconsin, New York, Nova Scotia and one in Quebec, secured the rights to grow and market SweeTango in their respective territories (for Scotian Gold that includes all of Canada).

The cooperative they formed to drive the SweeTango program was called “The Next Big Thing” (NBT). It purchased the rights from University of Minnesota and then growers paid NBT, Parrish explained.

“We paid for our allotment of bushels that we wanted to market and royalties are charged every year on the boxes that are sold.”

Those royalties are used to fund the NBT coop and allow for funds to be reinvested in new varieties.

“There was a set volume that was planted, we wanted to make sure we didn’t over produce it as a group,” Parrish said. “We have given more allotment out to be planted in the next couple of years, but that has already been done.”

There are also strict quality expectations for the growers.

“We are quite conscious that if the consumer is going to pay a premium it has to look like a premium. When it’s a cull, it’s a cull and it is not marketed as a SweeTango. It will go to the juice plant.”

Parrish said the field support the cooperative is able to offer is an important part of their program. They are also working with the Kentville research station to develop picking protocols for optimum storage of SweeTango, using the Italian invented DA meter.

Does it benefit growers?

“Well, it’s not Honeycrisp numbers,” Parrish said. “Honeycrisp has really written it’s own book on what the growers are getting in returns. There are certainly more costs to run a program like SweeTango with the growers paying royalties.

“Nobody knows where Honeycrisp is going to go but, at a certain point, there is going to be enough volume planted that it is not going to be returning the dollars that it is now. The hope with these managed varieties is that it will be sustainable because you are only supplying what the market wants so that is benefit to the growers.”

He added, “Honeycrisp is probably one of the last open varieties that we will ever see where anyone can grow it and anybody can sell it.”

In Ontario, as the industry looks to the future, club varieties might also be taking on an expanded role.

“The cost of production plus a reasonable profit in the apple business has been a challenge and that is always a concern of mine,” said Brian Gilroy, former chair of the Ontario Apple Growers.

He noted that in Ontario, like B.C., planted apple acreage has shrunk significantly but appears to have leveled off.

“As people look to expand and grow the industry, club varieties are certainly something that people are interested in looking at,” he said.