Farmers will be the first to feel
the heat from global warming as they grapple with new and aggressive
crop pests, summer heat stress and other sobering challenges that could
strain family farms to the limit, 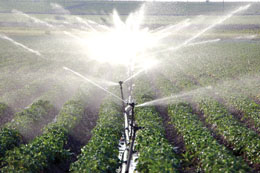 Farmers will be the first to feel the heat from global warming as they grapple with new and aggressive crop pests, summer heat stress and other sobering challenges that could strain family farms to the limit, warns David Wolfe, a Cornell University expert on the effects of climate change on agriculture.

His gloomy assessment was part of a report by the Northeast Climate Impacts Assessment (NECIA) Synthesis Team, presented this past summer at a press conference at the New York Botanical Garden.

Choices made today could have profound impacts on tomorrow’s agriculture and natural landscapes, he said.

In simultaneous press conferences in seven northeastern cities, the team of independent experts, in collaboration with the Union of Concerned Scientists, presented analyses of the impact of climate change on key sectors in the northeastern United States. By providing the best available science on the issue, they hope to persuade opinion leaders, policy-makers and the public to make informed choices about climate-change mitigation and adaptation.

“Today’s energy and emissions choices lead to starkly different pictures of what the future holds for our farms … in terms of climate change impacts” said Wolfe, a professor of horticulture at Cornell and lead author of the NECIA agriculture chapter.

While a warmer climate will trigger a longer growing season and the opportunity to experiment with new crops, “it will also open the door to invasion by new and aggressive crop pests, damaging summer heat stress and serious challenges with water management,” said Wolfe. “Adapting to change will add economic stress to family farms already stretched to the limit.”

The Northeast can also expect more frequent summer heat waves that could compromise the health of crops, livestock and humans, said Wolfe. What will happen in the future, he said, depends “on whether we as a society follow the business as usual (higher) emissions scenario or begin taking action now to reduce greenhouse gas emissions.”

The apple industry could be threatened as winters become so warm that the “winter chilling” period required for maximum flowering and yield is no longer met, he said.

“With a lower emissions scenario, apple and other affected tree fruit crop industries would have several more decades to adapt, possibly switching to different varieties or crops,” Wolfe said.

Of perhaps greatest concern in the next few decades, he stressed, is increased pressure from aggressive, invasive insect, disease and weed pests. Many of the most aggressive weeds, research shows, grow faster with more carbon dioxide in the atmosphere.

“On top of this, our study found that, at the higher emissions scenario, weed species currently constrained to southern states by our cold winter temperatures could encroach throughout the southern half of New York by mid-century,” said Wolfe.

His recommendations to farmers in-cluded plowing and tilling less to reduce the burn off of stored soil carbon that releases carbon dioxide into the atmosphere and using less nitrogen fertilizer, which produces nitrous oxide, a potent greenhouse gas.

The full reports are available at www.climatechoices.org. Wolfe’s specific study will also be published in a forthcoming issue of Mitigation and Adaptation Strategies for Global Change. ❦