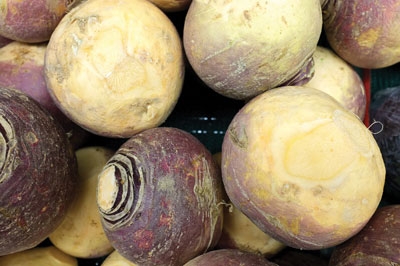 Field testing is underway on four new cultivar lines of rutabagas developed at the University of Guelph. The cultivars are being compared to the existing industry standard, Laurentian.

Rutabaga production in the Maritime provinces is taking a hit thanks to cabbage maggot.

Dr. Peggy Dixon, an entomologist with Agriculture and Agri-Food Canada based in St. John’s, N.L., is involved in research projects currently underway to control the pest. Control options include row covering, exclusion fencing or planting pest-resistant rutabaga, she said, adding that row covers used in conjunction with applications of Pyrinex (chlorpyrifos), the only pesticide registered for brassica crops.

The adult cabbage, which looks like a house fly, lays its eggs in the soil at the base of plants. The resulting cabbage maggot, once it hatches, feeds on the plant roots, attacking rutabaga, radishes, turnips, and in the early growing season, cabbage, broccoli and cauliflower.

“You have to control the pest through all the growing season,” said Dr. Dixon, noting it tends to be a problem in transplants and young seedlings, which die, wilt, or become stunted.

In the U.K. there are no pesticides registered for use on rutabaga, so row covers – known as Wondermesh – are used. They are also available in Canada as Protek Net, said Dr. Dixon. The European-developed polyethylene row cover is reusable, lasts about eight to 10 years and transmits light and water to the crop. Dr. Dixon said equipment is available to both apply and remove the covers. They can be cut to order, the rolls varying in size from two to 25 metres wide and 50 to 250 metres long. The covers can be anchored by pegs or sandbags filled with crushed stone.

“For a really large row covering, you can forget sandbags or pegs,” Dr. Dixon said. “Simply plough along the edge of the row covering over the edge with soil.”

Good weed control is essential before applying the covering, according to Dr. Dixon, who added that AAFC conducted a trial using the pre-emergent herbicide, Lantrel, in 2012. The efficacy of Lantrel sprayed through mesh covering depends on the stage of weed growth, species of weed and spray pressure, she said, adding the economic analysis of these trials is yet to come.

On the P.E.I. trial site, researchers did not have to use Lantrel, as the weed pressure was very low, said Dr. Dixon.

In B.C., researchers are examining pesticide-impregnated eco-fencing, which is supported in 30-foot sections with rebar. When the flies are ready to lay their eggs, they fly low, hit the fence and are trapped in the fence’s overhang. Fenced plots can be up to four hectares in size and are gated. In Newfoundland, severe winds can stretch the fencing material, causing it to droop and sag. It is also difficult to drive in stakes for the fence in stony ground.

Dr. Dixon said the eco-fence is effective at keeping out flies – it has been shown to reduce insect egg numbers by up to 80 per cent – but it is less effective when cabbage maggot populations are high.

Field testing is also underway on four new cultivar lines of rutabagas developed at the University of Guelph. The cultivars are being compared to the existing industry standard, Laurentian.

There was no cabbage maggot damage when the cultivars were treated with chlorpyrifos in New Brunswick, noted Dr. Dixon, although there may be emerging resistance issues with the pesticide. In B.C., heavy rains washed the pesticide off.