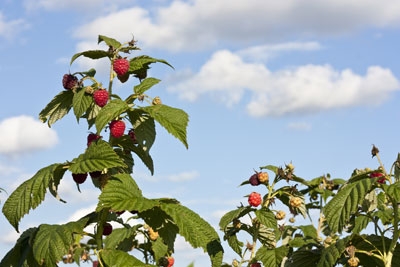 The horticultural weed scientist from Washington State University likens his job to taking “the square peg of herbicides that were developed for soybeans, corn, cotton, and wheat, and hammering it into the round hole that is berries,” he said.
“Sometimes they do fit and sometimes they don’t. There’s a lot of square pegs that we’re trying to fit and hopefully some of those will end up in that round hole as a registration.”

“What brought this to a head is we did a trial down in Vancouver, Wash., and we didn’t see a statistical response in yield,” Miller said. “Over three years, we didn’t see any of the cane-burning products statistically making a difference in yield.”

Cane burning came into fashion in raspberry production during the late 1970s and early 1980s to burn off first-year primocanes as a way of increasing yield, controlling cane blight, cleaning up the raspberry canopy, providing an opportunity for cane pruning and training plus providing some short-term weed control, he explained.

But according to Miller, much has changed in raspberry production since that time, including a shift away from growing the very vigorous cultivar Latham and the use of the herbicide dinoseb, which ceased production in the mid-1980s.

“I got the idea that maybe we want to test [this] because we are using different herbicides and we’re using different cultivars,” he said. “Let’s see whether we currently see that benefit that we used to see [with cane burning].”

The trial involved several treatments, including cane-burning products Aim or Goal alone, Aim or Goal in combination with the residual herbicide Sinbar, Sinbar alone, and an untreated check.

In 2010, the trial was based on two farm sites near Bow, Wash., involving fields of Meeker and Coho, explained Miller, adding that for the final two years of the trial, the Coho field was dropped and a planting of Cascade Bounty near Lynden, Wash., was added instead.

“We wanted to [use] this different cultivar – a fairly recently developed cultivar – and see whether we got that the same response,” he said.

The commercial-scale plots studied were at least 100 metres long and received all of the different treatments.

The second trial using the small plots examined side-by-side plantings of Meeker and Cascade Bounty. These plots were used only to examine the cane-burning product treatments of Aim or Goal alone plus an untreated check.

According to the recorded results, only one plot – the commercial-scale planting of Meeker – showed a statistical difference in yield from the different treatments, including cane burning.

“[They all] statistically increased yield, including just Sinbar alone,” said Miller. “Based on this … cane burning did pay off for us. If you’re growing Meeker, there’s probably no reason to expect a difference in the way that plant responds [to cane burning], at least up in this part of the country.”

For the Coho farm-based plot “we did not see a statistical difference in the single year,” said Miller. “Numerically, these different treatments did increase yield but, statistically, we didn’t see that response. In other words, there’s enough variability in that data that we’re unsure to say the difference was due to the herbicide treatment. Cane burning may or may not help but with Coho, we did not see a yield response.”

For the farm-based Cascade Bounty plot, no statistical difference in yield between the different treatments was observed in either year, said Miller.

“In fact given the tightness of [this data], we didn’t really see much, even a numerical difference on these,” he added.

The trend continued in the small-scale research plots. While there were numerical differences in yield between the different cane-burning treatments in both Cascade Bounty and Meeker, there was no statistical difference on either variety in any of the years and the three-year average still did not have a statistical response, said Miller.

“The three-year average of just yield between the two varieties – not taking into account cane burning at all – did show that Meeker’s average (yield) was higher than Cascade Bounty,” he said. “Cascade Bounty just didn’t yield quite as well as Meeker but in light of the herbicide we were using for cane burning, we did not see a statistical response.”

What about weed control in the different research plots examined?

“So after three years, we’ve had three cycles with these applications,” he said.

The cane-burning treatments that also included an application of Sinbar showed no statistical difference in any year and not much difference year to year.

“In other words, Sinbar has done a pretty good job of weed control,” said Miller. “If we had Sinbar in the mix, it really didn’t matter. Sinbar took care of things.”

But in the treatments that received just cane-burning products alone, a statistical response was observed that Aim and Goal were not doing as good a job at weed control as they had been when mixed with Sinbar.

“No big surprise there,” said Miller, adding that the product applications were done in April and the weed control was recorded in August. “You wouldn’t expect it to last very long and that’s exactly what we saw.”

When examined year-to-year-to-year, the results showed that weed control by the cane-burning products applied on their own went down. By 2012, Goal was providing only 18 per cent weed control.

“We had a lot of chickweed,” said Miller. “Is that a big factor on yield? It probably wouldn’t affect it too much.”
But he added that by the end of the three years, “the plots were definitely not doing as well” as they had been at the beginning of the trial.

When it came to cane pruning and training, cane burning played a significant role in the first year of treatments on Meeker, said Miller.

But in both years of treatments on Cascade Bounty, and in subsequent treatments on Meeker, no statistical difference was observed in the amount of time needed for pruning and training.

“If you’re growing Meeker, I’d say situation normal, drive on, thank you very much,” said Miller. “With Coho and Cascade Bounty, you may want to think about it. Is [cane burning] really doing what you hope it will be doing with those other cultivars, particularly the newer cultivars that may have a different growth action?”

He added that if a grower plans to do cane burning, they will have to use residual herbicide to get the weed control.
“You’d probably get by with just a year or two of just cane burning but by that third year, you’ll have really fallen off on that weed control,” he said.

“Am I saying don’t cane burn? No, I’m not saying that. What I am saying is that if you’re doing something just because you’re used to doing something with other cultivars, you might want to evaluate a row or two just to see if you do have that same response.”