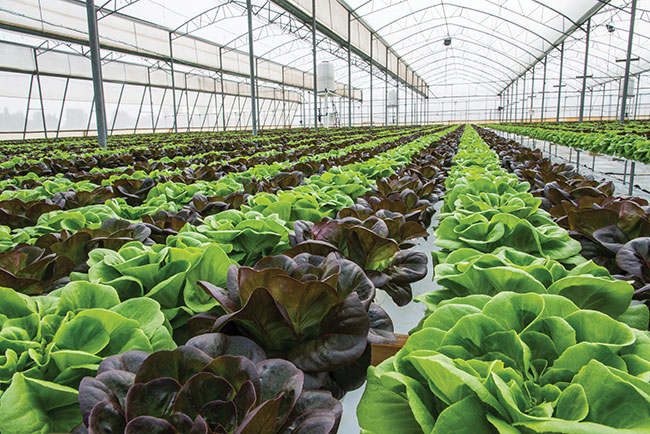 Greenhouse crops benefit from a longer growing season, which is a boon when consumer demand is growing for fresh, local produce. Photo: studiodradobe stock

The Canadian greenhouse vegetable sector is the largest and fastest growing sector of Canadian horticulture. According to Agriculture and Agri-Food Canada, Ontario accounted for 69 per cent of greenhouse growers in the country in 2020. Ontario is home to more than 3,300 acres of greenhouses, giving the province one of the highest concentrations of greenhouses in North America, and employing more than 13,000 workers. In the Organic Council of Ontario’s (OCO) preliminary findings of the Labour Needs Assessment project, 30 per cent of conventional farms and 69 per cent of organic farms in the greenhouse, nursery and floriculture sector have paid employees.

Despite these significant figures, according to the Organic Federation of Canada (OFC), only six per cent of greenhouses in Canada were certified organic as of 2019. Why do so few greenhouse growers choose to grow organic? The idea of transitioning to organic may be intimidating due to the strict requirements for certified organic greenhouses, laid out in the Canadian Organic Standards (COS).

Since 1984, Erieview Acres’ operations have involved greenhouse production. In 2006, they switched gears, exchanging rows of flowers for organic vegetables. Today, they have 12.5 acres of organic greenhouse crops, including beefsteak tomatoes, tomatoes on the vine, campari tomatoes, sweet bell peppers and mini-cucumbers.

One challenge that Norm Hansen, Erieview Acres’ director of research and development, describes is increased summer heat extremes. “We have issues with midsummer heat, but that can be mitigated with whitewashing the greenhouse and fog systems.” Whitewashing is a shading method in which a whitewash is applied to the exterior of the greenhouse, reflecting some of the sunlight to keep it from overheating.

Growing produce within a structure also reduces the need for chemical inputs like fungicides and pesticides, making it an attractive option for organics. Weeds, pests and diseases often fail to circumvent this barrier; should anything enter the structure and affect its crops, it is easier to spot and treat diseases and pests in a greenhouse than outdoors. Erieview Acres opts for occasional hand-weeding or steam-pasteurizing the soil to neutralize weed seeds, rather than herbicide use.

Many Ontario greenhouses have also begun using integrated pest management (IPM) strategies, including the release of beneficial insects, like ladybugs, within the structure as biocontrol agents to kill pests while reducing chemical usage. Unlike outdoor systems, where biocontrol agents can escape and be difficult to manage, the greenhouse provides a closed system that keeps them within the crop.

that biocontrol agents are more than just a solution to a pest problem – increasing and protecting the biodiversity of the greenhouse’s ecosystem is more important than killing a pest. Lack of diversity within an ecosystem makes it vulnerable to changes, Hansen notes. “A complex food web stays stable; that’s what we’re after in terms of our organic ecosystem.”

Each species in the greenhouse’s ecosystem is a moving part in a delicately balanced machine. Targeting a species within that food web and eliminating it could disrupt the entire ecosystem, leading potentially to crop failure. “Stop killing things,” Hansen cautions. “The moment you kill something, you create a vacuum, and the first thing into the vacuum is the bad guys.”

Erieview Acres has introduced automated agtech into their greenhouses to increase productivity. “Organic growers love their iron – and that doesn’t mean iron fertilizer, that means iron machinery,” Hansen says. One such innovation is a compost-spreading machine, which runs down the rows and spreads compost in place of more costly manual labor.

While an organic yield can be of high value, when a crop failure does occur, it’s much more costly compared to field crop failures. This is due to a greater input cost, with factors like energy and automation involved. “The rule of thumb in organics is a crop failure every five years, and we’ve certainly had less than that. Growing organics in a greenhouse can be high risk, high reward,” Hansen explains.

Looking to the future, Hansen is excited by new technologies that have begun phasing out gas in favor of electric energy, which may be overall cheaper in the future. As a member of the Ontario Greenhouse Vegetable Grower (OGVG) Energy Committee, Hansen is helping the search for a solution to the energy crisis from an organic perspective. Hansen believes that there needs to be a diverse system of solutions, whether it’s district heating, solar thermal, small nuclear, ground-source heat pumps, geothermal, or a combination of these energy sources and others.

Greenhouses could be the future of agricultural innovation in Ontario’s organic sector, providing a sustainable, reliable, and biodiverse production of organic produce. Despite the strict COS standards that protect organic integrity, transitioning to organic is becoming easier with resources like OCS research and OCO’s organic consultants. Ontario’s organic greenhouse sector is still growing and could one day be a major player in Canada’s agricultural sector as a whole.

Interested in learning more about the organic sector? Join OCO at the 2023 Guelph Organic Conference, with online sessions from Jan. 23 to 27, and in-person programming at the University of Guelph on Jan. 28 and 29.