A look at what it takes to gain traction in the marketplace with a new club fruit apple variety. 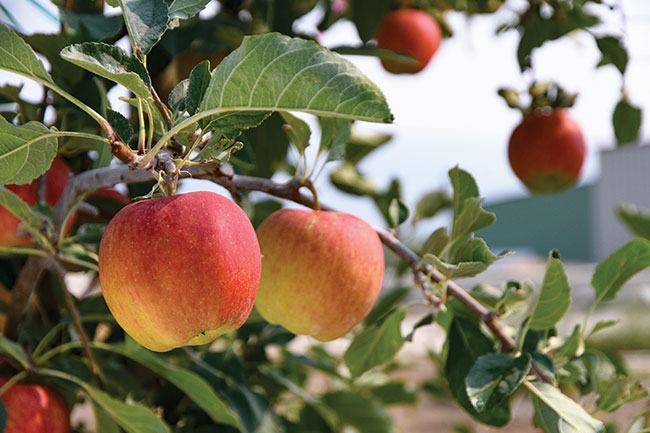 New apple varieties have been popping up for years in hopes of becoming the next Ambrosia. But, how do new varieties gain traction in the market? And, how much of their success depends on consumer preference?

Observant shoppers may have noticed a new apple variety on Canadian Costcos fruit counters. Boasting a sweet-tart flavour, high crunch, resistance to bruising, and long shelf-life, Smitten apples have many of the attributes today’s marketplace demands. Smitten apples are a redon-yellow, early-maturing, traditionally-bred apple from New Zealand’s Institute for Plant and Food Research.

“There are a lot of newcomers to the market. A lot of them have been selected because of their patent rather than because of the native superiority of eating experience. [Smitten] was chosen based on the eating experience, not because it was patentable,” says Barclay Crane, president of Pegasus Premier Fruit.

Kelly Ciceran, general manager of the Ontario Apple Growers, says that Smitten apples are so new to Canada that her organization, which represents approximately 200 orchardists, has no real experience with the variety. She’s seen varieties come and go and says that, ultimately, the consumers call the shots.

“We grow for the market. Understanding consumer insights and the taste profiles that people like is so important, because then we can tailor our apple breeding programs towards those spaces,” Ciceran says. However, success requires a lot more than just finding a variety that consumers like, she is quick to point out.

“We grow for the market. Understanding consumer insights and the taste profiles that people like is so important, because then we can tailor our apple breeding programs towards those spaces,” Ciceran says. However, success requires a lot more than just finding a variety that consumers like, she is quick to point out.

While Smitten is not a notably beautiful apple, Crane says consumers are drawn to the more “natural look” of the bicolour fruit.

Crane achieved exclusive North American production and distribution rights for Smitten in 2011. Today, he has 400 of his own acres planted to the variety in Washington State and contracts additional acres in Ontario, Quebec, Michigan and New York State. He anticipates increasing his own acreage of Smitten to 1,000 over the next two years, and adding a very limited number of additional contracted growers.

Newcastle, Ont.-based Algoma Orchards and Saint-Jean-Baptiste, Que.-based Paul Jodoin Orchards Inc. signed on as the first (and only) Canadian orchards to grow the Smitten variety.

Algoma Orchards planted 15 acres of the variety in 2017 and another 30 this past spring. Kirk Kemp, Algoma Orchards’ president, would like to plant additional acres but obtaining trees that adhere to Canada’s strict virus-free budwood requirements is a real challenge.

Kemp expects a total of 35 acres worth of budwood will be available to him for planting next spring. Of that, he’ll plant some on his own operation and distribute the rest between a small handful of orchardists he’ll recruit this winter to grow on contract.

“This winter we might have enough trees to sign up half a dozen growers. We hope to get it up to eight or 12 growers who we’re working well with so we can start to roll it out and gain consumer interest. [Pegasus Premier Fruit has] entrusted us to pick growers at the front edge of the industry who will put the time and effort into growing this fruit,” Kemp says. “Right now, we’re going to, for a number of reasons, stick to growers who already work with us. We know them; we trust their ability to grow the variety. We trust their ability to keep control of it. And, the growers we choose understand this isn’t sure thing.”

“[The growers who are already contracted to Pegasus Premier Fruits to grow Smitten] are the early adopters and we will protect them,” Crane says. “They were willing to stick their necks out before there was buzz. They are tapped into growers across the country. So, we will rely on them until we get to point where we need a bump. They are the pioneers and as we need more trees planted, they will get first refusal.”

Though he hasn’t vetoed options in other states, he says that if the existing growers can keep up, they won’t license any more vertically integrated players. Despite the small number of producers growing the fruit, Crane anticipates that there will be a million Smitten trees in the ground in North America within the next two years. And, if the public catches on, the planting to production lag time means the variety’s ramp up will be gradual.

“We got Honeycrisp in 2001. It was at least 10 years before the light was on and everyone was planting them. We’re about seven years in with Smitten. I think it’ll be at least five to 10 years before it explodes.”

“We got Honeycrisp in 2001. It was at least 10 years before the light was on and everyone was planting them. We’re about seven years in with Smitten. I think it’ll be at least five to 10 years before it explodes.”

Kemp hopes, three to four years from now, to have access to a more substantial inventory of budwood and to have the proven consumer interest to back expansion, including recruiting some B.C.-based producers.

Some Smitten acres are already being grown under organic production: Crane expects to ship 25,000 boxes of organic Smitten to retailers this year. He says organic production is, “clearly the future” both for the variety and the industry.

As Canadian-grown Smitten ramps up production over the next few years, supply will be supplemented with Washington State product when available and then backfilled with Smitten grown in the southern hemisphere. The plan is to keep grocery stores stocked 12 months of the year.

In terms of growing ease, Crane says they are working out the production challenges. But, the variety does hang well and, because it is such hard apple, packs easily.

“Every one of these varieties has challenges. I’m not going to tell you Smitten is the easiest, but we’re getting good pack outs with older blocks,” he says.

The variety’s primary challenge is that it tends towards a small fruit size when not managed exactly right. Kemp recommends planting a little tight and then pruning hard to create vigour, and – because the variety blooms and sets profusely – being extremely diligent and timely about thinning.

“The challenge I see, which I don’t think is hard to overcome, is getting the right size. We’ve learned to get it with some other varieties. We’re going for 100 count and better, knowing we’ll have some 113 and 125 in bags,” Kemp says. “We bud thin some varieties, we chemical thin early, we hand thin early. We’ll have to accept that it won’t grow as many tonnes per acre as a Gala or Mac, but if you get the right size fruit you’ll still get value.”

Crane expects even better than that.

“In our two biggest orchards, I peaked at 64 to 70 bins per acre of mostly 80s to 88s. You have to get aggressive. If you don’t get enough of them off [at thinning], if you leave them on there like grapes – it doesn’t matter what your variety – they’ll be tiny.”

Smitten is not Pegasus Premier Fruit’s first experience growing a patented variety. Crane says his company “got the bug” for club fruit varieties when it planted, grew, packed and shipped some of the very first Honeycrisp. He calls patent-protected varieties the ‘Starbucksing’ of the apple industry.

“I think we can make a good go of it,” Kemp says. “The retailers are enthusiastic about putting Smitten on the shelf and letting consumers decide if they like it. To say it will replace Gala, that’s not realistic, but I think it has real potential to be like an Ambrosia. Ambrosia’s sales continue to grow. It’s got a ways to go yet. For a few years some people were a bit discouraged because it’s not easy to get a new variety going. But, it has gained momentum.”

“The retailers are enthusiastic about putting Smitten on the shelf and letting consumers decide if they like it. To say it will replace Gala, that’s not realistic, but I think it has real potential to be like an Ambrosia. Ambrosia’s sales continue to grow. It’s got a ways to go yet.”

Crane believes the variety should also see a boost in consumer uptake due to the fact that the market is already familiar with the variety via imports from New Zealand over the past couple years.

“There’s no guarantee. But, this one’s already in the marketplace. I’m encouraged because it’s already being bought by consumers and we’re just going to supplement our fruit into the marketplace. From what I see, we can grow it out here in Ontario,” Kemp says.