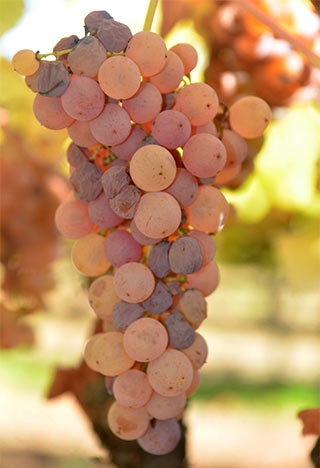 December 14, 2015, Davis, CA – For hundreds of years, the fungus Botrytis cinerea has been key to making the world’s finest dessert wines. Now, University of California – Davis researchers working with Dolce Winery in the Napa Valley show how the fungus changes plant metabolism to produce new flavours and aromas in white-skinned grapes.

The UC Davis team found that during noble rot infection, Botrytis induces metabolic processes in white grape berries normally seen only during the ripening of red-skinned grapes. This was a novel observation, because white berries are, in fact, developmental mutants that cannot activate several ripening pathways such as the synthesis of anthocyanins, the molecules that impart the red color in the skin of red grape berries.

The research also confirmed that the reprogramming of grape metabolism by Botrytis results in the accumulation of key aroma and flavour compounds that make sweet wines made from botrytized grapes so special.

Findings from the new study appear this week in the journal Plant Physiology at http://bit.ly/1NJCJxV.

“This study demonstrates how effective it is to integrate genomics and metabolomics in analyzing the impact of plant-microbe interactions on plant metabolism under field conditions,” said plant biologist Dario Cantu of the UC Davis Department of Viticulture and Enology.

The work also may lead to new approaches to improving quality traits in grapes and other fruit, said Cantu, who led the study along with postdoctoral researcher Barbara Blanco-Ulate.

Winemakers have made use of the beneficial impacts of Botrytis cinerea – in the form of noble rot – since the 1500s. For example, white-skinned grape berries, naturally infected with noble rot, have been used to produce some of the world’s highest quality dessert wines, referred to as botrytized wines. These wines were first produced in specific regions of Hungary, Germany and France, but now are also made in Italy, Australia, New Zealand, South Africa and California. Botrytized wines are valued for their natural sweetness and distinctive flavour and aroma profiles, which include raisin, pineapple, apricot, pear and honey features.

In the newly published study, the researchers collected berries of a white-skinned grape variety called Sémillon over three years at the same time the grapes were being harvested for winemaking. They then used state-of-the-art RNA sequencing and metabolomics approaches, as well as enzymatic assays, on those grapes to demonstrate that noble rot:

The researchers also profiled the metabolites of commercial botrytized wines produced from the same vineyard where the grape berries were collected and verified that key compounds that result from noble rot are carried over to the wines.