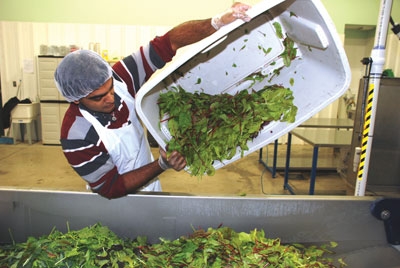 It’s called a Bob Wash, and no, it’s not a local car wash, but a machine for washing small amounts of leafy greens or vegetables. And the North American prototype unit is being used at Victory Organic Inc. in St. Catharines, Ont.

It’s the conceptualization of a simple question that was posed by Vivek Rajakumar, Victory’s 26-year-old entrepreneurial owner who is better known as Vik. He knew there were small machines like this in Europe, but they were designed to remove grit from field-grown crops, not greenhouse-grown salad greens. Besides, a service call is an ocean away, then there’s the cost of shipping any equipment, and as anyone who has ever taken a made-in-North-America electrical personal care item on a European vacation knows, they run on an entirely different electrical system over there.

So why not use a similar machine that’s made in North America? To that end he knocked on the door of Heinzen Mfg. Ltd. in California. It’s a recognized leader in the manufacture of food handling equipment and makes much larger machines used by Chiquita and Dole that can process up to 2,000 pounds an hour of leafy greens.

There he spoke to sales engineer Bob Johnson, whom the Bob Wash is named after, and the idea for a smaller machine for a smaller operation went from drafting board to finished machine in about 18 months. The prototype unit arrived at Victory Organic in mid-May 2011 and now there are now some 25 Bob Wash machines in operation, mostly in the northeastern United States, to meet a growing regional demand from small organic growing operations.

“It sort of stuck and got away from us,” Bob Johnson said about the name of the machine that he designed and bears his name, but is really an “integrated short order wash system.”

Agri-Food innovation award
The problem-solving ingenuity of the two men caught the attention of the Ontario Ministry of Agriculture. Last October, Victory Organic was one of three agricultural operations to receive a Leaders in Innovation Award from the Ontario Ministry of Agriculture. The citation says the Bob Wash offers an affordable on-site answer to large commercial wash machines while at the same time providing the same degree of food safety. Additional funding came from the Food Safety and Traceabilty Initiative (FSTI) program of the agriculture ministry.

Like all good ideas, it’s a simple one. Thoroughly wash the leafy greens in water that’s properly chilled and treated with a small amount of hydrogen peroxide to kill bacteria and prolong shelf life. High-pressure spray nozzles along the side of the trough act much like a Jacuzzi by churning the water that’s chilled to just above freezing. Move the product on a conveyor belt to a spin dryer, then package and ship it in a timely fashion.

Johnson said it’s essentially an agitation system that fully wets the leafy greens, which are pushed by a flume in a stainless steel trough to the conveyor belt.

“It’s simple in the sense that it’s all one unit,” he said.

“It’s like a car, you can’t have one piece without the other,” Vik said.

An important piece is the cleated, food-grade polyethylene conveyer belt that’s designed to shake out and hold on to dirt and broken greens not removed in the wash.

Design changes have been made to the original machine, but they’re mostly alterations to process different agricultural crops. Vik hasn’t altered the design of his made-to-order Bob Wash but, like any farmer who has ever improved on factory built equipment with the help of a local machine shop, said, “Everything can be customized.”

Victory Organic is a seed-to-store-shelf greenhouse operation that processes some 300-400 pounds of tender leafy greens a week. That’s far less than the Bob Wash capacity of some 5,000 pounds a week working eight hour shifts, four days a week.

“We work intensively and get the work done,” Vik said about the short work week enjoyed by his three employees.

Picked, processed and shipped immediately in clear plastic blister packs, the salad greens have a 12-day shelf life. Victory Organic used to sell unwashed salad greens from the greenhouse, but somewhere on the way to end users it has to be washed. Vik felt that might as well be at the source.

“We do a lot in a small space (870 square feet), which is as small as anyone gets,” he said about the need for a small washing unit.

He looked for two years in Europe for one that was small enough to fit his operation, and spent a year working with Heinzen to develop the Bob Wash. He was looking for something in his price range that could process as much as 1,000 pounds a day, not 1,000 to 2,000 pounds an hour.

Right now he’s expanding within his customer base and adding 12,000 square feet of greenhouse space – a 50 per cent increase – which is now under construction. That’s to meet the growing demand in the few stores where Victory salad mixes are sold and not to expand the number of sales outlets, Vik said.

Started in 2007, Victory Organic is named after the Victory Gardens of the Second World War, created when the government gave homeowners seeds to grow in their backyard gardens at a time when food was rationed. “It should have kept going,” Vik said about the rationale behind the Victory Gardens program as it applies to today’s movement to “grow food locally and distributing locally.”

The Rajakumar family, originally from Sri Lanka, came to Canada in 1996 when Vik was 10 years old via South America, where Vik was born. His father Raj has an adjoining business, Millenniumsoils Coir,  that imports coconut fibre from Sri Lanka to make grow bags used by greenhouse vegetable growers.