A new era in horticultural biocontrol is underway both in commercial and research fields. 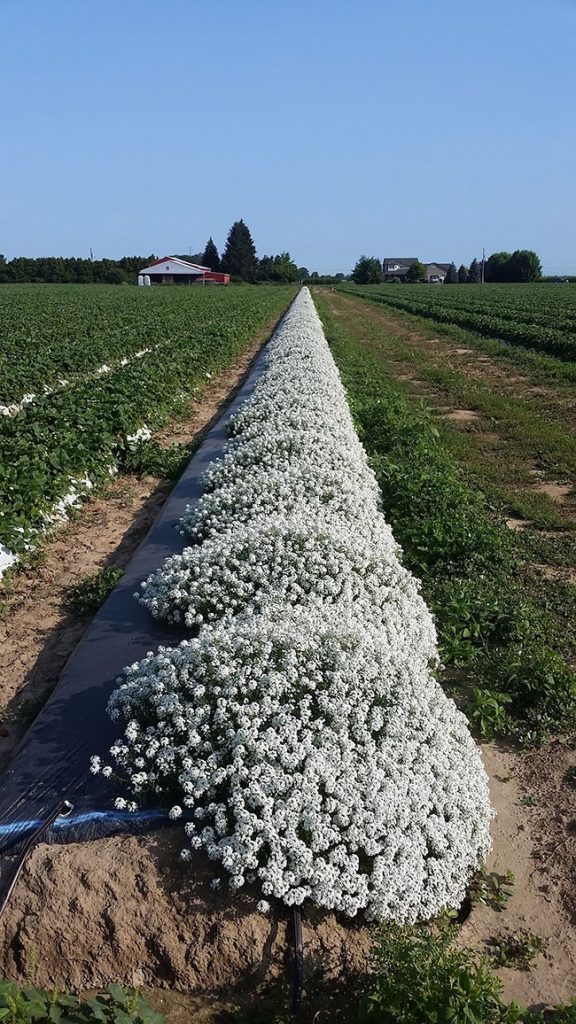 The use of biocontrol pest methods in horticulture is growing, whether it’s trap crops, pheromone traps, predatory insects or biopesticides.

David Saunders can attest that across the country, predatory insects are now being commonly used to protect various berry crops. “Biocontrol is expanding all the time,” says the technical salesperson at southern Ontario-based Plant Products (a distributor for Biobest Canada). “There is lots of interest.”

Tigchelaar Farms is one of the many Canadian horticulture operations using biologicals. It’s now entering its fifth season purchasing predatory insects to take care of thrips and more at its ever-bearing strawberry operations in Jordan and Vineland, Ont. The business is owned by brothers Dan and Jeff Tigchelaar, and Dan’s son, Matt, runs the spraying and biological programs.

It was 2013 that the Tigchelaars first noticed they had a big problem with thrips.

“The weather that year was very conducive to thrips and that’s what caused their numbers to explode,” Matt explains. “Also, part of the issue at Jordan is that we’re surrounded by greenhouses that grow ornamental flowers. Some of them have to use very strong insecticides that are legal to use on ornamentals to control various insects, or otherwise their crops would be gone. We have no proof that the thrips coming out of the greenhouses were completely resistant to any insecticide we could use, but it was a safe assumption to make. Nothing worked in 2013 and it was worse at Jordan and we had to walk away from that farm that year.”

The Tigchelaars have some family connections in the greenhouse industry and back in 2013, they discussed their problem with those folks and others in the sector as well. Eventually they approached Plant Products and staff there recommended using Orius (also called the minute pirate bug, delivered in bottles) and Cucumeris mites (delivered in paper packages). Matt notes that Orius targets all stages of thrip from larvae to adult, which is a benefit over the Cucumeris because they mainly go after just the thrip egg and larvae stages. Consequently, in 2016 the Tigchelaars began to cut back on Cucumeris and bumped up the use of Orius.

In terms of host plants for Orius, Matt says Plant Products recommended the use of Alyssum and ornamental pepper banker plants in the headlands on the outskirts of the field. However, the Tigchelaars noted after the first two years, the Orius were more likely to be found in the Alyssum early in the season, when thrip control matters most. They made the decision to use only Alyssum from that point forward.

Later in the season, the Tigchelaars use conventional insecticide spray for control of spotted wing drosophila.

“We get through the early to midseason with just using ‘bio-friendly’ chemicals and that way when we need to spray for spotted wing, we know it’s going to work,” he notes. “The biologicals are not completely wiped out when we start spraying, but their numbers are greatly reduced.”

He notes that on the whole, they have to spray insecticide just as much as they did before using biologicals – and that it’s therefore more expensive to cultivate ever-bearing strawberries using biologicals – but it’s necessary to control thrip. Matt adds that Orius and Cucumeris also eat aphids.

The Tigchelaars have also been spraying bio-friendly chemicals to control leafhopper but Matt says another solution is currently needed.

“[Last year] was our worst ever for leafhopper,” he reports. “Predatory insects like Orius prefer thrips to them and don’t really have any effect. We will be talking to Biobest this winter to discuss early leafhopper control for 2018, both chemical or biological solutions.”

In 2017, the Tigchelaars also used Fallacis mite in July for control of spider mite and cyclamen mite.

Overall, the Tigchelaars are pleased their program is working well.

“We’ve been constantly learning,” says Matt. “It’s a completely different way of looking at things for my Dad and uncle, because when they used to see a thrip they would spray and that won’t work now. You have to go and look and if you see Aurius nearby the thrips, it’s a matter of trusting they will do their job. It’s hard sometimes to not overreact and order more biologicals.”

Another pest of ever-bearing strawberries is being studied by Tristan Jobin, a scientist at Agriculture and Agri-Food Canada (AAFC). Jobin studies many areas of biocontrol and started a study of tarnished plant bug (TPB) control in spring 2017. The use of one active insecticide ingredient that controls TPB, endosulfan, was phased out in December 2016 and three others are currently under regulatory review.

Jobin’s two-year TPB study focuses on the use of a trap crops – a crop that the pest prefers to feed on and lay eggs on, keeping it away from the crop of concern.

“Sunflowers have been proven effective in Europe with insects of the same taxonomic group as TPB,” Jobin explains. “Now they are using sunflower extracts in traps in the greenhouses, but we planted them in the field in our study.”

At two sites in Quebec, Jobin and his colleagues planted three conventional sunflower varieties that collectively have flowering that spans most of the two months that ever-bearing strawberries flower. They were planted surrounding a strawberry field. A few dwarf varieties were also planted in an inter-cropping fashion.

“We focussed on monitoring movement of the over-wintering TPB and where they laid eggs and found last year that the TPB were indeed in the sunflowers and lay eggs there,” says Jobin. “The nymphs are not able to move to the strawberries so they cannot cause damage there, and we saw increased yield in strawberry plots with sunflowers versus plots without. So, we can say there is the potential to use sunflowers as a trap crop for TPB, but have yet to evaluate the advantages and roadblocks for the grower of using sunflowers surrounding the field or in an inter-cropping fashion or both. We will see about that this year [2018].”

Tigchelaar Farms plant rows of Alyssum within strawberry plantings as a host plant for Orius mites, used to control thrips.

Use of wasps in biocontrol
Several potential biologicals have been screened for use against leek moth around the globe, including Diadromus pulchellus, a parasitic wasp. Agriculture and Agri-Food Canada’s Dr. Peter Mason released these wasps in 2010 within the Ottawa Valley following extensive screening for non-target impacts.

“The parasitoid is from Europe where it naturally occurs, and attacks and kills pupae of leek moth its only known host,” Mason explains. “We have evidence that this biological control agent has established [in eastern Ontario] although it is present in low numbers.”

Surveys are continuing to determine how much the presence of the wasps is responsible for the low populations of leek moth for the past several years. Starting in 2015, Mason and his colleagues have been releasing the wasps in leek and garlic fields in Québec in collaboration with the Ministère de l’Agriculture, des Pêcheries et de l’Alimentation du Québec (MAPAQ) and the Institute de Recherche et de Développement en Agroenvironnement. Mason notes that it often takes 10 or more years to make a determination of whether these wasps are successfully established.

Another parasitic wasp Tetrastichus setifer has been released in the Ottawa area by Dr. Naomi Cappuccino at Carleton University. This wasp is originally from Europe where lily leaf beetle (which destroys Asiatic lilies) naturally occurs. It kills the beetle larvae.

“This biological control agent has been highly effective in reducing lily leaf beetle populations, allowing people to once again grow lilies in the Ottawa area,” notes Mason. “[It] is now being released at various locations across Canada wherever lily leaf beetle occurs, for example Ontario, Québec, Manitoba and Alberta.”