Features Weeds
Beyond the weeds: Looking back to move forward

Planning can help old-school tools be more effective. When it comes to weed management, an ounce of prevention is worth a pound of metal. 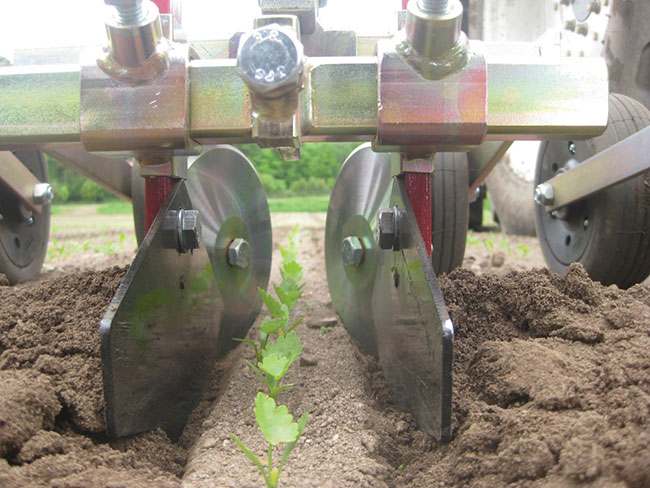 Pandemic-related disruptions to supply chains last year, combined with limits on the kinds of chemical controls registered for use in Canada, have many growers taking a closer look at low-input weed management. While organic growers have wrestled with the challenge for years, Wisconsin sustainable horticulture instructor Sam Oschwald Tilton took his love of metalwork as the starting point.

“When I first got into mechanical cultivation, I got into it because I was a metalhead,” he said. “I loved welding and building things and I was a vegetable grower. But the deeper I got in, I realized that my interest in shiny pieces of metal was misplaced because if I really wanted to do effective weed control, I had to see tools as part of the bigger picture.”

Tools work in partnership with nature, which is the starting point for all agriculture, says Oschwald Tilton, who teaches at Lakeshore Technical College in Cleveland, Wis. Controlling weeds effectively begins with ecological controls, with tools helping manage issues that spring up during the growing season. An ounce of prevention is worth a pound of metal, to turn a phrase.

“These ecological techniques can really pay off big time,” Oschwald Tilton says. “They’re a lot easier to do … than to have the right tool at the right time.”

“The mistakes that you make at the ground floor get magnified as you move up. The tools are not magic,” he says. “Even with the same tool, adjusted perfectly, the weeds in my soil that I’m starting with are either going to set me ahead for success or hold me back.”

Stale seed-bedding aims to eliminate weeds before the crop emerges, reducing competition later in the year. The practice involves encouraging weed germination early in the season, then tilling them into oblivion.

Smart growers will know the top three weeds on their properties, their lifecycle and be able to recognize them at each life stage. This will give them an edge on weeds throughout the season.

He encourages growers to cultivate just the top 4 centimetres (cm) of soil, where 90 per cent of horticultural weeds germinate. This is gentle on the soils and prevents daylighting buried weed seeds.

“It’s very important that I can kill the weeds that have germinated but not bring up the new weeds,” he says. “When my crop comes up there’s a lot less competition.”

Working with field conditions is a focus of Krystine McInnes of Athena Organic Farm, who farms 60 acres near Cawston, B.C., on the floodplain of the Similkameen River. Seasonal flooding churns the soil, making the river-bottom land vulnerable to weeds. In addition, the shape of the valley funnels winds that introduce seeds from the surrounding wilderness. Workers have put in 12 hours a day in bad years just to stay ahead of the weeds.

“Once the weeds get away from you, you’re cooked. You’re done,” says McInnes, who purchased the farm in 2015 after leaving a career in real estate development.

Working to disrupt the soil biome as little as possible, she has worked to “learn the rhythm of the land, what the plants are trying to say.” A farm manager identifies problem areas, the dominant species of weeds present and addresses hotspots each season. Soil amendments and cover cropping have helped build soil health and reduce weed pressure. Those that emerge between the rows are harrowed.

Cultivating, whether as part of creating a stale seedbed or late in the season, will be more efficient if the field is designed with the equipment in mind. While plenty of row spacings exist – based on field size, desired densities and production targets – Oschwald Tilton notes that most equipment has been designed to accommodate three rows spaced 15 inches apart in a 30-inch bed, with a shoulder either side of six inches. Wheel spacing is 30 inches from the centre of the bed. The spacing needs to be flexible, however, both to account for the equipment as well as changes to field topography during the season. Shoulder space that was originally six inches may diminish after several passes, and as the crops mature.

The spacing should also account for the crop itself. While three rows spaced 15 inches apart can handle beets or carrots, reducing the density of the middle row (or forgoing it altogether) could mean more even sizing of the crop. Alternatively, the arrangement could allow for a larger crop, such as cabbage, in the outside rows without any need to retool the equipment or make multiple passes. Salad greens could be spaced seven inches apart.

“All of your equipment is going to be sized for that cultural system,” he says. “The sooner that you can choose your cultural system, [the sooner] you can really size your machinery and start there.”

“You’re only as good as the jig you have in the field,” says Lydia Ryall of Cropthorne Farm in Delta, B.C., which has 16 acres of field crops.

She began stale seed-bedding this past year, but having equipment that can deliver consistent results is key. Driving a straight line through the field is one thing, but using the same configuration is equally important.

“If I’m using a certain tractor for seeding, it’d be nice to use it for the basket weeder,” she says; she also flames weeds. “You really want to hit the weeds when they don’t even have a first true leaf on yet so it doesn’t have the energy to come back after cultivation.”

A consistent set-up will help achieve this. Oschwald Tilton recommends calibrating equipment in the shop then making adjustments as equipment responds to field conditions. The centre of the row should be indicated on the toolbar, a standard depth can be set for the tools, and row spacing can be indicated.

“If they move during the season you’ll know right away,” he says. “I like to set everything evenly in the winter in the shop because I can do it accurately, and then when I get out to the field, if I have to change anything, then I know I can deviate from a common set point.”

Consistency doesn’t rule out diversity, however. This is where Oschwald Tilton’s love of metalworking comes into play. Basket weeders, finger weeders and cutaway discs (dual knives) each have their place, with specific advantages for burying weeds, keeping them away from the crop and reducing competition. Sometimes a combination works best; knives, for example, can help break up soil ahead of a finger weeder, making its action more effective.

Spyder weeders, revived and manufactured by North Dakota-based Tilmor LLC, are particularly useful in thick, wet soils because they don’t get gummed up like finger weeders. During the season, cutaway discs can be ideal for burying weeds between rows while giving carrots room to grow.

“You want to have the goal of not adjusting each tool every single time,” Oschwald Tilton says. “[But] if you can have five different tools that do five different jobs … it really makes things easier.”