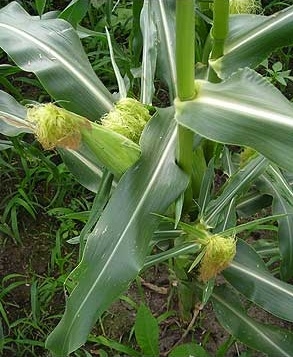 February 12, 2013 — Engineered to produce the bacterial toxin, Bt, Bt corn resists attack by corn rootworm, a pest that feeds on roots and can cause annual losses of up to $1 billion. But besides merely protecting against these losses, the Bt trait has also boosted corn yields, in some cases beyond normal expectations.

So what makes it so successful?

Fred Below and Jason Haegele of the University of Illinois at Urbana-Champaign set out to answer that question by determining how Bt corn uses nitrogen in the soil. Nitrogen is an important nutrient for corn, and with better root systems, it’s possible that Bt corn uses nitrogen differently than non-resistant strains, the scientists hypothesized, in turn affecting corn production. The study, published in Crop Science, showed just that – Bt corn had higher yields and used nitrogen more efficiently than non-resistant corn.

With its resistance to corn rootworm, Below explains, Bt corn has healthier and more active roots than corn without the resistance trait. And a better root system can lead to improved function for the plant as a whole.

“If you can protect the investment the plants made in the root system,” explains Below, “you can realize everything that roots do like take up nutrients and water and provide anchorage.”

More efficient use of nitrogen in the soil would be especially beneficial in areas where nitrogen is lost through heavy precipitation or erosion. Additionally, Bt corn would fare better at current levels of nitrogen use in the U.S.

The healthy roots and efficient nutrient use of Bt corn could lead to changes in management practices that would further increase production. Banded or placed fertility, a method by which a farmer can place fertilizer where the roots are likely to be, would be more effective when used on the robust root system. Additionally, increasing plant populations could further increase yield.

“When you have a higher population of plants, each individual plant has a smaller root system, so that made it difficult to increase plant population when you had insects chewing on the roots,” explains Below. “With the Bt corn, though, you can protect the root system and grow more plants.”

In addition to its utility in crop production, Below is hopeful that Bt corn will open up new avenues of research as scientists begin to better understand root systems. “Plant roots are below ground and are hard to study. It’s a big, unexplored horizon, both in agronomics and crop biology. I think that’s why the trait is of such value.”