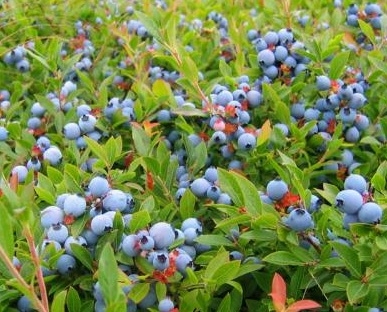 The trial was conducted near Parrsborough, NS, in low bush blueberries with the Wild Blueberry Research Program at Dalhousie University. The trial utilized BVT’s newly developed honeybee system, consisting of a honeybee hive outfitted with dispenser technology through which BVT’s proprietary plant beneficial microbe, BVT-CR7, can be delivered to crops. The trial was designed to determine the effectiveness of the BVT technology in controlling Botrytis blight (gray mold) and Monilinia blight (mummy berry), two common and devastating diseases affecting blueberry crops across North America, compared to untreated control and current chemicals standards. The trial also examined increases in productivity of the crop measured by marketable yield.

“Our yields went up quite substantially when we used the BVT system, whether alone or in combination with chemical fungicides, but they didn’t go up where we used the fungicide alone,” said Dr. David Percival, blueberry research program director and professor at Dalhousie University in Nova Scotia. “I was really surprised by the first results. I went back and double-checked the raw yield data, then the spreadsheet to make sure the statistical program was correct. The results indicate the potential for floral blight disease control and increased berry yields with the use of BVT technology. Future work will allow us to fine tune the use recommendations.”

“These are excellent results once again for the company and firmly establishes another major market opportunity,” said Ashish Malik, CEO of BVT. “Notably, this was the first time we tested our honeybee delivery system in a replicated R&D study, and we got great results. Having a proven system that works with honey bees alongside our first system designed to work with commercial bumble bee hives allows us to reach a far wider market and gives us options to deliver solutions for growers based on the specific needs for their crops.”

Blueberries are a high-value crop, fetching as much as US $18,000 in revenue per acre in certain regions. There are almost 300,000 acres of blueberries cultivated in the US and Canada with total farm gate value of US $ 1.1 billion. Blueberry production in North America represents 54 per cent of the worldwide cultivation of the crop with key growing regions including the Atlantic provinces and British Columbia in Canada, Washington, Oregon, Georgia, Michigan, California, North Carolina, New Jersey, and Florida in the U.S.