Features Insects
Be on the lookout for spotted lanternfly

Spotted lanternfly is a pretty pest that causes more than $50 million USD in damage per year in Pennsylvania alone. It has been found in Buffalo, NY, and is “on the move.” 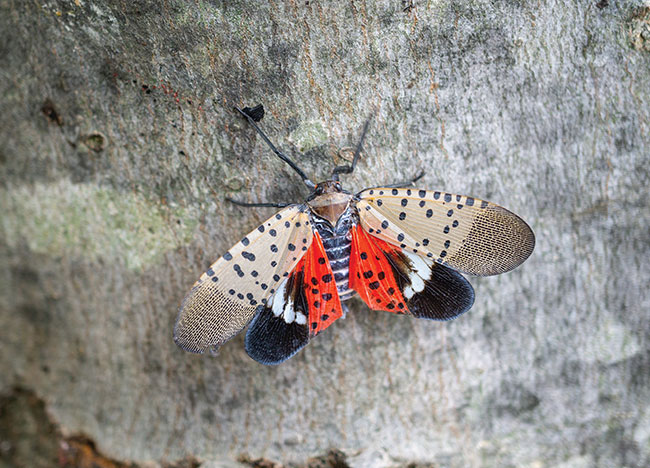 Despite its moth-like appearance and its deceptive common name, spotted lanternfly (Lycorma delicatula) is neither a moth nor a fly.

“It’s a plant hopper,” says Hannah Fraser, horticulture entomologist with the Ontario Ministry of Agriculture, Food and Rural Affairs (OMAFRA). “Plant hoppers are insects that have piercing, sucking mouthparts – they use them to pierce into a plant and suck out the sap.”

Spotted lanternflies are striking insects: in their immature nymphal stages, they’re black with white spots and later black with red and white markings; as adults, they have beautiful pink and grey forewings, wings with black spots with grey patches at the tips, and bright red, black and white underwings. The adults are large insects, at more than two centimetres in length, which makes them relatively easy to spot – which is one boon, considering the damage they can cause in horticultural and tree crops.

One study, conducted by economists in Penn State’s College of Agricultural Sciences, estimated that if left uncontained, the pest could cause potential losses in the range of $324 million USD to Pennsylvania’s agricultural and forestry sectors. The state already reports losses of $50.1 million USD per year due to spotted lanternfly.

Since it was first detected in Pennsylvania in 2014, the pest has spread to New Jersey, Delaware, Maryland, Virginia and New York. At the time of writing, a Cornell University interactive map showed that at its northernmost range the pest had become established in New York’s Erie and Onondaga counties and had been detected in Monroe, Oswego and Ontario counties.

So far, spotted lanternfly has not been detected in Ontario, and it’s difficult to guess when it might arrive, Fraser says.

“It’s definitely on the move. [But] it’s really difficult to predict how it will spread in terms of timing – that’s why we really need to highlight how important it is to find this pest and have a timely response.”

Pest life cycle
Fraser says that since spotted lanternfly is still relatively new to the U.S. and has not yet been discovered in Canada, Canadian researchers rely on information from U.S. colleagues about the pest’s behaviour, and that information is constantly being updated.

The insect has one generation per year. Egg masses overwinter, covered by adult spotted lanternflies in a protective putty-like substance. In the spring and summer there are four nymphal development stages (instars) followed by an adult stage. Though winged in the latter stage, spotted lanternfly cannot fly well, Fraser says, which means natural dispersal is primarily local. Long-distance spread is associated with human activity.

In the earlier instars, the insects will feed on a wide range of plants, including trees, shrubs, hops and herbaceous plants; as they get older, spotted lanternflies prefer woodier targets, such as tree of heaven, maples, walnut and fruit trees, and grapevines.

“There can be heavy feeding on certain plants at certain times of year,” Fraser explains. “Some are more at risk than others. Heavy feeding has contributed to the death of grapevines. They also really like the tree of heaven, and do heavy feeding on black walnut saplings, but [don’t necessarily cause] the death of other host plants.”

Spotted lanternflies don’t target the fruit of these plants, but the stems; with their piercing, sucking mouthparts, they can feed right through the trunks of trees to reach plant sap. Even if hosts are not killed, feeding can stress and weaken them. The pests can feed right up until the first frost, which kills them.

Monitoring efforts
Spotted lanternfly is a federally regulated pest in Canada, and Fraser says OMAFRA is encouraging growers and the general public to alert the Canadian Food Inspection Agency (CFIA) if they find evidence of the pest. “Early detection is really, really important,” she says.

As part of its ongoing monitoring efforts, OMAFRA researchers have been regularly scouting for the pest in high-risk regions, including the wine-producing regions of Niagara, Pelee Island and Prince Edward County, with support from Ontario Grape and Wine Research Inc.

In 2021 and 2022, they set up traps in these counties and along transport corridors such as the 401 Highway and some rail corridors; the traps remain up until October.

“Those are more high-risk in terms of movement,” Fraser explains. “There’s been a lot more travel lately, and if people are travelling through infested areas of the U.S., they should check vehicles, campers and equipment for egg masses or the insects themselves.”

In the field, producers should look for signs of infestation when they’re performing regular scouting. “Are you seeing extensive oozing or weeping from little wounds in trees? Are you seeing egg masses? Are you seeing massive amounts of honeydew building up under plants with sooty mould? These are signs that there’s something worth looking for,” she adds.

If found, egg masses should be scraped into a container of alcohol or hand sanitizer. Nymphs or adults should be captured and killed. “Take lots of high-quality photos, flag the location [where the pests were found] and contact CFIA as soon as possible,” Fraser says.

In Canada, there are no pest control products yet registered on spotted lanternfly, although the pest has been prioritized by the minor use pesticide program, and researchers are taking note of product registration in the United States.

With luck, spotted lanternfly will not reach Canada for a long while, if it ever does. In the meantime, Fraser says researchers are doing everything they can to stay on top of the threat.

“Partnerships are really critical with this pest,” she says. “Our colleagues in the U.S. are learning and sharing information. There’s a lot of collaboration that’s ongoing right now within federal government agencies and people in the industry who are invested in working on this pest and finding solutions for it.” 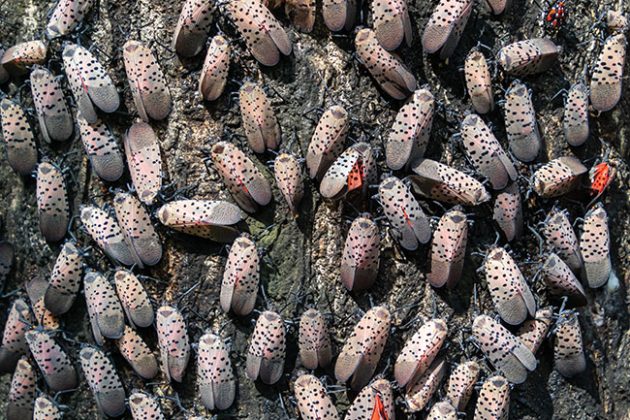