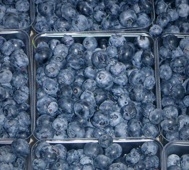 “While the season was a little slow to start, the rain in June combined with the fantastic sunny weather from July through September resulted in a record year once again,” said Debbie Etsell, executive director of the B.C. Blueberry Council. “Our farmers were able to continue harvesting well into mid-October this year, maintaining high-quality berries through to the end of the season.”

This year’s harvest tops last year’s record crop of 95 million pounds. The increase can be attributed to both additional acreage of plantings maturing as well as the favourable weather conditions.