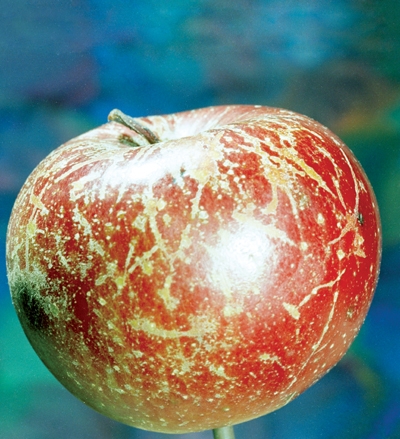 European sawfly
Erika Bent, who operates Agricultural Pest Monitoring, told attendees of the recent NSFGA annual meeting the European sawfly was only an occasional problem in Nova Scotia until 2005 and 2006. By the 2008 harvest, fruit injury level ranged from zero to six per cent. Six per cent is “quite high” for one insect, said Bent.

Sawfly larvae overwinter in the soil, pupate in the spring and emerge as adult flies just before the apple trees bloom to lay their eggs in apple buds and blossoms, Bent explained, adding it takes eight to 10 days for the sawfly’s eggs to hatch. Within four weeks, they are fully grown larvae feeding on the fruitlets.

Growers can reduce sawfly damage by applying insecticide when the larvae are moving from fruitlet to fruitlet, said Bent, who during trapping research in 2007 began capturing adult sawflies about May 22 and spotted their first eggs by June 5. She recommends spraying for sawfly at the time apple blooms are opening.

Control is difficult, Bent admits, as growers cannot spray for the adult sawfly during bloom. Instead, she suggests spraying as close as possible to the bloom to reduce the adult insects, then spraying again after the bloom to stop the larvae from moving between the developing fruit.

Currently, there are two insecticides registered for sawfly in Canada, Bent explained, and one of them – Guthion – is being phased out, leaving Assail as the only control for sawfly.

Quebec and Ontario are introducing a predatory parasite for European sawfly, but it is not a stand-alone control, she said.

Powdery mildew
Bill Craig, a tree fruit specialist with Agra Point, describes powdery mildew as a secondary disease of apples, “although now it is more prevalent.”

Powdery mildew in its primary cycle overwinters in the apple buds, Craig said. The disease’s secondary cycle occurs when it infects the tree’s foliage and causes russeting on apples.
“[During the 2010 season] I really saw some heavy fruit russeting,” he said.

Conditions favouring powdery mildew infection are typicallly warm days and cool, moist nights, with a relative humidity greater than 90 per cent as the leaves are growing. Temperatures range usually between 10 and 25 C, with the optimum being between 19 and 25 C, Craig said, adding that temperatures between 24 and 28 C will kill the infected buds and the powdery mildew fungus.

Craig noted powdery mildew is the only fungal disease that can infect without wet conditions from rain or dew. The disease also likes warm, dry weather. Last May, Nova Scotia had 16 days in the optimal range for mildew, he said, adding that the average mean temperature was 12.3 C compared to the usual monthly average of 10 C.

Apple tree leaves are vulnerable to infection after emergence, Craig said, and the infection will continue as long as shoot growth continues.

There are numerous apple cultivars susceptible to mildew and some cultivars, like Honey Crisp, may have even increased susceptibility to the disease.

Craig recommends a fungicide program to reduce the spore load from primary infection and prevent secondary and fruit infection. He suggests growers get their first application on by the first week of May from the tight cluster, spraying again in five-to-seven-day intervals until petal fall, then continue with covering sprays until terminal bud set.