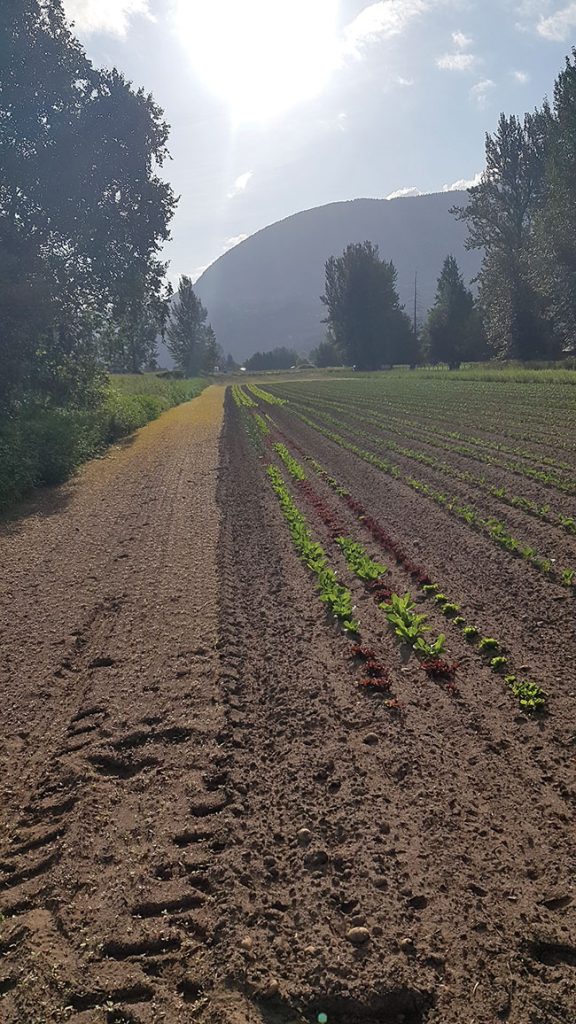 British Columbia growers faced a year unlike any other in living memory in 2021, as six months took them from some of the hottest days on record to an extended cold spell where windchill drove temperatures to -20 degrees Celsius – a full 60 degrees below the summertime highs.

Combined with this was the kind of precipitation patterns climate change models have been predicting for decades – drier summers and heavier, more intense autumn rainfall that runs off rather than recharging aquifers. Growers across southern B.C. reached Level 4 on the province’s six-tier drought scale last summer, with some even reaching the most extreme, Level 5, and losing access to irrigation water. But in November, nearly 3,000 acres of fruit and vegetables in the Fraser Valley and elsewhere were underwater after storm systems – having delivered twice the normal monthly rainfall in September and October – delivered twice the region’s usual allotment of rain for November on the weekend after Remembrance Day.

“We get enough water in the winter for our local fields that we’re trying to get the water off. We don’t need it to be wetter,” says Andrew Arkesteyn-Vogler of Crisp Organics, which farms 20 acres in the Barrowtown area of Abbotsford between the Sumas and Chilliwack rivers.

The intense rains and runoff from the mountains either side the Fraser Valley led to the breach of dikes and put pressure on the pump station that usually sends water into the Fraser River. Arkesteyn-Vogler’s fields flooded, ending the season and submerging leeks as well as a few root crops.

But the rains also washed away the incipient snowpack, which feeds the river and in turn the irrigation ditches that provide water to many growers in the region.

“During the wet season, our land is being drained constantly by the Barrowtown pump station, and then in the summer all those ditches are backfed with water,” he says. “It’s not like we don’t have water, it’s just that we have too much of it in the winter and then not enough of it in summer.”

This was the situation last year. A dry spring culminated in extreme heat at the end of June that sent temperatures soaring past 42 C for three days. Demand for irrigation water went up and some growers engaged in evaporative cooling to keep fruit crops cool.

Crisp Organics has four irrigation wheels that operated at maximum capacity throughout the heat wave, something that’s become increasingly common in recent years as springs have become drier. While the ditches that cross the property delivered enough water, water levels fell as the summer deepened.

“We have dikes and ditches around most of our property,” Arkesteyn-Vogler says. “Our water supply was good in the majority of them, but the river levels as the season progressed got lower and they were having trouble keeping the water in the ditches for the first time I’ve seen.” 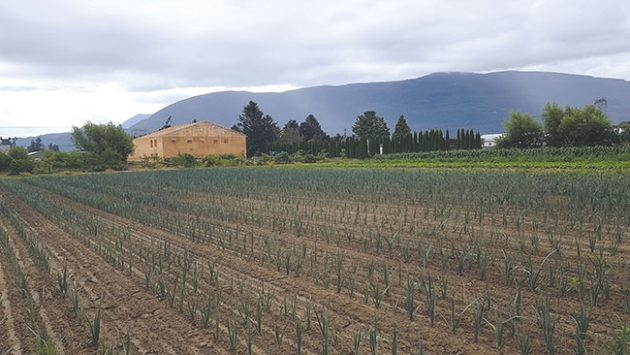 Growers in Delta, at the mouth of the Fraser River, see similar issues, compounded by tidal influences. High tide sees a wedge of dense, incoming saltwater flow under the lighter freshwater moving downstream, resulting in more saline intake at the pump stations. The lower the streamflow, the further upstream the wedge penetrates. This creates problems for growers as far inland as Richmond in late summer, when streamflows are at their lowest.

This issue is one identified by Climate & Agriculture Initiative B.C. (CAI), established in 2008 through the B.C. Agriculture Council and Investment Agriculture Foundation of B.C. to address issues related to climate change. Today, it delivers adaptation programs on behalf of the B.C. Ministry of Agriculture, Food and Fisheries.

Its modelling indicates that by the 2050s, the Fraser Valley will see summer precipitation decline by 12 per cent, while snowfall is predicted to drop by 50 per cent even as the number of days exceeding 30 C more than triples. CAI released a report last fall examining the challenges of a warming climate and suggesting ways farmers could maintain access to water.

“For a long time people felt they were going to be fine in terms of supply, but the reality is there’s lots of pressures on water in that region,” says CAI director Emily MacNair. “We wanted to do an initial look at where it made sense to take some next steps on those issues for agriculture … to reduce their vulnerability.”

The action items include studying connections between streams and aquifers in the region, drafting plans for new infrastructure including pump stations, and on-farm water storage.

The ideas are attractive, but not simple. The region’s aquifers have long been under pressure from the range of uses noted above, and demands are increasing. The province’s new groundwater licensing system promises to entrench the rights of existing users, but it also licenses water use to a farm’s current crop, something critics say could restrict a farm’s access to water as needs change over the long-term.

Similarly, the idea of capturing rain currently lost to runoff is appealing but case studies need to be developed to show what’s possible.

“There’s a lot of challenges,” MacNair says. “Making good decisions about how to deal with this going forward is complicated.”

This is where producers are taking a second look at farm management to make themselves less vulnerable to water pressures. As an example, Crisp Organics is refocusing from farmers’ markets, which typically demanded year-round production, to wholesale. While margins are lower, it’s also more efficient in terms of overall resources.

“We’re trying to get more of our acreage planted in the March-April-May window, when hopefully we’ll get some actual rain,” Arkesteyn-Vogler says. “We used to do a lot of farmers’ markets and try to market year-round, but in the wholesale marketplace we’re trying to have a whole whack of food [available] for a shorter period of time. … We tried to be extended for over a decade, but you just face so many more elements.”

Planting earlier also reduces the risk of being unable to access fields to harvest crops in the event of heavy rains, for example. It also addresses labour issues, reducing the need for help after Dec. 15, the date for Seasonal Agricultural Worker Program (SAWP) participants to head home.

Reducing tillage is another strategy, one that also helps maintain soil carbon. This means finding ways to tamp down on weeds before they become an issue, which also helps reduce competition for valuable water.

“We’re certified organic, which makes it trickier because we rely more on mechanical cultivation,” Arkesteyn-Vogler explains. “We’re constantly breaking the crust of the soil to dry it out to kill the weeds.”

Growers such as Dan Oostenbrink of Chilliwack see stale seed-bedding as a way to reduce tillage. This practice involves tilling the top inch of soil weekly prior to planting a crop to expose the seeds of perennial weeds and grasses and give them a chance to germinate. The next rounds kill them. Seeds deeper than one inch won’t germinate, especially not if three inches of mulch are spread over the top.

But strategies like this are difficult to achieve on a commercial scale, says Arkesteyn-Vogler, who uses a thermal weeder to cook weeds before planting, helping reducing in-season weeding.

“We’ve done it in the past for carrots, but it might be something that we do a little bit more in general.” •