Lending a robotic hand to help with the high-skilled work of mushroom harvesting. 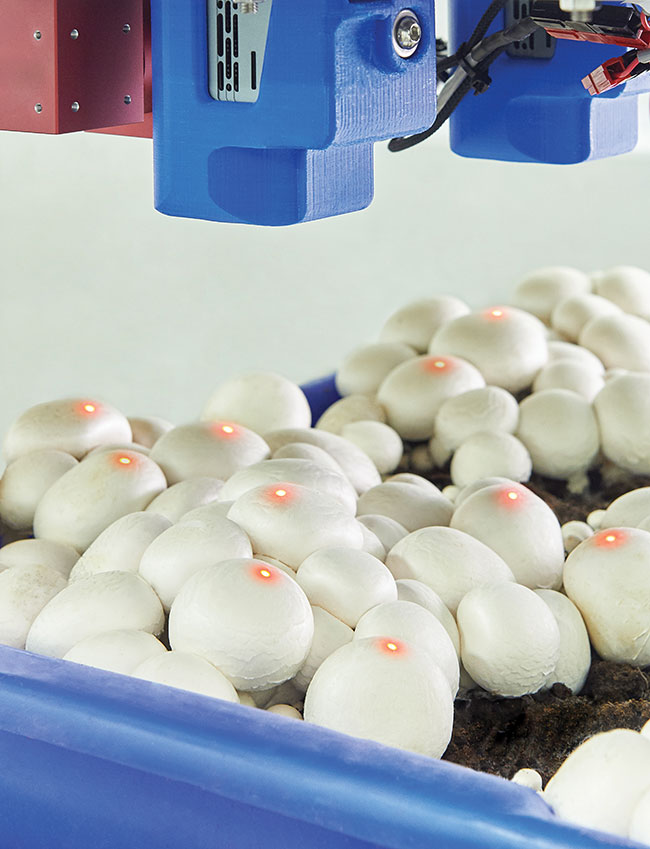 The solution’s imaging system captures data from each mushroom over its growth cycle and stores it in a database, which the Decision Support System uses to make decisions, such as the optimal time to pick a given mushroom. Photos courtesy of Vineland Research and Innovation Centre.

Growing and harvesting mushrooms is a labour-intensive, complex process. Mushroom houses are carefully controlled for temperature, humidity and carbon dioxide levels. The cycle starts with compost, which is then mixed with the mycelium spawn that will produce the mushrooms. Once matured, the compost is spread into the mushroom beds inside warm, dark rooms. A layer of peat casing material is added on top of the compost to keep it moist. This layer is watered well to ensure moisture. The temperature in the room is then gradually lowered – a sign for the mycelium to start sprouting mushrooms. The mycelium forms little buds that will develop into mushrooms. They start to grow, doubling in size every day. Then it is time to harvest.

The harvester stands on a trolley, which holds packing materials. The harvester goes up and down the beds, hand-picking mushrooms, which is the best way to ensure they will not be damaged. On average, a picker can harvest between 18 and 30 kilograms of mushrooms per hour.

“Row after row of mushrooms are nestled in the compost bed, without a lot of room between beds. This makes it difficult to see and pick, compared to a greenhouse or an open field. Mushrooms are very perishable and bruise easily. Because they are a fungus and not a plant, they don’t change colour as they ripen. So it is difficult to know when it is time to pick them,” says Aaron Hamer, president and CEO of Highline Mushrooms, which operates nine farms across Canada. The largest mushroom grower in the country and the largest organic mushroom grower in the world, Highline primarily grows white, cremini and portobello mushrooms for retail, food service and industrial customers. The company also purchases, packages and sells exotic mushrooms.

It is demanding work. Mushrooms are grown and harvested throughout the year and it takes training, skill and a lot of manual labour to do it right. It is also difficult to attract workers to the rural areas where mushroom farms are usually located.

“It is an enormous labour challenge. As consumption of mushrooms grows and the availability of labour declines all over the world, the industry is facing serious labour shortages,” Hamer says.

Mushroom production is an almost-billion-dollar industry in Canada, with more than 120 million kilograms of mushrooms produced in 2017. The industry employs 4,000 workers, about a quarter of them temporary foreign workers. But, according to a survey by the Canadian Agricultural Human Resource Council (CAHRC), the industry had a 19.3 per cent job vacancy rate in 2018. This was the highest in agriculture – and agriculture had the highest vacancy rate of any industry in Canada.

“The mushroom industry was very positive that, should they get enough people to work in the industry, it would grow and they would need more workers. But about one in three employers said they will fail because they were unable to find enough workers,” explains Debra Hauer, manager, AgriLMI (Labour Market Intelligence), CAHRC. “In 2018, employers estimated a $40-million loss in sales for the industry due to labour shortages. And this was not during the COVID-19 pandemic, so those shortages have become much more severe.” 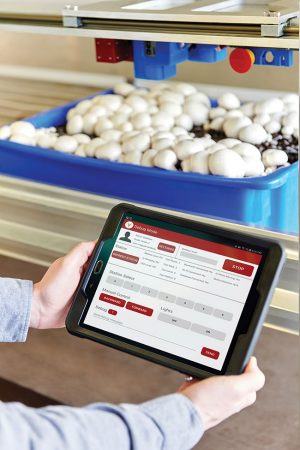 Growers use an app to operate the three-part automated mushroom harvester.

Lending an extra hand at harvest
A group at Vineland Research and Innovation Centre in Ontario is working to help solve this challenge. With support from Agriculture and Agri-Food Canada, through the Canadian Agricultural Partnership, Vineland has launched a $5-million Canadian Agricultural Automation Cluster, which aims to improve labour productivity using automation, artificial intelligence and precision agriculture technologies. One of the cluster projects is a robotic mushroom harvester.

The solution includes a vision (imaging) system, decision support system (DSS) and a gripper, which is the “hand” at the end of a robotic arm.

The imaging system captures data from the mushroom bed over time, which is passed to an algorithm that extracts data for each mushroom. The solution tracks various parameters from each mushroom over its growth cycle and stores them in a database, which the DSS uses to make decisions – such as the optimal time to pick a given mushroom. Growers can use an app that lets them filter data and view it in graphs and charts, allowing them to set harvesting parameters, such as mushroom size.

When it comes to picking the mushrooms, the solution mimics the harvester going up and down the beds to pick and pack the mushrooms. The most challenging part is creating the robotic gripper that can pick the fragile mushrooms without harming them.

“We are not trying to recreate the human, but to produce the system that matches what they’re doing,” Crawford says. “There will always be humans involved, no matter how good the robots are. But it will reduce the amount of labour required. Using a combination of automated and human harvesting will increase overall yield and reduce labour costs.”

Adopting change
While there is a general concern about technology’s disruption on human jobs, Hauer says that is not the case in agriculture. “Farmers are happy to adopt new technology, varieties or production practices in order to decrease the need for labour or be more environmentally friendly. And if you have a 19 per cent vacancy rate, nobody’s concerned that it will be taking away Canadian jobs. As a matter of fact, those jobs that involve the application of technology in agriculture would likely be those that would be of great interest to Canadians, if they only knew they were there.

“One thing farmers do ask is, ‘Will it make me money?’ That is something each business needs to answer on their own. And also, having the people who will be running the technology and maintaining it, who need to have increased skills. Who are those people and are there plans to have them in place?” Hauer says, adding that there is a need for greater connection between agriculture and the knowledge economy.

Hamer says he is glad researchers are trying to solve the labour challenges associated with mushroom production.

“There have been attempts for probably 30 years at developing a solution, but no one has been successful yet. It is crucial to pick a mushroom at the optimal time. If it is left too long, you can’t pick it or sell it. To come up with an algorithm has been difficult,” he says. “Mushroom harvesting is a relatively high-skilled position with experience being a critical component of success. The human decision-making process on which mushroom to pick is something that is difficult to replicate. And to create a [gripper] that will have enough force to pick up the mushroom but not bruise it is very challenging. We hope this technology will be successful. The proof will be in the pudding.”

Crawford says that as labour issues become more pronounced, new teams around the world are trying to create a mushroom harvesting solution. For example, Technology Brewing Corporation, in Salmon Arm, B.C., is developing one of its own, supported by $50,000 from the Agritech Innovation Challenge, a federally and provincially funded program.

He says mushroom producers recognize the need for some level of automation to remain competitive. “I think there is a strong appetite from growers to automate their farms in some capacity. But they want solutions that don’t require a lot of upfront modification to their infrastructure and process,” Crawford says. “Some past developments required an entire rethink of the whole farm and how it operates. This may work for a new farm, but an existing farm may not have the capital or desire to invest or change a lot of what they’ve been doing. So my mandate is that the technology we design should be able to adapt to the farm and not the other way around.”

Hamer says Highline Mushrooms is interested in learning more about the specifics, such as how much the solution will cost and whether it will be feasible for a typical farm operation.

Crawford says he is unable to provide an exact cost at this time. “But our development has always been driven by market demand and as such, we are looking at creating a solution that makes financial sense for growers. Without providing specifics to our market and financial analysis, the economics involved with implementing our system will make it an attractive option for all growers,” he says.

Vineland is in the process of validating its technologies and integrating them into a cohesive solution. The next steps involve testing by a farm partner and then commercializing the solution with a Canadian manufacturer to produce the technology. While an exact date is not certain, Crawford says its anticipated release is set for spring 2023.

“I think mushroom harvesting is probably one of the more challenging horticultural crops to automate,” Crawford says. “And it’s interesting and promising to see there are a lot of teams working on this. We are really looking forward to getting to the point where farms can use this technology and it can benefit them.”