using pesticides safely and effectively is ensuring the product goes where it is intended to go. 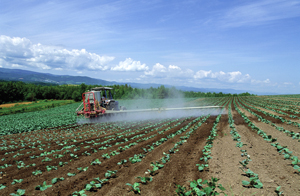 An important part of using pesticides safely and effectively is ensuring the product goes where it is intended to go.

A little care and attention to factors like spray drift will help ensure pesticide applications on your farm are carried out in the safest, most efficient manner, according to Integrated Cropping Management Systems Specialist Dale Risula at Saskatchewan Agriculture and Food.

“Weather conditions are most important – especially wind speed, atmospheric stability, temperature and relative humidity, with wind speed being the most critical,” he said. “We would caution people not to spray in significant winds. The threshold wind speed depends on the type of equipment that is being used. Different nozzles, of course, will apply different concentrations of herbicides and carrier volumes. The most common carrier is water.”

For instance, if someone is using a number 8001 tip or nozzle, they will apply 50 litres per hectare. Under the influence of a 10 kilometre an hour wind, the pesticide applicator will lose three per cent of the material sprayed to off-target drift. If the wind increases to 20 kilometres, it doubles the drift to six per cent. And if the wind triples to 30 kilometres an hour, the drift goes up to 11 per cent.

Risula points out that “although high wind speed is an obvious cause of drift, other factors also have an influence. One of these is an inversion.”

Inversions occur when a layer of warm air is trapped beneath cool air and conditions are dead calm, which typically occurs at night. They can also be associated with a change in wind direction, adds Risula.

“The boundary of the inversion traps a concentrated spray cloud or mist which hangs over the treated area. When inversions break, the movement of the trapped air can be unpredictable, and the spray might move over a sensitive crop.”

Applying pesticides under conditions in which they are less effective, such as temperature extremes or prior to a rain, might require the producer to make a second application, thereby increasing the risk of damage and increasing costs significantly.

Risula invites producers to take into consideration all of the fundamentals of the spraying operation when preparing for a pesticide application.

“These include water volume, spray pressure, travel speed and nozzle height. Reduced spray volumes, higher pressures, higher travel speeds and greater distances of the nozzles above the target each produce higher risk of drift. Some people use shrouds to reduce the influence of the wind. Water volume, travel speed and pressure are linked and are influenced by the nozzle that is used. The nozzle and pressure dictate droplet size or coarseness of spray and therefore risk of drift.”

Because nozzles provide such varying levels of spray coarseness, countering the potentially negative effect of spay drift is very much a function of choosing the right nozzle for the job and the intended target.