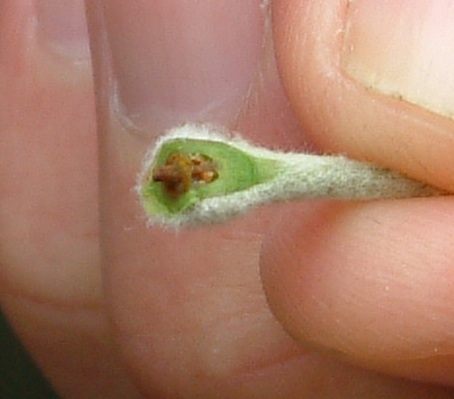 Frost damage to inside of an apple blossom.

May 11, 2012, Vineland, Ont – Ontario’s apple and tender fruit growers are appreciative of the concern and support they’re receiving from consumers, media and the provincial government as they assess unprecedented weather damage to this year’s crops.

Ted McMeekin, Ontario Minister of Agriculture, Food and Rural Affairs, met with industry leaders today while touring a Beamsville-area orchard to get a first-hand look at the widespread damage that has affected farmers across the province.

“We’d like to thank the Minister for meeting with us today and personally viewing the extent of some of the damage,” says apple farmer Brian Gilroy, chair of the Ontario Apple Growers. “We also appreciate the outpouring of concern and support from consumers and media. The spin-off effects of this crisis will be felt far beyond the farm gate.”

The summer-like weather earlier this year brought blossoms early, leaving them vulnerable to recent frost and cold temperatures. Frost damage results in some trees not bearing any fruit, and if they do, at much lower yields than normal. Some fruit will have visible damage.

Although farmers are most directly affected, impacts will also be felt by farm workers, marketers, suppliers, retailers and ultimately, consumers. Initial assessments indicate up to 80 per cent of the province’s apple crop has been affected, as well as an estimated 30 to 40 per cent loss in peach production and a virtually complete devastation of the cherry and plum crops.

“We won’t know the full extent of losses for another few weeks, but we’ve never seen damage this widespread,” says Phil Tregunno, chair of the Ontario Tender Fruit Producers’ Marketing Board, which represents growers of peaches, nectarines, pears, plums, seedless coronation grapes and chilled and pitted cherries. “There are some government programs available to assist farmers, but there are gaps and we will need the government to work with us to ensure support for affected growers.”