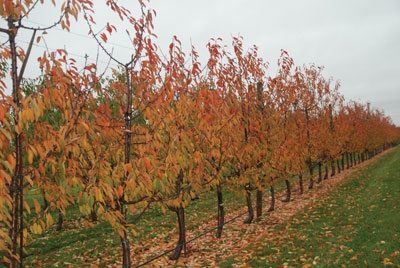 Registration of a new growth retardant for use on sweet and tart cherries in Canada was approved for the 2013 growing season. Apogee will reduce vegetative shoot growth (Basak and Rademacher, 2000) and may be particularly beneficial to those planting at higher densities or beneath tree covers (Figure 1).

It is especially important to read the product label for the recommended use and precautions associated with Apogee. The label can be found online at the BASF Canada Inc. website (www.agsolutions.ca) or by searching the PMRA website.

Apogee contains 27.5 per cent (w/w) prohexadione-calcium, a gibberellin biosynthesis inhibitor. Prohexidione-calcium reduces terminal growth by inhibiting the synthesis of growth-specific gibberellins, a group of plant hormones that are primarily responsible for regulation of terminal growth in cherry trees. Once applied, Apogee requires about 14 days to slow growth. It degrades within the tree within a few weeks, so a repeat application may be necessary to extend growth control.

Patterns of terminal growth and fruit set characteristics differ among growing regions. Likewise, the response to Apogee may differ depending upon the where it is used. As a result some growing areas may use the high end of the label, while others find the low label rate is effective.

Consider using Apogee if short-term seasonal growth control is desired. Since tree vigour is also influenced by rootstock, cultivar, orchard system, soil type, climate, and soil moisture, these factors should be considered initially for long-term vigour control of sweet cherries. Some may question using plant bioregulators to reduce shoot extension growth given the availability of size-controlling rootstocks on the market. However, observations that size-controlling rootstocks have led to poor tree anchorage, excessive fruit set, or poor fruit size – especially when self-fruitful cultivars are grown – have been made, particularly in suboptimal tree growth conditions. Mazzard and Mahaleb remain the most common (seedling) rootstocks in use in Ontario today for sweet and tart cherries, respectively and therefore Apogee® can play a role in the management of these orchards (Figure 2).

Research at the University of Guelph, Simcoe (Cline, unpublished data), and Agriculture and Agri-Food Canada, Summerland (Guak et al., 2005), as well as in the Pacific Northwest (Elfving and Lang, 2005; Elfving et al., 2003, Elfving et al., 2004) and Europe (Manriquez et al., 2005; Jacyna et al., 2012), has demonstrated that Apogee can reduce current season extension shoot growth of sweet cherry trees. Much of this research was conducted using separate and combination sprays of prohexadione-calcium and Ethephon. While Ethephon is commonly used as a ripening agent to aid in mechanical harvesting of tart cherries, combination sprays for growth control with Apogee are not currently approved for use on the Canadian product label.

For sweet cherries, growers can expect a significant reduction in terminal shoot growth – ranging from 20 to 50 per cent in a given season (Figure 3) – by using Apogee at the proper timing and concentration. This should help reduce the time required to dormant prune as well as open up the tree canopy leading to improved spray coverage and reduced disease pressure. This may be very useful in 2013 as many cherries trees had few or no crops last year and had considerable vegetative growth. As limited research is available on the response of Montmorency tart cherries to Apogee, the recommendations in this article are limited to sweet cherries.

Time of application and rates
Terminal shoot growth in Ontario proceeds rapidly usually during the first six weeks of the season. Since two weeks are required for Apogee to slow growth effectively, it is essential to make the first application when terminal shoots are no longer than 2.5 to 5 cm. This typically coincides with late bloom, when sufficient leaf area has developed for prohexadione-calcium to be translocated into the leaf. Satisfaction from the use of Apogee will depend upon making the first application at this time, and no later. It reportedly has no detrimental effects on bees, so the first application can be made before bees are removed from the orchard.

The label recommends 45 g formulated product per 100 L of dilute spray (which equates to 125 ppm or 125 mg/L of active ingredient) and spraying dilute (up to 3,000 L/ha). A repeat application should be made 14 to 21 days later – this is important. Sprays are limited to a maximum of two sprays per season and a total of 2.7 kg of formulated product/ha/season. Based on the 125 ppm rate and a tree-row volume (TRV) dilute rate of 2,000 L/ha, 1.8 kg of product per hectare (728 g/acre) will be required.

Follow the steps in the product label to adjust rates for tree-row volume dilute applications. Apogee has been used effectively on apples when applied in water volumes less that TRV, provided thorough coverage is achieved. However, spraying of concentrated plant bioregulators beyond 1X TRV is not generally recommended.

Adjuvants and hard water
A spray adjuvant (Agral 90, LI-700) should be included to improve plant uptake of the prohexadione-calcium molecule. In addition, where a high calcium or magnesium water source (hard water) is used, it is important to include an equal amount of ammonium sulphate (AMS) fertilizer by weight with Apogee. A high-quality grade of AMS (i.e., greenhouse grade) is recommended to avoid plugging of nozzles. This is readily available from suppliers such as Vineland Growers and Plant Products for around $25 per 25 kg bag, representing inexpensive insurance to ensure product efficacy. If you do not know the hardness of your water and are on a municipal water system, the water supplier can tell you the hardness level of the water it delivers. If you have a private water supply, you can have the water tested for hardness for a fee. See the Ministry of the Environment website, under Resources at http://www.ene.gov.on.ca/environment/en/resources/STDPROD_096104.html for a list of accredited labs and use the last column in the table to determine which labs are accredited for inorganic analysis.

Tank mixing
The Apogee label recommends that calcium sprays not be tank mixed with Apogee. This warning is especially appropriate for calcium chloride and other calcium-containing products. In the presence of calcium, Apogee may precipitate in the tank, clog nozzles and screens, and reduce tree response.

Other precautions
Effects of Apogee on fruit set, fruit size and yield are inconsistent based on results reported in the literature. Several studies have reported a resurgence in late-season growth in some situations when marked suppression of growth was achieved early in the season. Furthermore, some resurgence in growth the year following application has been observed.

Therefore, fine-tuning of treatment timings and concentrations may need to be considered.

The suggested strategy for using Apogee on cherries in 2013:

Dr. John Cline is an associate professor of pomology with the University of Guelph. He is based at the Horticultural Experiment Station in Simcoe, Ont.

Related
BC cherries to get a local push
Researcher examines use of Apogee in strawberry production
Crop load, nutrient management practices to prevent bitter pit in Honeycrisp
Early peaches in ON and BC expects tons of cherries
Tags