John Fedorkow of Fruithaven Farms has been named the 2019 Grape King. 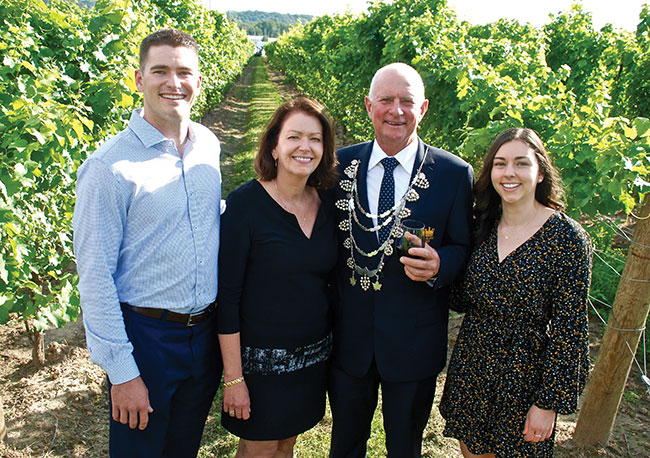 John Fedorkow, second from right (shown here with his son Michael, wife Debbie and daughter Camille), is the 2019 Grape King.

For 20 years starting in the mid-’80s, Fruithaven Farms near St. Davids, a community in Niagara-on-the-Lake, Ont., had been a pick-your-own operation and then hosted school apple picking groups. Back then, visitors were greeted by fields of strawberries and raspberries and currants, peas and beans and orchards of apples, peaches and pears.

Today, 75 acres of the 104-acre farm is planted to grapes with more to come. Another six acres is dedicated to high density pears and a couple of acres of yellow and blue plums. Most wine grapes are Chardonnay and Cabernet Sauvignon grapes and Cabernet Franc grapes grown under contract for Peller Estates Winery and Creekside Winery.

“Oh boy, they struggle. One cold night and you’re done,” Fedorkow says about the threat of winterkill.

This fall, Fedorkow, 62, was named the 2019 Niagara Grape King. Organized by the Grape Growers of Ontario, the grape king represents a 60-plus year tradition in Ontario’s grape and wine industry. The title of Grape King is bestowed upon an Ontario grape grower who exemplifies excellence in the vineyard.

Nominees for grape king must have a working knowledge of vineyard management and the grape growing industry. Nominated vineyards are judged by industry experts from the Ontario Ministry of Agriculture, Food and Rural Affairs and the University of Guelph, and are rated on a point system based on the following criteria: cultivars, diseases, insects, weed control, soil management, canopy management, overall quality of vineyard, outreach, and miscellaneous. The Grape King is an ambassador and an advocate for all grape growers across Ontario.

Fedorkow believes he may be one of the oldest grape kings in the history of the event. A coronation ceremony was held at his farm in mid-September and was also the kick-off event for the Niagara Wine Festival, a two-week festival promoting Ontario’s wineries.

To be named the grape king, fellow growers nominate someone who they feel deserves the title. While the eventual grape king very often knows who nominated them, they generally won’t say, and this year’s king is no exception.

“Anyone can nominate anybody. It’s one of your peers who feel you deserve it.” Fedorkow says, adding it’s not so much a competition as it is networking by growers. “That’s where you learn a lot. I suppose we used to be competitive among ourselves and now we have to be competitive with the rest of the world so we have to work collectively or we won’t survive.”

In early August, just as the grapes are ripening and changing colour, a panel of three judges from academia dropped by to poke and prod through the vineyards of a handful of nominees looking for good vineyard management in eight different technical categories. 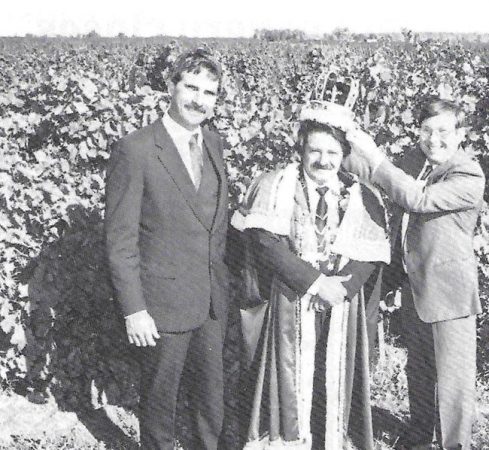 Fred Hernder, 31, of St. Catharines, Ont., was crowned the Grape King at the Niagara Grape and Wine Festival. Hernder was the youngest grape grower to ever win the title. The Grape King is selected by a panel of experts who judge which of the contestants have the best vineyard. 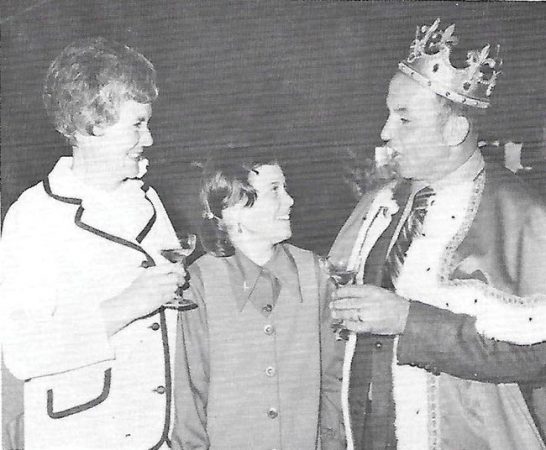 Jack Forrer of Niagara-on-the-Lake was crowned as Grape King in September 1972. Forrer operated a 104-acre farm where he had more than 50 acres of vineyard, growing 10 different varieties of grapes for wine making.

All things being equal, the scales are often tipped in two less-clinical categories – outreach, which is collaboration with researchers in academia; and innovation which is a grower’s independent research, adapting new technology and being up-to-date on new information in the industry.

“There are a number of growers who tend to turn their farms into experimental projects and they know enough to stay away,” says Helen Fisher, a retired University of Guelph professor, about Fedorkow and other growers who are eager to participate in research projects. By “stay away,” she means they don’t accidentally encroach on a research project being conducted in their vineyard.

Fedorkow’s grandfather came to Canada from the Ukraine at the beginning of the First World War and then returned after the war to his homeland. He came back to Canada first settling in northern Manitoba, and then in Niagara in the early ’30s to raise a family. Fedorkow’s father did what most other growers did at the time – grow peaches, cherries, plums and pears for the fresh market and numerous canning plants in Niagara at that time.

The family farm where Fedorkow grew up was sandwiched between the expanding community of St. Davids and the non-expanding base of the Niagara Escarpment. By the time he graduated from the University of Guelph with bachelor of science degree in agriculture majoring in horticulture, it had shrunk from 122 acres to just 25 acres – not enough land for a viable farm operation.

“I’d been working on it since I was 12 and wasn’t coming back to farm anyway,” he says.

So, he looked for work elsewhere and found a job as a fieldman with a chemical company that sold herbicides to grain growers in Alberta. Two years later, he landed a job as a sales representative in Ontario for Chipman Chemical with a territory north of Toronto that included the Holland Marsh.

What is now Fruithaven Farms was once a run-down mixed-use cattle farm. Fedorkow purchased the farm in 1984.

“It was an old, old farm and a mess with scattered fruit trees, pastures with old fence lines and a block of grapes almost 100 years old.”

After several years of rehabilitation and hard work, Fedorkow has restored Fruithaven Farms to be a standout vineyard. Now as the reigning grape king, he looks forward to the coming year and playing an active role as an industry advocate.