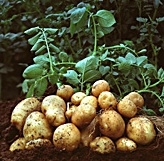 August 15, 2017 – The Council of Canadians is pressing the provincial government to keep genetically modified potatoes out of P.E.I. soil.

Council chair Leo Broderick questions the science behind Innate generation 2 potatoes, and added P.E.I. would be better off staying away from the controversy surrounding genetically modified food. He noted P.E.I. is already attracting attention as a producer of genetically modified salmon. READ MORE