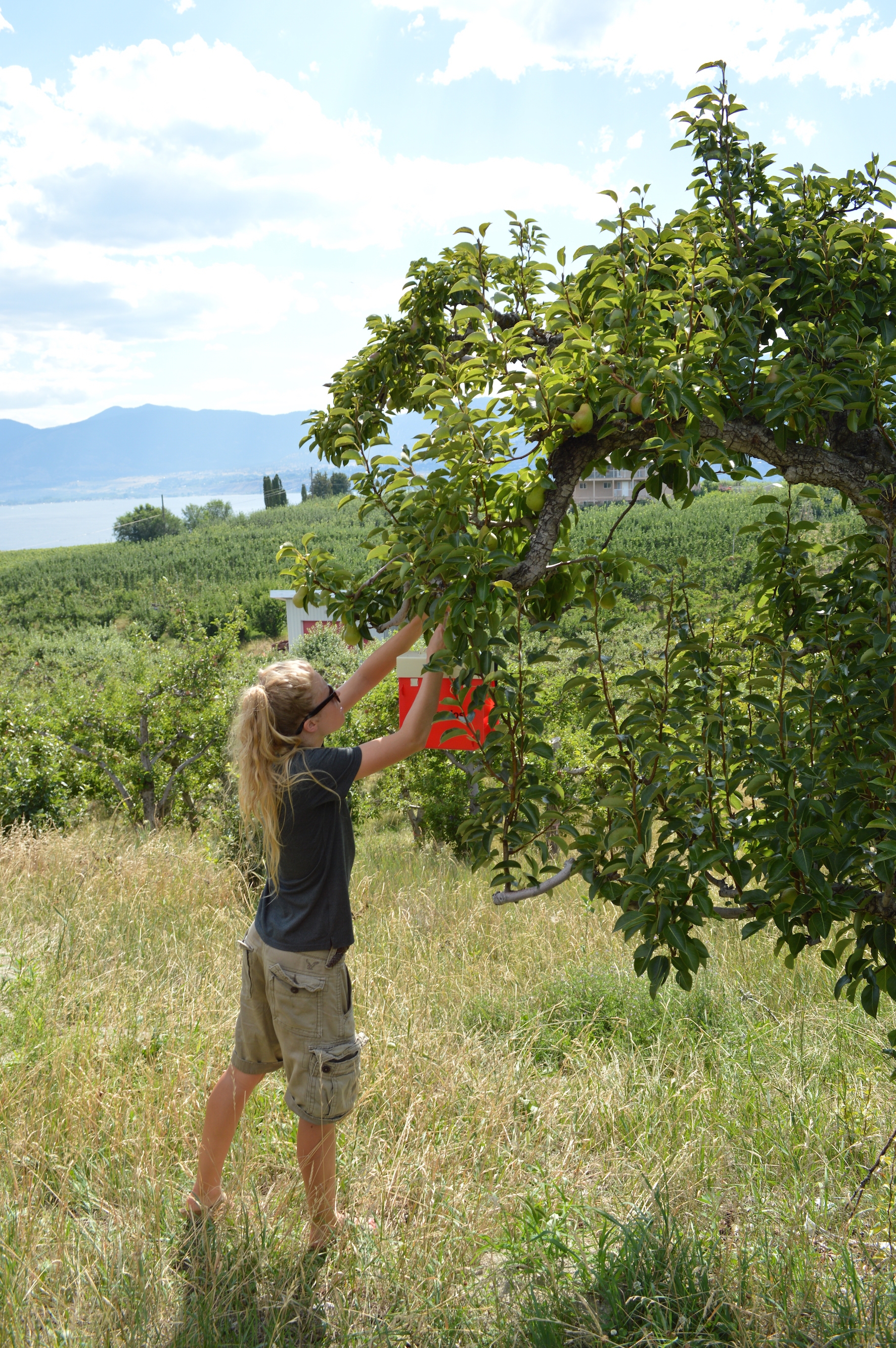 May 15, 2015, Clarington, Ont – Algoma Orchards is the largest independently owned apple grower and packer in Canada. With more than 1,000 acres and another 50 growers in Ontario, they supply apples and apple juice to many parts of the world year round. To make this happen efficiently, Algoma has a 100,000 sq. ft. state-of-the-art packing and sorting facility that can pack 800 boxes of apples an hour.

Codling moth is the most common pest found in apple orchards and an issue that every apple and pear farmer has to deal with. Controlling this insect is tricky, largely due to their feeding habits. Pesticides have been the traditional form of control, but that comes with a few drawbacks, including a hold on re-entry into the field for workers due to toxicity regulations, killing of other useful insects like pollinators, high cost and the potential health risk to the consumer.

A new option for farmers is the use of pheromones. Semios CM-Plus pheromone confuses the male codling moth during its reproductive flight so that it is unable to find the female to fertilize the eggs, thus diminishing the pest population. While pheromones have been used in agriculture before, the ways in that they were deployed were neither efficient nor reliable, until now.

Algoma Orchards was one of 50 farms in Canada to embark on a trial to measure the effectiveness of these pheromones. A control block of 30 acres continued with conventional pest management while 35 acres were setup with 42 pheromone dispensers.

“Typically dispensers are hung in one tree per acre, but the farmer informed us of a hot spot, so we doubled up in this area,” said Jordan Hazell, Semios field biologist.

To monitor this hot spot and other key areas, three camera-equipped insect traps were added and controlled remotely with the aid of a unique patented wireless network. Traditional wireless networks for tree crops have never been reliable, as leaves interfere with the typical radio wave.

“Now that we have conquered this hurdle, tree crop farmers are able to see the field conditions remotely at any time and can now utilize both real-time and historical on-site information to make more informed decisions,” concluded Hazell.

The pheromones are in aerosol form and are turned on just prior to the predicted moth flight. The traps aid in this decision and also give peace of mind knowing that no moths are yet in flight prior to the pheromones being turned on. Codling moth are most active from dusk to dawn so in this case the dispensing of pheromones was set from 5 p.m. to 5 a.m. on a 15-minute dispensing interval.

Through the online user interface called Semioslive, Algoma had access to the status of the field from any device with an Internet connection. This meant the growers could remotely view trap catches, on-site weather data, and monitor or adjust the dispensing schedule remotely, alongside Semios, which monitors the system 24/7. The ability to remotely control each dispenser means the pheromones are only in use when needed, so they last longer, making it a very cost effective pest control solution.

The system took Semios 12 hours to setup and ran for the duration of the growing season from May to September. Since Algoma’s trial site was being utilized for registering Semios CM-Plus, delta traps containing codling moth lures were installed evenly at a density of 1.4 traps/acre. This gave a very detailed look at where moth pressure was the highest and was used to validate consistent pheromone coverage across the entire block. These traps were manually inspected weekly and a moth count was recorded for each trap. The lure contained in each delta trap represents a female, so if the male moths cannot find the traps, it indicates they cannot find the females, meaning the pheromones are effective. Trap shutdown, which is the reduction in trap catch observed between the Semios CM-Plus and control blocks, is the standard measurement for mating disruption. In Algoma’s case, the trap shutdown was 97 per cent, with only 0.17 moths caught in a trap on average over the entire season.

Damage assessments were also conducted by visually inspecting 10 randomly selected apples on 100 different randomly selected trees (1,000 apples in total) in each block. When exterior damage to an apple was observed, the apples were cut open to inspect for larvae or subsequent damage to confirm if codling moth was the culprit. Damage assessment for the Semios CM-Plus block was zero.

“The pheromones worked so well in the trial field that we didn’t need to use any pesticides,” said Manus Boonzaier, farm manager for Algoma Orchards. “The control block in which no pheromones were used required multiple sprays.”

Algoma plans to continue using pheromones as part of their pest control management.