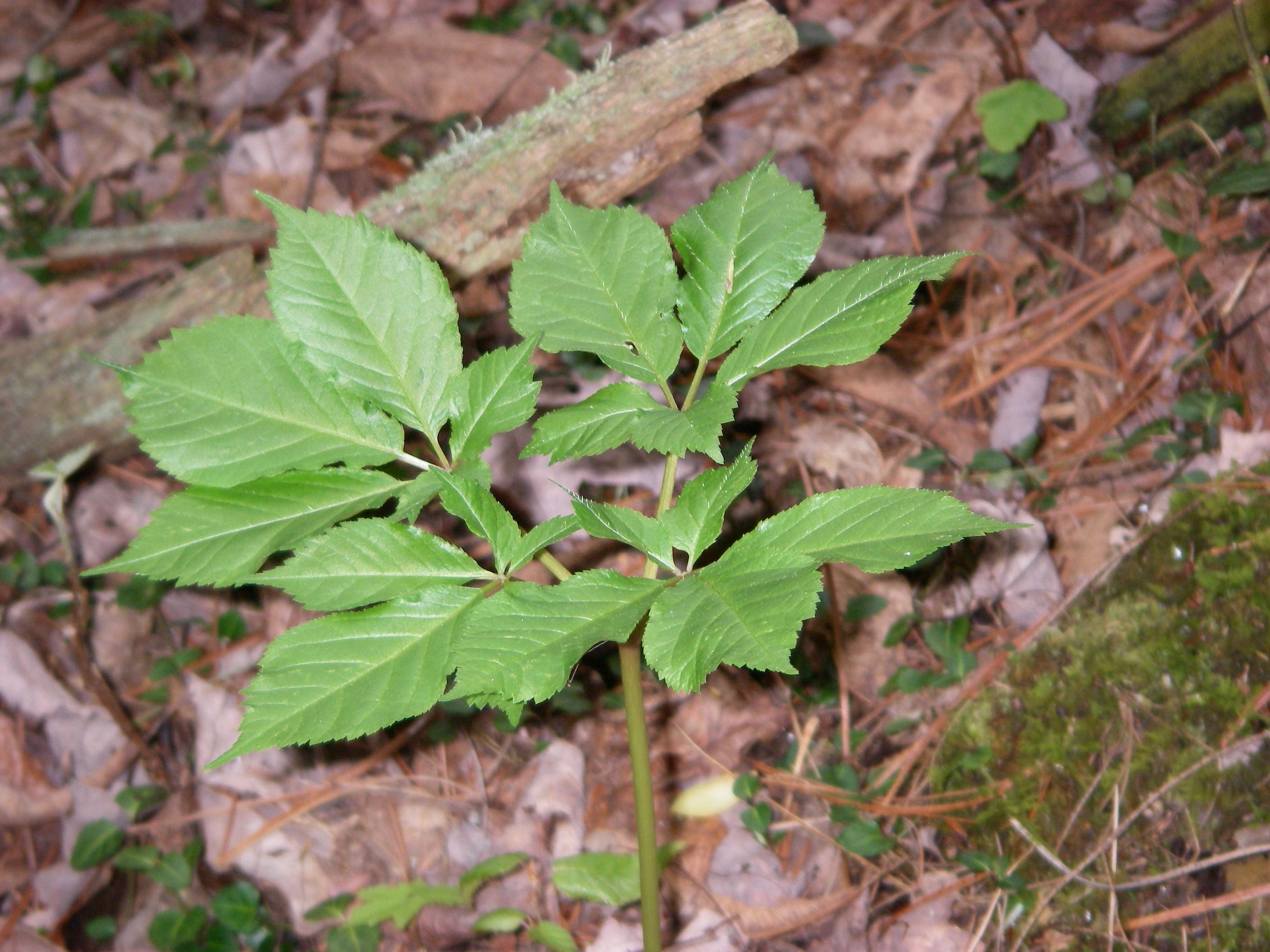 March 25, 2014 – Over the past few weeks, the Ag-Info Centre has experienced an increase in the number of calls it receives about ginseng production. This is not the first time that this root crop has come up high on the information request list so let’s look at what makes it so attractive and why more people aren’t growing it.

American ginseng (Panax quinquefolius L.), the ginseng grown commercially in Canada, is a small, fleshy rooted perennial native to Eastern North America. Grown from seed, ginseng is typically harvested three to four years after its initial planting, when it is largely considered mature. Preferring well-drained soils, it is primarily found under the canopies of large forests, with approximately 70 to 80 per cent shade coverage. In commercial production, large shade clothes are used to cover large growing areas to simulate appropriate conditions for this valuable little plant.

While ginseng has only been grown commercially in Canada since the 1700s, it has been in wide use in Asia for over 2000 years. It is commonly thought to be an adaptogen herb, meaning that it works in promoting stabilization of the body’s natural rhythms. According to the Ontario Ginseng Growers Association, nearly all the ginseng in Canada is produced in Ontario, with more than 140 growers producing four million pounds (1.8 million kg) each year. Of this, 90 per cent is exported to Asia for commercial use. There is a small amount of commercial production in British Columbia as well, but this has dwindled in previous years due to declines in price and markets. Often referred to as “Man Root” in Asia, a direct reference to its humanoid shape, the value of ginseng roots are based on a number of subjective criteria including how “man shaped” they are, colour, size, texture, etc.

“There are a number of potential reasons for the sudden resurgence of interest in ginseng; however, the majority relate to commodity prices,” says Dustin Morton, commercial horticulture specialist with Alberta Agriculture and Rural Development. “Field crop prices, which have been very good for the last couple of years, have bottomed out again and producers are looking for potentially more lucrative options. Currently, ginseng prices, which are always incredibly volatile, are at near-record highs. While price is based on the previously mentioned criteria, it also involves how it is being delivered; cleaned and trimmed roots will command a much higher price than roots pulled straight from the ground.”

Currently, prices range anywhere from $17/lb to upwards of $200/lb with an average of $40 to 50/lb. While prices have risen for the last number of years, there have been a number of years where producers have received as little as $8 to 10/lb for their product. These low years typically outweigh the higher priced years, resulting in massive losses and reliance on income from other crops, such as tobacco and orchard crops.

At the current price of $40 to 50/lb, with an average crop producing up to 3,500 lbs/acre, it is not difficult to see why there is so much interest in growing ginseng. This optimism should be tempered; however, by the expenses incurred in the production cycle. The Government of Ontario has roughly estimated these costs to be $57,000/acre (over three years). This price does not include the cost of renting land (on which ginseng can only ever be grown once) or specialty equipment such as dryers and sprayers. Couple this with the fact that there is no revenue for a minimum of three years, which is the time it takes to grow a single crop, and it becomes less economically feasible for most growers.

American ginseng has a broad habitat, from North Eastern Ontario and Quebec south to Louisiana and Arkansas. While wide ranging, it is generally considered a Zone 3 plant at best, but better suited to Zone 4. While some areas in Alberta are appropriately zoned, crop survival has historically been low because of harsh winter weather and drying winds. Producers looking to diversify with ginseng may also be surprised to find that it grows better in a very well-drained, slightly acidic soil. Alberta soils are typically more basic or alkali and are difficult to buffer without significant application of inputs. Furthermore, the plant’s requirement for shade demands the construction of semi-permanent shade structures to maintain the crop. While the expense of erecting this structure has been factored into the above expense summary, its maintenance through Alberta’s tumultuous summers has not.

“While ginseng prices are at all-time highs, Alberta producers looking for ways to diversify their operations may have better luck with other crops,” says Morton. “Market subjectivity, high input costs and less than perfect environmental conditions make ginseng a very tough sell on the prairies. Ginseng is not a quick cash crop; however, as with most things in farming, success is possible with lots of planning, hard work and a little bit of luck.”